Thumbs up or down?

Soft drink brand Thums Up is bringing in real-life sports heroes for its latest campaign. With colas losing fizz globally, can these athletes help the brand keep its thunder intact in India? 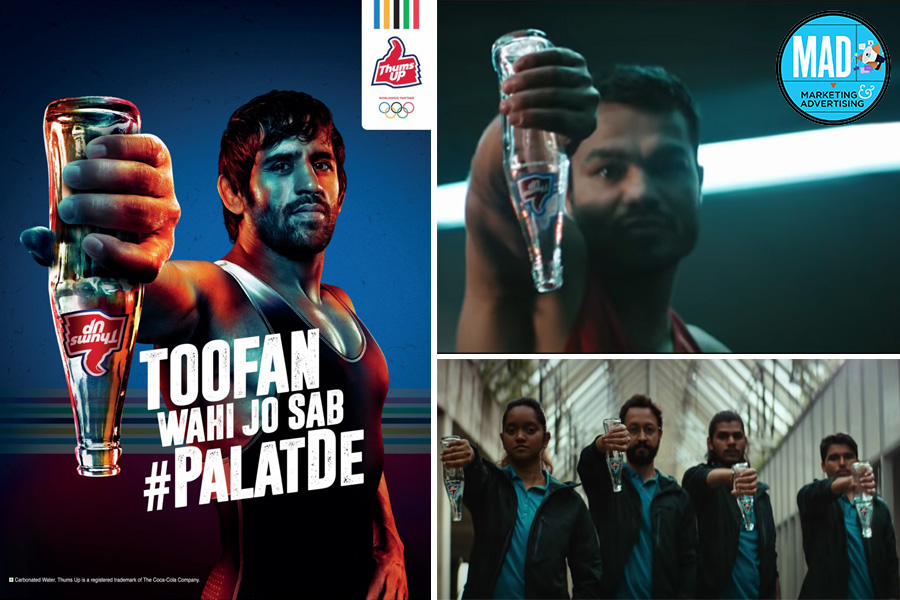 Soft drink brand Thums Up is bringing in real-life sports heroes for its latest campaignIt was action time for the global hero in June. Cristiano Ronaldo was all set to take questions at a press conference ahead of the opening UEFA Euro 2020 match against Hungary in the third week of the month. Within seconds, the Portuguese skipper shot at his target. Miffed to see two Coca-Cola bottles lying in front of his microphone, Ronaldo pushed them aside, picked up a bottle of water, and raised a battle cry by saying ‘Agua’—which means water in Portuguese. “No Coca-Cola,” he said.

A month later in India, it is action time for Indian sports heroes. Bajrang Punia, the only Indian wrestler to win three World Wrestling Championship medals, is the first to hit the mat. The celebrated grappler, who is representing India in the 65 kg freestyle category at the Tokyo Olympics, is seen gulping a bottle of Thums Up, the fizzy brand bought by Coca-Cola in 1993, in a commercial released last week. Punia then turns the bottle upside down. Other Indian athletes—shooter Manu Bhaker, boxer Vikas Krishan Yadav, and archer Deepika Kumari—follow suit and mimic the act.
A voiceover at the end of the advertisement drives home the message: ‘Toofan wahi jo sab palat de’ (the real storm is one that turns everything upside down). Thums Up, which has a tagline ‘taste the thunder,’ rolls out global partnership with the Olympic Games and aims to instil ‘thunder’ of hope among consumers.
The storm in the bottle is not hard to miss. Thums Up is making a transition from reel superstars to real heroes. A brand, which has had Bollywood actor Ranveer Singh as endorser since December 2016, is now conjuring up heroic tales of athletes who have battled odds to succeed. The fizzy brand—which had always oozed masculinity, banked on its distinct strong taste, and had wagered on the popularity and fictional brawn of actors Akshay Kumar and Salman Khan to woo masses—is now undergoing a change in its narrative.
Arnab Roy, vice president, (marketing), at Coca-Cola India and Southwest Asia, explains the shift. This year, he underlines, the brand is making an evolution from ‘pure physicality’ that it has been conventionally associated with to ‘real world heroism.’
“We believe the time for this change is now,” he says. India, Roy stresses, needs to celebrate its real heroes more than ever given the challenges it has been through over the last 18 months. Covid-19 has drastically altered consumer behaviour and has impacted marketers around the globe. “The time is now for us to rethink and re-imagine our communication strategies,” he says.
The new campaign will celebrate stories that depict Indian athletes showing the challenges a ‘thumbs down’ by turning an empty Thums Up bottle upside down. The uplifting tone of the commercial, Roy explains, complements Thums Up’s repositioned brand message of resilience and real heroism of everyday people.
Ironically, the latest campaign of Thums Up paints a contrasting tale of ‘two cola brothers,’ reckon marketing and branding experts. While Ronaldo’s ‘heroic pass’ last month led to Coca-Cola reportedly losing $4 billion in market cap; in India, Thums Up has managed to get top athletes as endorsers. The reason is a no-brainer.
Countries with high per capita consumption of colas will have greater involvement of people, more awareness about health issues, and higher propensity to roast brands. “In India, cola penetration is quite low,” says Harish Bijoor, who runs an eponymous brand consulting firm. When people are not deeply involved as a consumer, they do not question.
According to industry estimates, India's per capita consumption of soft drinks stood at 44 bottles in 2016, which pales in global comparison. The corresponding number for US was 1,496 bottles; Mexico had 1,489 bottles; Germany was a tad lower at 1,221 bottles and Brazil stacked up 537 bottles. Though the latest numbers are not available, it is believed that India almost doubled its count to 84 bottles in 2018. Even by conservative estimates, India is still thirsty for colas.
What has changed over the last few years, however, is the market and the opportunity. The action, and consumption, has moved to rural India—Bharat. In 2018, Coca-Cola reportedly managed to get around 35-40 percent of its sales from rural areas. “Rural sales have been growing for the past three years. We see increased potential in these markets,” Shehnaz Gill, Coca-Cola India and Southwest Asia senior VP (operations), had then remarked.
Cut to 2021. With rising obesity among kids and adults in urban India and consumers taking a hard look at carbonated drinks, cola brands have started playing on the optics and looking for greener pastures. “You can’t sell colas on functionality, can you?” asks Bijoor. So the option is to make an emotional connect, which can either be fictional by pitching it as a ‘refreshing’ drink or can be real by piggy riding on the success stories of Bollywood celebs, cricketers and athletes. “That’s the only way to make it appealing,” he adds.
Advertising gurus, however, reckon that Thums Up needs to come up with a sharper brand positioning. One of the reasons is failure to use actor Ranveer Singh well in the commercials. “He is a good celebrity but you need to utilise him properly,” KV Sridhar, global chief creative officer at Nihilent Hypercollective.
What the brand always aimed at conveying—thrill, masculinity, fizz—was credible. “Look at the commercials featuring Singh. They look incredible. It’s not his fault,” he says. Over the last few months, Thums Up has been running TV commercials just showing the bottle, oozing fizz and a sound byte that plays the iconic tagline ‘taste the thunder.’ “But where is the thunder?” asks Sridhar, who once worked on the commercials of Thums Up. If you do not understand what the brand stands for, then you end up diluting the DNA of the brand, he adds.
Meanwhile, Thums Up is definitely managing to grab eyeballs in the ongoing Tokyo Olympics. While Thums Up cans are amply visible inside the Sony studios during the Games, the advertisement has managed to share space with India’s medal contenders during live coverage on TV. The cola brand, it seems, is doing whatever it takes to cheer up the Indian contingent and in turn keep its fizz intact.