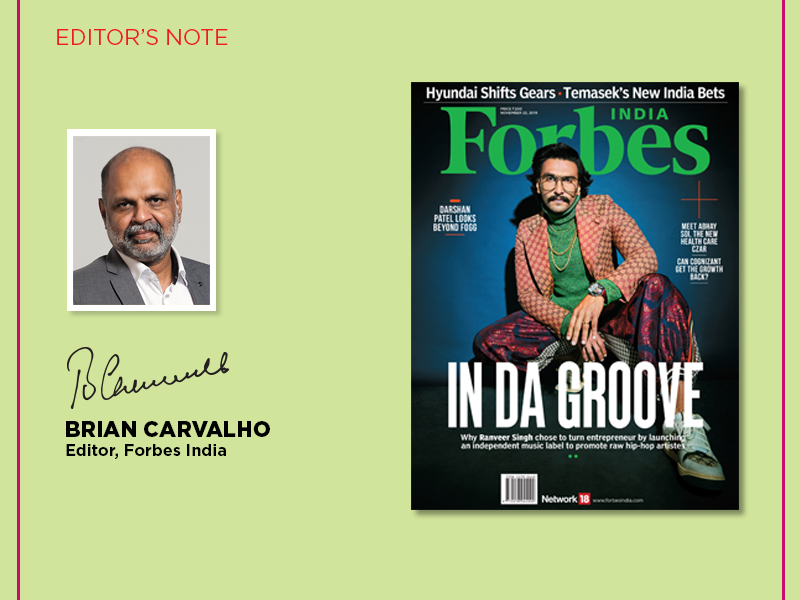 Kiefer Sutherland, perhaps best known for his roles in Young Guns and A Few Good Men, took a not-so-common detour at the peak of his career in the early 2000s, when he launched record label Ironworks with best friend Jude Cole. The objective was to help local musicians distribute their music.

Remember, this was the age when the internet was changing the way music was being consumed and shared, with the emergence of internet radio and streaming services like Pandora and TuneIn. Such platforms were a boon for unknown musicians to find an audience without the backing of a big music label.

After signing on a bunch of artists over the next several years, Sutherland would go on release his own album on the Ironworks label in 2016. Sutherland, now 52, hasn’t abandoned his acting career, featuring in films like Flatliner (2017) and Where is Kyra (both 2017), and TV series Designated Survivor.

Now cut to Ranveer Singh, Bollywood’s poster boy on this fortnight’s cover of Forbes India. Singh, 34, completes a decade in the Indian film industry next year, and his last release, Gully Boy, is India’s official entry to the Oscars. Perhaps it’s the film, about how an underdog from the Mumbai ghettos hits the big time as a rapper, that got Singh thinking about his maiden business venture.

Earlier this year, Singh and best friend Navzar Eranee launched IncInk, an independent music label to promote raw hip-hop and rap artistes. Kunal Purandare, who’s written the cover story on Singh’s uncommon entrepreneurial story—it’s not about sports or apparel—says it’s more than just a business for Singh. It’s about encouraging, as Singh puts it, “free creative expression... music that’s potent, that the youth can connect with”. To, with apologies to Eminem, lose yourself in the story (and the music), go to ‘Ranveer Inc(Ink)’ in the issue.

The Diwali festivities would have brought some much-needed cheer to the automobile industry, but the year so far has been a disaster with sales down by nearly 25 percent. A revival is at least 10 months away. So what should carmakers be doing till then? Hyundai Motor India, for its part, is doing plenty: New launches, an electric touch, and innovations around connected driving and shared mobility. As Hyundai Motor India MD and CEO SS Kim tells Manu Balchandran, who has written the feature that succinctly captures India’s No 2 carmaker’s over-two-decades-long India ride: “At the time of a market downturn and low customer sentiment, every company needs some breakthrough.”

Also journeying along is Temasek, the Singapore Government-owned global investment fund that bet on India as an emerging market back in 2004. So far, it has invested some S$11 billion (roughly ₹57,000 crore) in India in the past 15 years. Pooja Sarkar met the Temasek top brass in India to see in which sectors the next wave of India investments are going to be in. Don’t miss ‘Singapore Sting’.

Growth is what India promises and, the current slowdown notwithstanding, the levers for companies in various sectors are many. Consider IT services, for instance, which has had to reckon with a major disruption in the tested model of maintaining back-end IT infrastructure in the digital age. Harichandan Arakali dives into Cognizant, the Teaneck, New Jersey IT services giant, with a bulk of its operations in India, and how it is counting on strengthening the digital mix to kick-start growth.