Can India's ultra-rich families step up and give more?

For wealth-creation to reflect in terms of thoughtful giving, the rich need to strengthen intent, and be supported by infrastructure, transparency, peer groups and data. A new network for family philanthropy wants to put the pedal to the metal 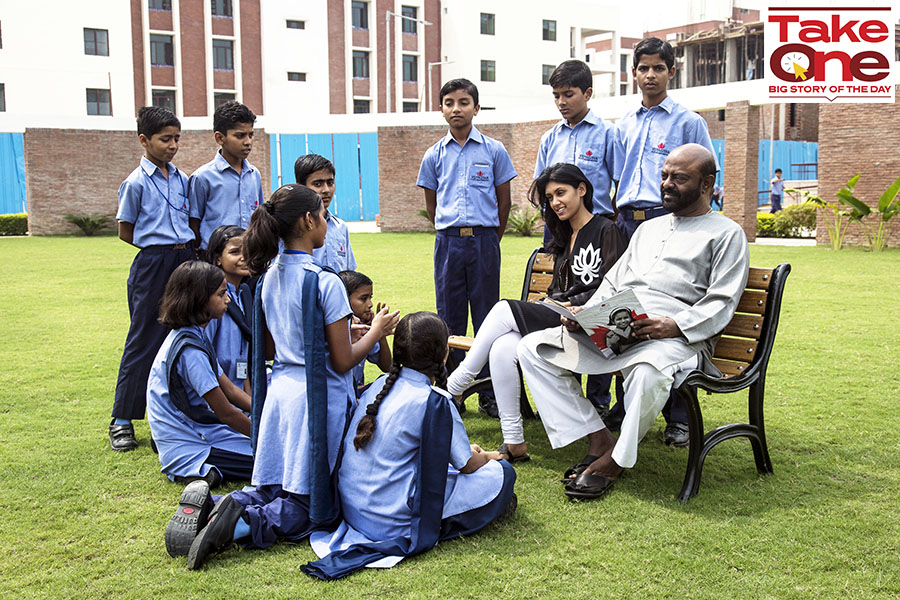 Rajan Navani recollects how different generations of his family at the Jetline Group have thought differently about giving back to society.

For his grandfather, it was building a livelihood from scratch after the Partition of 1947, and securing wealth for his immediate and extended family. For his father, it was about helping build up local communities. For him, says Navani—who is the founder of digital entertainment and technology company JetSynthesys—the focus has been to not just give money, but also his time, skills and expertise to social impact initiatives across the country. “And my daughter, the fourth generation in the family, has already started thinking strategically about social problems and their solutions with a global perspective,” says Navani, who says that at least 10 percent of his family’s wealth is directed toward philanthropy every year, mainly towards causes related to skill development and job-creation.

Tara Singh Vachani also has a similar story. Growing up, “philanthropy had no label, it was spontaneous, need-based, ad-hoc and disorganised”, she says. Vachani, who runs Antara Senior Care and is the daughter of billionaire Max Group founder Analjit Singh, explains that even when the Max India Foundation was launched about 18 years ago mainly for executing Corporate Social Responsibility (CSR) initiatives of the company, there was no family philanthropy lens. “The Foundation was professionally-run, rather than family-run. Since I took over as trustee three years ago, the family lens has become stronger. Now we are more involved in what we do and how we carry out philanthropy as a family.”

Navani believes that having a strong philanthropic strategy is crucial as a family progresses from generation to generation. Philanthropy becomes a strong pillar in efforts to take a family’s legacy and values forward, he says. Both he and Vachani, however, agree that family philanthropy in India has barely reached its potential, and has a long way to go. There’s a lot more that the wealthy can do.

There’s data to back their viewpoint too. As per the 2022 India Philanthropy Report, overall family philanthropy, which refers to giving by ultra high net-worth individuals (UHNIs) and high net-worth individuals (HNIs), has actually contracted over the past few years. The report categorises UHNIs as those with more than Rs 1,000 crore of wealth, while HNIs are those with wealth between Rs 7 crore and Rs 1,000 crore.

India’s social sector funding stood at Rs 17.5 lakh crore in FY21, and about 93 percent of it is public funds (central and state social expenditure). Private funds accounted for 7 percent of total social sector funding, which is approximately Rs 100,000 crore. “Family philanthropy has contracted overall to form about one-third of the total private giving [in FY21] versus approximately 37 percent in FY2015,” says the report.

While the number of UHNIs in India have increased from 828 in FY20 to over 1,000 in FY21, and their cumulative net worth has increased by about 50 percent—from about Rs 60 lakh crore in FY20 to about Rs 90 lakh crore in FY21, their relative contributions as a percentage of wealth remain at a low 0.1 percent to 0.15 percent. “The pandemic could be a big reason for the overall contraction in traditional philanthropic causes getting grants by ultra-rich families,” says Gautami Gavankar, CEO - estate planning & trusteeship and head - family office, Kotak Mahindra Group. She explains that people did a lot of charity to meet the immediate urgent causes in the context of the pandemic, like providing relief to migrant labourers, helping with hospitalisation, oxygen supply, food etc., and thus the regular causes that they would have otherwise supported could not get the required support.

Also read: Why philanthropy needs to include a climate lens

Gavankar explains that while family philanthropy by UHNI and HNI families is among the growing segments, they take time to understand and analyse factors like the causes they want to give to, the strength and longevity of the organisations to support, and finally the quantum of donation. She says she works with three categories of philanthropists---UHNIs, HNIs and professionals. People in all three categories have the intention to give, she explains, but face challenges on choosing the right organisations due to lack of information many-a-times, and thus, there is limited ability to do due diligence on the projects.

Another reason for contraction in giving could be the prevailing socio-economic uncertainty. “Philanthropy thrives when people believe they are comfortable, their incomes will keep growing, future generations are taken care of, etc. When there is political or economic uncertainty, like volatile markets, it is bad for philanthropy,” Ingrid Srinath, director, Centre for Social Impact and Philanthropy (CSIP) at Ashoka University, told Forbes India in March.

To aid and accelerate the pace of giving by wealthy families, strategic philanthropy organisation Dasra and a group of philanthropists have come together to launch GivingPi, an invite-only family philanthropy network. To be launched in August, it aims to have 5,000 members annually giving $1 billion (approximately Rs 7,500 crore) to different social causes by 2030.

Right now, the minimum threshold is Rs 50 lakh for members and it can go up to any amount. “By 2030, if we have 5,000 families, that is roughly Rs 1.5 crore of giving on an average per family to reach a billion together. With an eight-year horizon, this number is quite achievable, given current and future wealth generation,” says Jyotirmoy Chatterji, head of GivingPi.

Like CSR, the idea is to make conversations around family philanthropy more mainstream. “Families have always been involved in nation-building in India. We want to bring back the collective wisdom and capital of these families to shape this broader philanthropic movement of sorts,” says Chatterji.

Amit Chandra agrees that India has a rich history of family philanthropy, with corporate family foundations like the Tatas and Godrejs practising outsized philanthropy for nation-building and social welfare around Independence years. “Then there was a period from the 70s leading into the 90s when newer wealth-creators did not necessarily step up to give away that much of their wealth,” says Chandra, managing director of Bain Capital Private Equity India. He is one of the country’s leading philanthropists and heads the ATE Chandra Foundation. The reason for this decline in family philanthropy, according to him, could be attributed to factors like unfavourable business environment and uncertainties in wealth creation, and also no newer role models to further the conversation around philanthropy.

Two major shifts in the past decade or so, however, have renewed focus on family philanthropy, according to Chandra. One is the IT boom and the resultant wealth creation in the industry, which has created a bunch of entrepreneurs like Azim Premji of Wipro, Nandan Nilekani and the other Infosys founders who look at wealth and their contributions to building society very differently. “We are now seeing a second big shift with entrepreneurs outside of the IT ecosystem entering the fold, from financial services to consumer technology,” he says.

As per the EdelGive Hurun India Philanthropy List 2021, the top three families to contribute toward philanthropy are Azim Premji and family with a contribution of Rs 9,713 crore, followed by Shiv Nadar and family of HCL Technologies at Rs 1,263 crore and Mukesh Ambani and family of Reliance Industries at Rs 577 crore [see Top 10 philanthropists table].

The India Philanthropy Report [IPR] 2022 says family philanthropy is expected to grow at 13 percent year-on-year until FY26, driven by increasing wealth and a rise in the number of technology entrepreneurs and younger generation of philanthropists. “There are a lot of dynamics in family philanthropy that we do not see, where decisions about giving often come from the patriarch or promoter of the company,” says Neera Nundy, co-founder and partner, Dasra. “But the next generation is engaging much earlier in philanthropy, wanting to do things differently, and thereby changing the dynamics of family giving.”

A network like GivingPi, she says, is “trying to bring a little more transparency and accountability in their giving… Can we have a better way in which families are comfortable and can give more by collaborating with each other and creating a peer group? This [network] will track family giving, see how it is growing over time and how we can enhance the impact of it”. In terms of encouraging disclosures of contributions, Nundy says they are taking a trust-based approach where they try to collect data on causes and donations while respecting confidentiality. “There is a whole movement around transparency and giving, and some of that will emerge here,” she says.

Building the infrastructure in the social sector should be a big focus area, as well as diversification in causes championed by families. According to the IPR 2022, 60 percent of family philanthropic spending went to education alone. Chandra says that for him and his wife Archana, who is the co-founder of the ATE Chandra Foundation and also runs the Jai Vakeel Foundation for intellectually challenged people, the priority has always been to look for underserved areas.

“Every few years, we ask ourselves how we can do things differently,” he says. For instance, he explains, if they find there are enough people working on capacity-building [one of their main focus areas at present], he and Archana would move on to other urgent causes that need their attention. “We look at the white spaces that exist in this space and fill those,” Chandra says.
Gavankar of Kotak Mahindra Group says regulations can also be more philanthropy-friendly, starting with tax benefits. “One of our clients wanted to donate a percentage of equity of his family company to a foundation as part of family philanthropy, but there are restrictions in holding equity shares in a charitable trust and thus he was not able to do that,” she says, citing an example. She further adds that changes are being done by regulators with the launch of social stock exchanges as a separate segment of a recognised stock exchange that is meant to serve private and non-profit sector providers by channelling capital to them and the ability to issue zero coupon zero principal instrument by a not-for-profit organisation.Chandra is of the opinion that while regulations do help, everything boils down to the intent. “Even if you miraculously increase tax dedication by three-fold, I’m not sure giving will also increase three-fold. The biggest incentive for philanthropy should be the desire to build a better society and there is no substitute to that.”

Tweets by @forbesindia
What to study at college? How about Harry Styles, Taylor Swift or The Beatles?
Vauld to seek moratorium against its creditors