Kahn, leading India's best-known agri-focussed venture capital firm, is readying for his third fund, at $150 million, to expand investments into game-changing startups in the sector 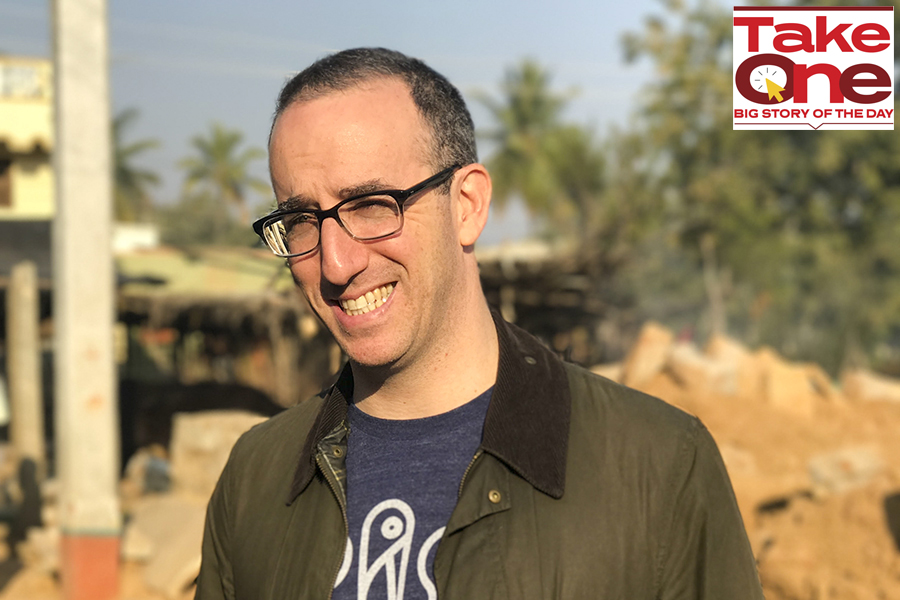 Mark Kahn’s exposure to India happened fairly early, growing up in parts of Houston, Texas, where there was a large ABCD (American-Born Confused Desi) community, he jokes. Later as a college student, he had visited India, and in fact a college internship was at ITC’s agri business unit. But the switch to venture capital, backing agri startups in India, wasn’t something he had seen coming, he says.
All along, he had expected that he would probably run a large agri-based company, and stints at Syngenta and Godrej Agrovet seemed to be preparing him for that. However, he got frustrated seeing the incremental, and sometimes ineffectual, changes happening in a sector that was 25 percent of the economy and accounted for 50 percent of the country’s population.
He wanted something that would bring step-jump change for the better, to the sector, and improve the lives of the millions of farmers in the country. But, back then, over a decade ago, “If you were an Indian startup and you were focused outside of what was conventional, which in those days was urban consumer or B2B software-as-a-service, you just couldn’t get funding. And we felt that that was insane.”
In 2010, Kahn teamed up with Jinesh Shah, who came from Nexus Venture Partners and really understood the lay of the land in the startup ecosystem, and started Omnivore. Kahn had been working in India from 2007, and the two knew each other because when Kahn was an EVP at Godrej Agrovet, Shah, who was CFO at Nexus, had contacted him while studying the agri business sector in India.
“Despite our personalities being very different, we really hit it off and decided to work together,” Kahn, 42, recalls.
At Omnivore, the idea was to try and transform the agricultural ecosystem through innovation. It didn’t seem like the big companies were really being able to do it, and they weren’t investing in R&D and everything was incremental. Kahn wanted to “shock the system”.
“I think it was my frustration with a slow moving status quo that forced me to go from operating an agri business to where we are today,” he tells Forbes India.
Omnivore’s first fund was $35 million and the firm invested in 13 startups, and 10 of those ventures are still doing business. One example is Stellapps Technologies, founded by five former Wipro executives to bring technology, data and analysis to the dairy supply chains in India.
“They have done a fantastic job, digitising, building a base layer of information across the dairy sector.” The Bengaluru-headquartered company works with almost all of the large private dairies and dairy cooperatives in India and has brought its technologies to around 50,000 village collection centres so far.
Ranjith Mukundan, co-founder and CEO at Stellapps, recalls meeting Kahn in 2012, perhaps, at an ‘Action for India’ conference and the following year Omnivore became the first institutional investor in Stellapps. Omnivore continued to invest in follow-on rounds and has invested about $4.5 million in the company.
“As perhaps the first ag-tech focused institutional fund in India, they have done some pioneering work,” Mukundan says. “They are very well networked in India, and internationally too, where they have some very good limited partners.” This helps portfolio companies to connect with good names in both Europe and the US and not only for finance but also to strike agri supply chain and technology partnerships, he says.
Another portfolio company from the first fund was MITRA Agro Equipments, which was eventually acquired by Mahindra Group. Dev Bajaj, who founded MITRA to make precision farm equipment, later on joined VC firm Kalaari, and is now is the head of investments as chief corporate development officer at Dream Sports. The automatic precision sprayers that MITRA made helped farmers reduce their usage of pesticide by half. And now it's effectively the sprayer division of Mahindra, Kahn says. 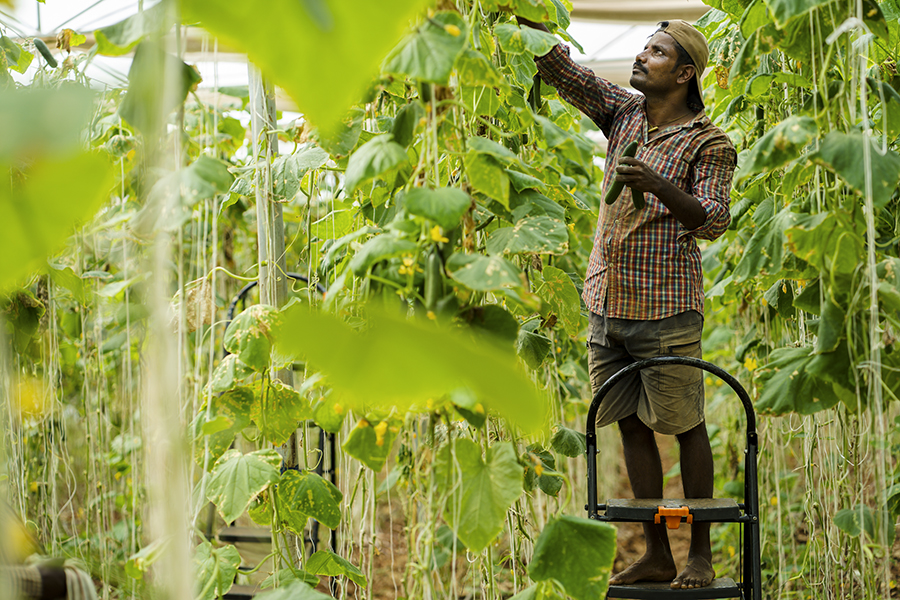 One of the problems that Omnivore set out to tackle is to try and radically increase the profitability of farmers
Kahn backed an IoT company called Eruvaka focused on the aquaculture sector. “I always say I was the first VC to ever do a deal in Vijayawada,” he says, because Eruvaka is headquartered there. And the company, founded by Sreeram Raavi, a semiconductor design engineer, has become really global and sizeable, and 90 percent of its sales are outside India. And Eruvaka went on to raise more funds after Omnivore’s first investment, and became profitable as well.
“It’s kind of the dream of make in India, right? So you’ve got a company that’s employing people in coastal Andhra where the products are actually 90 percent being exported to Latin America and Southeast Asia for use in aquaculture farms,” Kahn says. Eruvaka builds sophisticated sound-based sensors to help monitor shrimp ponds.

Direct to farmer
The first fund from which Omnivore invested from 2012 to 2016 was largely deployed along three themes. One was, innovative hardware for farmers. Another was food processing and a third theme was business-to-business digitalisation, because in those days, direct-to-farmer digitalisation was simply not possible.
Typically, the startup had to go to a corporate agri business or a cooperative and they would give access to the farmers on their networks. That has changed over the last few years. Starting in 2018-19, “if you look at the deals that we’ve done, a lot of it is now direct to farmer,” he says.
While rural mobile internet penetration in India still has some ways to go, there are many more farmers today with smartphones, more 4G connections, especially with Reliance Jio Infocomm expanding around the country, and reaching farmers directly is more of an option today. As a result, investors like Kahn are seeing many more platforms and marketplaces with embedded fintech and the ability to build much more full-stack models, meaning bringing internet-led services spanning the supply chain—from inputs to finance to market access.
And the inputs aren’t just about seeds or fertilisers. Stellapps and Eruvaka, for example, have built technologies to collect and analyse data and give useful information back to the farmers, from alerts to forecasts.

Omnivore’s second fund coincided with this change. Kahn and Shah raised their second fund in 2018-19, and one of the best known examples of this full-stack approach is DeHaat. Omnivore invested in the startup in 2019 and Sequoia Capital came in a year later. Today the venture counts Prosus and RTP as investors as well.
Shashank Kumar, co-founder and CEO at DeHaat had been in touch with Kahn from 2012, while the VC firm invested in the startup in March 2019 as co-lead of the venture’s first institutional funding round of $4 million. Omnivore has invested in each of DeHaat’s follow-on funding rounds as well.
“They have a great understanding of the agri scene in India, but also the ground-level reality,” says Kumar.
Last year, Omnivore invested in Animall, which is a platform to help dairy farmers trade cattle. Founded by women who grew up in rural north India and met at IIT Delhi. “They are trying to transform the world that they knew as children,” Kahn says. Co-founder and CEO Neetu Yadav’s father is a small dairy farmer in Rajasthan. Yadav was previously a product manager at Pratilipi in Bengaluru.
Another company Omnivore has backed recently is Reshamandi, which is working in India’s silk sector. Omnivore did the deal together with Strive Ventures. India has 6-7 million silk farmers in a $7 billion industry. And it has no digitalisation and no tech-driven supply chain integration of any kind, Kahn says. Reshamandi is probably the first venture to try and change that—from the inputs to farmers all the way to the silk retailers.
Breaking the shackles
The problems that Omnivore set out to tackle persist, and there are four ways in which the VC firm is working on them. One is to try to radically increase the profitability of farmers. With very small and fragmented land holdings, effectively bringing agricultural extension in is difficult. And attempting to increase yield in itself won’t be enough if there’s no clear market for that extra yield, Kahn says.
“If you double the tomato yield in India, the streets of rural Bharat will be paved in tomato sauce,” because there isn’t an existing export market, for example, that can take up the extra produce. And domestic consumption isn’t going to double either.
So part of the solution is in improving the terms of trade, in reducing costs, input costs, and costs of finance. And the portfolio companies at Omnivore are working on all of them.
Another major task is building resilience against the huge variability from year to year. This is one of the things “that makes being a farmer so frickin awful” in India, Kahn says. Even affluent farmers such as, for example, those with “hyper-irrigated lands growing fantastically profitable crops like bananas,” face this problem, he says. 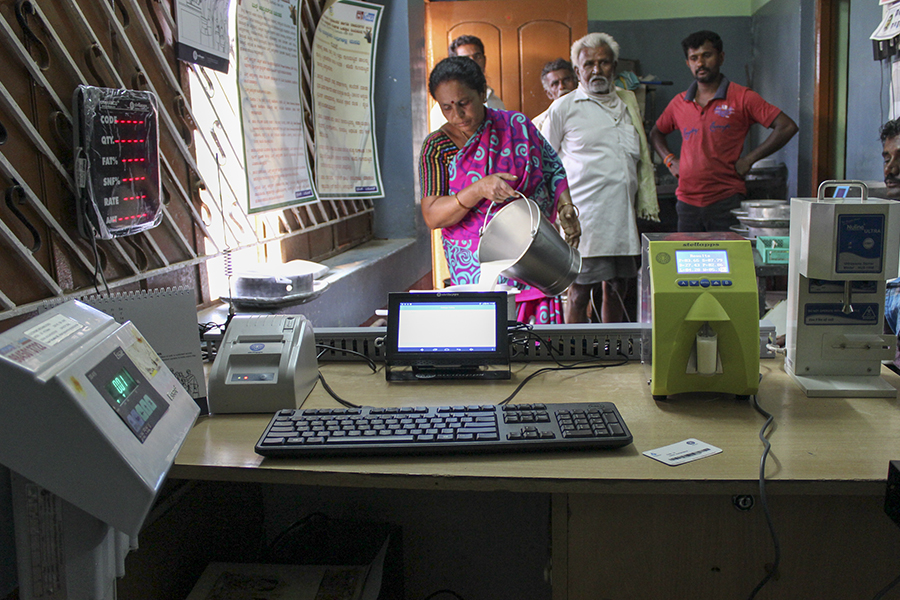 Tweets by @forbesindia
There is an opportunity in every crisis: Ajinkya Rahane
Netflix's Lupin is back for season 2. Can it recreate the magic?