How, at 55, the founder of Digit Insurance built a unicorn in three years 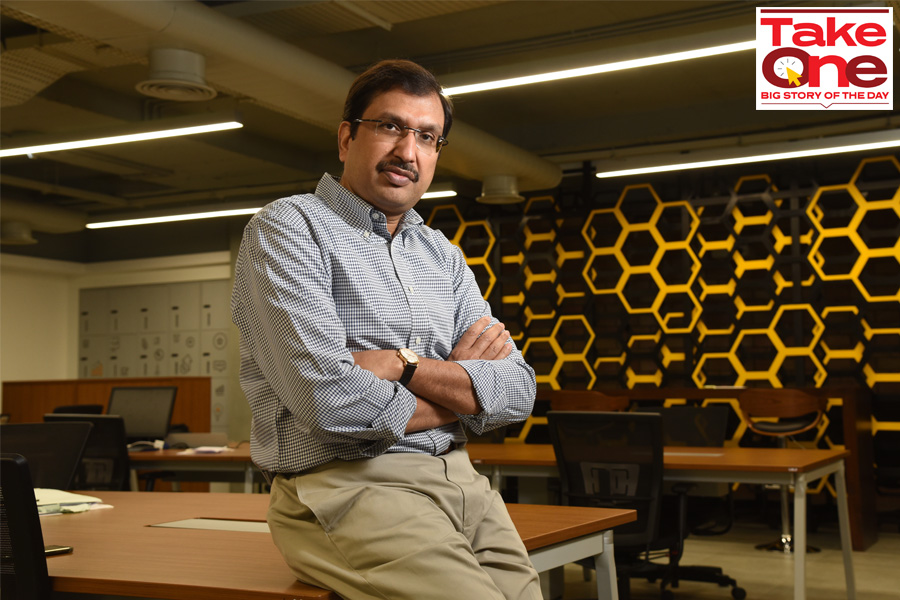 Paris, December 2015 Kamesh Goyal was in deep turmoil for close to two months. Holidaying with his family in the French capital did little to distract the then 50-year-old from brooding about his next move. The insurance veteran, with over 32 years in the industry, was in a fix. His dilemma was understandable. “I had spent 16 wonderful years with Allianz,” recalls Goyal, who joined the German insurer in November 1999 as general manager at the Allianz India Liaison office. From heading Bajaj Allianz General Insurance in India to moving to Singapore as regional chief executive officer of Allianz Asia Pacific to heading the group’s planning and controlling for the German insurer at Munich, Goyal had an impressive professional stint so far. Still there was something missing.  Bothering Goyal was a fierce tug of war between the heart and the mind. Some of his friends in India and colleagues in Germany had been encouraging him to start his own venture; after all, he had the right kind of experience, connect and inclination. But it was a predictable line of thought that was deterring him: What if things didn’t work out? Goyal was 50, had all the material comforts life could offer, and was set to soar even higher in his professional career. Throwing it all away and starting from scratch seemed foolhardy and not worthy of the risk.  Goyal, however, was also keen to take the plunge. The reason was simple: this could be the last opportunity to try something new. Age was not on his side. But then, failure at this stage was also unthinkable. His mother could sense the agony. “What are you afraid of? What’s stopping you? All these years, you confidently invested in stocks and put money in other companies. “Ab samay aa gaya hai. Apne upar paisa lagao (The time has come. Now put money on yourself). Don’t worry about the consequences or any insecurities,” she told him.    The pep-talk from his mother worked like magic. In August 2016, after eight months as the head of asset management and US life insurance at Allianz, Goyal put in his papers. He incorporated general insurance startup Digit Insurance, applied for a license in December, and sold his first policy in October 2017. In a little over three years, Digit went on to become the first unicorn—a company with a valuation of $1 billion and above—of 2021. A fresh round of funding—reportedly Rs 135 crore—led by existing private equity investors such as A91 Partners, Faering Capital and TVS Capital valued the company at $1.9 billion in January. 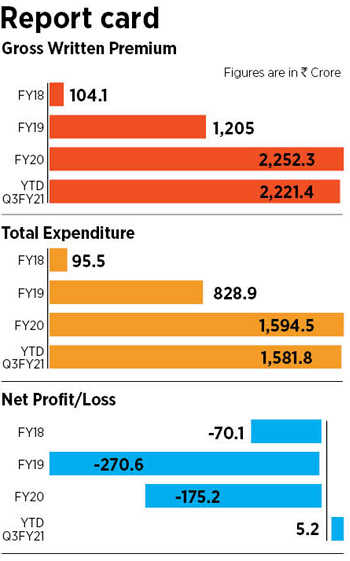 Though Digit’s phenomenal growth is gratifying for the first-time entrepreneur, Goyal is not euphoric. “Being a unicorn is a validation of our thought process and where we are,” he says in a candid interview with Forbes India. “I don’t think it matters beyond that.” What matters more to him is the value he is creating for consumer and investors. “When investors start finding value in your business model, it creates an opportunity to keep building the company for the long term,” he says, struggling to curb his child-like excitement. Being the first unicorn of this year, he lets on, is thrilling. “We are getting a lot of free publicity, which was otherwise very difficult,” he laughs.  In Goyal’s case, the unicorn tag comes along with performance, not something too many startups can boast. Gross written premium surged from Rs 104.1 crore in FY18 to Rs 2,252.3 crore in two years. The performance during a pandemic year has been equally strong: Rs 2,221.4 crore till the third quarter of FY21. Losses were trimmed from Rs 270.6 crore in FY19 to Rs 175.2 crore in FY20. In fact, in the third quarter of FY21, Digit reported a tidy profit of Rs 5.2 crore.  Another big comforting factor for Digit and Goyal is the unflinching backing from Canadian billionaire Prem Watsa, who has reportedly pumped in $140 million (roughly Rs 1,080 crore) in Digit so far. “Incredibly, in FY21, Digit will be profitable on an operating basis. It’s highly unusual for a startup to be profitable in three years,” says Watsa, founder of Fairfax Holding. Kamesh, he adds, grew the business by 40 percent last year, and should continue that growth in the years to come. “Digit is on its way to becoming a truly outstanding company.”  Goyal has built Digit into a fully digital company with over 2,000 people across 60 locations in India. Watsa’s association with him goes back a decade. “I was impressed with his track record at Bajaj Allianz (where he was the founding managing director) and his intimate knowledge of the details of the company,” Watsa recalls. Praising Goyal for an aggressive ramp-up in the business, the Canadian billionaire underlines four aspects about the founder that got him hooked. “He is honest, ethical, has a very creative mind, and is an exceptionally hard worker.” Goyal went on to head both the life and property and casualty businesses of Allianz in India. “Allianz thought so highly of him that they took him to Munich,” he adds. In February 2012, Goyal went to Munich as Allianz’s head of group planning and controlling.  THE JOURNEY FROM COLLEGE  Goyal’s tryst with insurance began in March 1988. “I got into it more by an accident than by design,” he recalls. In his early twenties, Goyal didn’t have any particular ambition in life. A college senior at St Stephen’s in New Delhi was applying for an insurance job, and he prodded Goyal to follow suit. A quick application was followed by an equally fast interview call, for which Goyal was not prepared. “I didn’t know anything about insurance,” he recalls. A crash course in insurance was also of little help. “I couldn’t even remember the names or the number of companies that were operational,” he recounts. For the young lad, brought up in the industrial township of Khetri in Rajasthan, insurance was as alien as water in the desert.

Goyal’s early dreams were shaped largely by his environment. “When you grow up in an industrial town, all you want to become is one of them,” he recalls. Even a general manager’s designation, he says, used to be quite fascinating during that period. “We grew up in such an environment,” he says. Simplicity and a sedate pace of life were at the core. Goyal wanted to join BITS (Birla Institute of Technology & Science) Pilani, but he missed the cut-off by one mark, and landed up at St Stephen’s College. There was no regret though. “After two months at the college, I realised that this is the best thing that could have happened to me,” he recalls. Three years of college life resulted in exceptional times and some great friends. Life and destiny, he underlines, have played their role in his life. His stint with Allianz was something he never planned for. After nearly a decade at New India Assurance, Goyal joined KPMG in 1997, and Allianz was of the clients. “Working with them for over 15 years was a fascinating journey,” he says.  Equally fascinating has been the way Digit has scaled up over the last three years. Goyal gives the credit to his team. For startups, having a good team is critical. “This was our biggest differentiator,” he says, explaining how his team helped in fanning the business. Though Goyal was new to the startup game, having a bunch of people who were at the top of their game in various departments was a big blessing.  Digit grew fast, learnt fast, but didn’t make many mistakes. “There was one notable one though,” Goyal recalls. After extensive research, based on the fact that India is the largest market for jewellery and gold, Goyal and team reached a conclusion. “We thought that we could come up with jewellery insurance as a product,” he says. The move bombed. “I didn’t worry about the mistakes as the big things clicked,” he says, alluding to the uptick that the company got during the first two years because of motor and fire insurance. In the third year, the pandemic hit, and Digit rolled out a Covid-19 product that turned out to be a blockbuster.  A dream run in his professional career, and a fairy tale story so far as an entrepreneur, Goyal doesn’t believe in exaggerating either hardships or success. “I am grateful I didn’t have to struggle too much,” he says. He doesn’t see much difference between the life of an employer and that of an employee. “I was fortunate to work in a set up where I could always work as an owner in terms of empowerment,” he contends. What, though, has definitely changed is the risk-taking appetite. “It’s a bit more now because you don’t need to justify to too many people what you are doing,” he smiles. What has also made a difference as an employer is the power to empower his employees. “Now I can give ESOPs to a large number of people in the company,” he says. Anybody with one year at Digit is eligible for ESOPs. “More empowerment to the team will help the company as well. That’s a big differentiator as an employer,” he adds.  For Goyal, though, the biggest differentiator as a person continues to be one thing: living life without regrets. “One should not look back at one’s career and then answer ‘what if’,” he says. “The answer lies in taking a leap of faith.”

Tweets by @forbesindia
Umlaut: adds something on top
The value of dissent