The B2B trucking platform built muscle, shed fat and focussed on SMEs to scale rapidly. It leveraged technology and offered solutions that addressed the typical pain points for both truckers and shippers 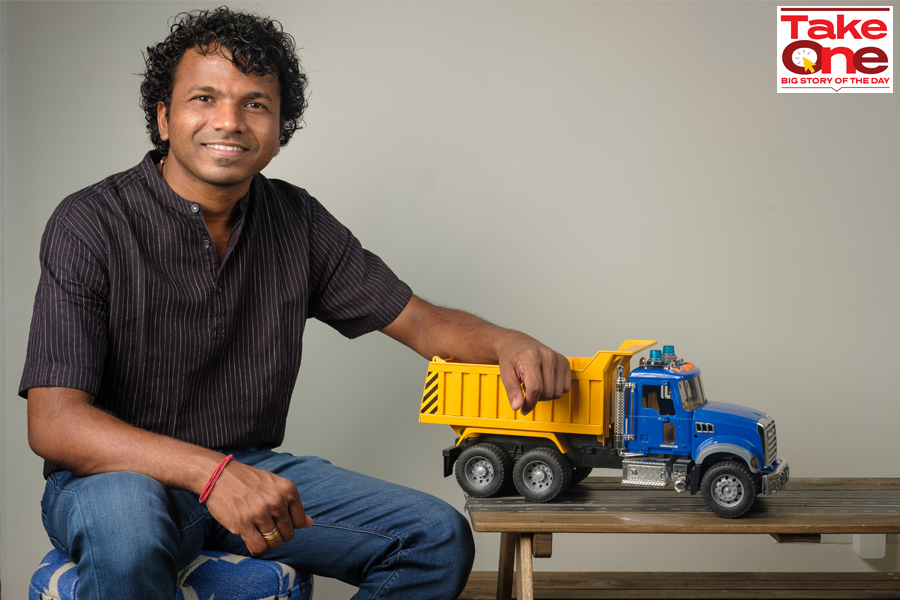 Six years ago, it was a question of muscle versus fat for Rajesh Yabaji. The answer looked like a no-brainer for the IIT-Kharagpur graduate who headed the supply chain division of ITC’s leaf tobacco business before co-founding BlackBuck in April 2015 with Chanakya Hridaya and Ramasubramaniam B. The medium-framed man with a muscular built opted for brawn. “Our gross margin used to be 15 percent,” he recalls, alluding to the performance of his fledgling B2B online trucking platform during the first few months. The flattering business metrics made sense. Reason: Too much operational inefficiency plagued the transportation industry. “We used to make a lot of money on every transaction,” recounts a beaming CEO, who built the business looking to solve the problem of corporate big boys such as Coca-Cola, HUL and PepsiCo. Within a week of starting, BlackBuck raised $5 million in seed round in April.

In four months, the startup started flexing its muscle. “In August, we are an Ebitda (earnings before interest, tax, depreciation and amortisation) breakeven company. Can you imagine!” says Yabaji. The report card looked impressive: Revenue was Rs 3 crore and the cost hovered around Rs 30 to 33 lakh. “We didn’t know we were Ebitda breakeven until an analyst from an investment firm pointed out,” he adds. The promising performance managed to grab more investor interest; BlackBuck got over half a dozen term sheets, and valuation climbed at a crazy pace.   Yabaji, though, could sense an impending muscle pull. Revenue was still small, revenue multiples talked about by analysts made little sense to the first-time entrepreneur and everybody was betting on the team and the promise of a rewarding future. The startup raised another $25 million around September-October in the same year. The trucking venture started lifting heavy weight. 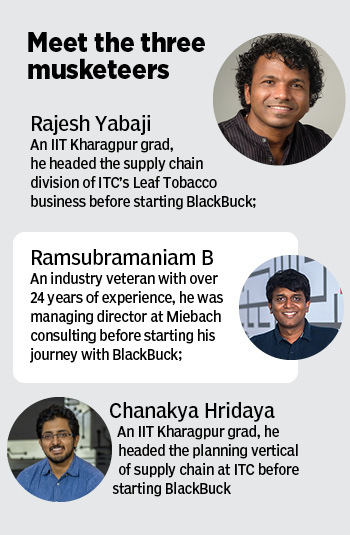 What followed the investment frenzy and unrealistic euphoria was a natural outcome: Fat. Analysts of all kinds started pumping all sort of ‘gyan’ to the new founders. The biggest trucking player in the ecosystem, pointed out one of the high-profile investment gurus, had a 60 percent negative Ebitda. The second in the pecking order, pointed put another intellectual, had 40 percent negative contribution margin. The top guys, Yabaji was made to understand, were focusing on scale. “Hum to bahut galat kar rahe thein (I thought we were not doing the right thing),” he recalls. The entrepreneur, subsequently, opted for fat. It was aggressive scaling at the cost of everything.   Then came the crash in 2016. Hit by a global meltdown and China’s stock market crash, liquidity got sucked out of the Indian startup ecosystem. Yabaji’s ‘fat’—which he started accumulating after the first few funding rounds—suddenly turned obscene to investors. “What kind of business have you built?” asked one, alluding to the negative contribution margin. Yabaji was baffled. How can revenue be in the negative was a question he failed to understand. “And is this not the kind of business—aggressive scaling—you guys admired?” he asked. A deafening silence greeted Yabaji. By the end of July—just a year into BlackBuck’s operations—the startup had a paltry Rs 1 crore in the bank. “When we raised Series B last year, we had Rs 185 crore in the bank,” recalls Yabaji, who was staring at a bleak future. 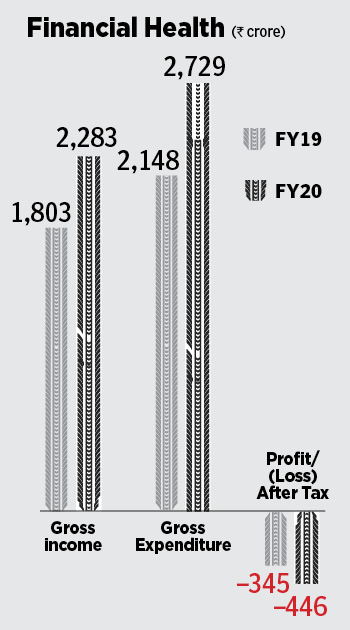 Cut to April 2020. Uncertainty was again knocking at the doors. A month into the national lockdown due to Covid, BlackBuck was dealt a fatal blow. April revenue shrunk to zero, most of the truckers went out of business, and SMEs didn’t have money. To make matters worse, only big corporates in the business of essential commodities could keep their cash registers ringing. For those involved in the business of coal, minerals, chemicals, paints and textiles, all movement came to a grinding halt. Till two years back, BlackBuck was getting 90 percent of its revenue from big corporates while the remaining came from SMEs. There was a problem on the supply side as well. For the core logistics sector, Yabaji explains, 95 percent of the vehicles are financed. “Most of them skipped three to four EMIs,” he rues. “Nobody had enough load, and it was a spiralling downwards story.”    For Yabaji, it was again a question of muscle versus fat. This time, though, it was of a different kind. The startup stopped experimenting. All projects which were not yielding money were shuttered. Secondly, BlackBuck stopped taking the take rate—fee charged on a transaction—from SMEs. Thirdly, it slowed down its lending business to truckers, which it was carrying on through its lending partners. The gambit paid off. Once things started to normalise last year, SMEs flocked to the trucking platform. What also helped in the growth was the electronic tolling across the country, which grew BlackBuck’s platform by over 15 times in the run-up to the Covid lockdown. During the second wave this year, it doubled again. “We helped SMEs to get their trucks, and we started doubling on loads every month,” he claims. Now 90 percent of BlackBuck’s business comes from SMEs. 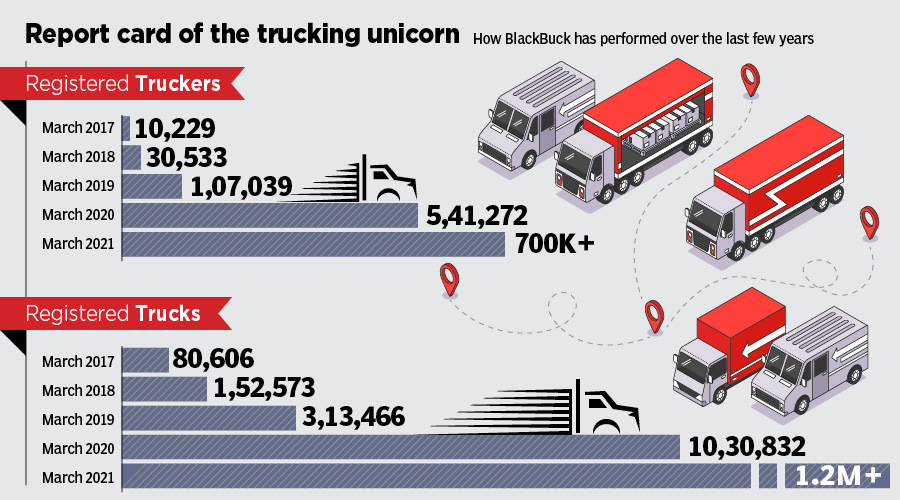 Investors were quick to reward the company with a renewed approach and sharp focus. Last week, BlackBuck became a unicorn when it raised its Series E round of $67 million led by Tribe Capital, IFC Emerging Asia Fund and VEF. Existing investors Wellington Management, Sands Capital, and International Finance Corporation also participated in the round which valued the startup at over $1 billion.   Saadia Khairi, fund head at IFC Emerging Asia Fund, explains what helped BlackBuck drive into the coveted unicorn club. In the midst of the pandemic, she underlines, Blackbuck scaled its online freight marketplace and fleet management services rapidly. Its contribution to increased transparency and efficiency in the large, fragmented and predominantly unorganised long-haul freight market in India offers the potential for significant developmental impact, she says. “We have been impressed with how Blackbuck has continued to leverage technology to offer solutions that address typical pain points for both the truckers and shippers,” she adds.

For Arjun Sethi, co-founder and partner at Tribe Capital, what has clicked for the trucking unicorn is its ability to transform the industry. India's supply chain, he stresses, and the logistics industry is moving from paper and pencil to digital. BlackBuck’s ability to measure output and productivity growth has streamlined logistical challenges for the industry over a short period of time. “Its continued high-velocity growth promises to bring even greater transformation to the Indian trucking ecosystem,” he adds.

Yabaji, for his part, reckons that the latest fundraise is less about turning unicorn and more about the validation of the backers in the startup’s renewed focus, path and business. “They have invested in what we managed to do over the last year or so. It’s not about our past,” he stresses. “I am building muscle-driven scale rather than a fat-driven venture,” he says, adding that the target for his startup is to be with every trucker across the country.  The muscular journey, though, has taught Yabaji one crucial lesson: There is nothing called chance, or a fat chance. The biggest learning as an entrepreneur, he explains, has been to understand the difference between spending and investment. Yabaji has started asking questions such as: ‘Is what is being invested really going to solve a problem?’ or ‘Will it build a moat or convert into a strength, or is it just a calorie?’ “Every activity must lead to building of muscle,” he says, explaining what muscle stands for. “Call it customer value or moat or unit economics,” he says.   The second big learning for the entrepreneur is to understand that there is a fine line between experimenting and taking things for granted. In fact, the lines mostly get blurred. While in a new market, one has the right to experiment and iterate, one can’t be casual. “In the early years, the lines got blurred and we didn’t understand these things properly,” he confesses. The third learning is the realisation that nothing comes easy. “If anything is happening without breaking a sweat, then there is some problem,” he says. Another crucial lesson is to stay focussed. “Don’t get carried away by all the ‘gyan’ on aggressive scaling,” he says. “Stay calm, focussed, and play point by point,” says table tennis player who won multiple tournaments during his college and school days by just doing one thing. “I played for every point, and never thought about winning,” he says. Unfortunately, Yabaji forgot the priceless lesson during his entrepreneurial journey. “It’s always playing for that one point at a time. Winning will follow,” he says. The choice for entrepreneurs, he lets on, is simple: Do you want to become a fat guy or a muscular guy? BlackBuck, he reckons, is building muscles, and is a work in progress.