How we survived: Third global crisis in 20 years, yet Bharat Matrimony is going strong

From the dotcom bust in 2000, to the 2008 financial meltdown and now Covid-19, the online matchmaking portal has innovated and come out on top every single time

'How We Survived' is a series of stories on businesses—big and small—that innovated or pivoted during the coronavirus crisis to survive. For all the stories in this series, click here October 24, 2008. ‘Black Friday’ is indelibly etched in the memory of Murugavel Janakiraman. In one of the biggest falls in the history of the stock market, the Sensex tanked by a staggering 11 percent. The financial crisis—triggered in the US by the bankruptcy filing of fourth largest investment bank Lehman Brothers on September 15—quickly snowballed into a debilitating pandemic hitting every country across the globe. A few months into the doldrums, while the US economy slipped into recession, developing countries were coming to terms with a painful slowdown.

Back home in India, things were fast turning chaotic for businesses of all kinds and entrepreneurs of all sizes. For Muruga—that’s how Janakiraman is addressed by his friends and colleagues—it was a matter of survival. His eight-year old online matchmaking venture—Matrimony.com—was under severe strain. “We were fast running out of capital,” he recalls. “It was a body blow.” What made matters worse for Muruga was running a slew of other businesses, apart from matchmaking. “We had a job portal, online property vertical, and an automobile portal. We ventured into various verticals,” he says. When the going got really tough, Muruga’s survival instinct got better of his killer instinct. “In 2009, an entrepreneur in me got transformed into a CEO,” he says. Employees were handed pick slips, multiple ventures were shut down, losses were pared and capital was conserved. The matchmaking business became his focus. “That became the core,” he recalls. Going back to the roots made sense for a venture which was born during a crisis year, 2000, when the dotcom bust happened. Matrimony.comwas a crisis baby. It survived then, and so also eight years later. “What doesn’t kill you makes you stronger,” he says. Cut to March 2020. Covid—the mother of all crises—hits India. The country goes under a lockdown; most of the businesses press the panic button; and growth forecast looks exceedingly gloomy. For Matrimony.com, which went public in 2017 and in FY20 had posted revenue and net profit of Rs 371.8 crore and Rs 29.5 crore, respectively, the business of marriage, too, entered into a state of uncertainty. ‘Who would scout for partners during such distressing times’ was the question, and there were no clear answers.

Muruga, though, stayed composed. Surviving two global crises, economic pandemics of sorts, came handy. To repeat a Covid lingo, his T-cells activated his immunity system and the 50-year-old knew how to withstand the most virulent attack of a global slowdown. Muruga, interestingly, rates the Covid-induced crisis as less severe: 2008-09 was the most challenging for him. “I have realised crisis is too big an opportunity to be missed,” he says. One can do both: Survive as well as thrive. First, the survival hack was quickly put in place. A two-pronged strategy was formulated. Offensive part of the plan was to aggressively look for areas to cut cost. This time, there were no layoffs or salary cuts. The defensive part was to optimise the operational cost and headcount. In some of the business verticals, like call centre and payment collections department, the team size was rationalised and the excess manpower was shifted to another department. “I went back to zero budgeting,” Muruga recounts. Every department and function were looked into with fresh perspective and stringent return on investment (RoI) lens. The Matrimony team also took to innovative approaches: A slew of new features, such as live video calling and home weddings (see box), was rolled out for users; BharatMatrimony, the flagship brand of Matrimony.com, tied up with ratings agency Crisil for wedding services platform MatrimonyBazaar. The idea was to provide an extra layer of trust and credibility to the consumers in terms of reliable wedding service providers. One-size-fits-all pricing mechanism was also done away with, bringing in separate pricing on the basis of a host of factors, including the socio-economic background of the users. The gambit paid off. Operational revenue increased from Rs 86.8 crore in the first quarter of FY21 (April-June) to Rs 93.3 crore in Q2 (July-September). Growth has returned, and profitability is intact. What has also come back is an aggressive marketing spend, and more visibility on TV as Matrimony stepped on the gas to air MS Dhoni-featured commercials. Muruga justifies an uptick in spend. “It is important to keep investing,” he says. Explaining factors that dictate the marketing blitz, Muruga says there are markets where Matrimony is spending more than what is required. Reason: Increase in competitive intensity. Second, there were markets where the brand was spending less, leading them to step up. “There is an opportunity for us to grow,” he says. In 2016, he points out, just 6 percent of the matchmaking business was online. Now the numbers stand at 8-10 percent. Covid, he underlines, has only accelerated digital adoption. “Still, the headroom for growth is massive,” he adds. Over the next three years, he predicts, the number will jump to 30 percent. Muruga’s conviction about the business model, reckon early online pioneers, has done a world of good for the entrepreneur. “He was part of the early internet entrepreneurs in India along with Sanjeev Bikhchandani (Naukri.com), Deep Kalra (MakeMyTrip), Ajit Balakrishnan (Rediff.com), and Avnish Bajaj (Baazee.com),” says K Vaitheeswaran, who along with his five friends started Fabmart—India’s first ecommerce company—in 1999. During the early 2000s, the online industry was quite small. “All of us used to meet regularly at industry events, sharing our learnings, and trials and tribulations,” recalls the serial entrepreneur and CEO of Again Drinks. Muruga, he underlines, always stood out in terms of clarity of thought.

What makes the founder of Matrimony remarkable is the business segment he operates in. “Online matrimony is a very tough business in India,” says Vaitheeswaran. Most families who go in for arranged marriages look for alliances through family and friends. Even when they approach marriage brokers, they seek recommendations before signing up. At the turn of the century, internet users in India were under 3 million, and it would have been hard to expect this base to go online for alliances, he adds. There’s also a lot of sentiments attached to weddings in India and it would have been hard to convince people to opt for internet. Another massive challenge in online matrimony is that, unlike online shopping, there was no chance of a repeat business. “Muruga, though, was confident about the growth,” he says. Muruga’s confidence, it turns out, not only came from doing a host of right things, but also from trying a bunch of wrong things. “There are learnings from every mistake,” he says. One such memorable one came five years ago when he flirted with the dating business. Tinder was the inspiration. Muruga bought Matchify in 2015, and invested a couple of million dollars in the women-focussed dating app. In three years, the relationship turned toxic. Matchify was shut down before Matrimony listed on bourses in 2017. “Somehow we didn’t see the flip side of the venture,” he rues. When it comes to marriage, he says, the intention of the users are clear: They want to get married. “There is a serious audience, there is a certain age group and they pay for subscription,” he says. For dating, though, the intent is casual. For some of the dating players in India, there are only 10 percent women on the platform, he claims. “None has achieved a million dollars in revenue,” he contends. Contrast it with the top three players in the matrimony business—BharatMatrimony, Jeevansaathi and Shaadi—who have together over Rs 1,000 crore in revenue. Getting into multiple verticals with limited capital was another big mistake. “Venturing into too many things till 2009 took a toll on the business,” he recalls. One of the failed ventures was a return gift vertical. Matrimony rolled out physical as well as online stores. The idea was to provide a platform for people looking for gifts for weddings or those planning to buy gifts in bulk. Another flop idea was setting up a separate vertical for the bottom of the pyramid. Yet another dud was getting into wedding photography, which was a highly unorganised segment. “There were times when the video guys didn’t reach on time. The marriage was over,” he says.

Along with these, what also got over was Muruga’s appetite to try too many things. “Focus was the biggest takeaway,” he says. Every crisis, he underlines, had a silver lining. In 2000, when Matrimony was born during the dotcom-bust year, many companies went out of business and the ones who existed were open to exploring business relationships with upstarts. “We tied up with big companies like Rediff and Sify at a fraction of the cost,” he says. “Crisis closes one door, but opens another. One just needs to spot it.” 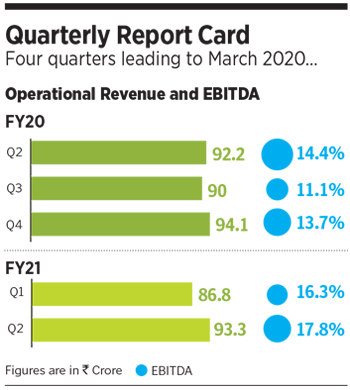 What Muruga spotted in 2020, which happens to be 20th year of Matrimony.com, is staying true to the basics of the business. In 20 years, he points out, Matrimony.com has built a sustainable business. “We have always been a long-term player. A marathon runner,” he says. A pandemic, or any crisis, tests the fundamentals of the business and an individual. The business, he lets on, was never built on extravagance. ‘We never had money to burn, or extra capital to splurge on,” he says. A frugal life turned out to be the biggest blessing. “When your company has a strong foundation, you will never be naked,” he says, alluding to the quote by legendary investor Warren Buffet: Only when the tide goes out do you discover who's been swimming naked. Muruga, for his part, has mastered the art of survival, tiding over the crisis, and making the most of it. Whether marriage or the business of matchmaking, the basics remain the same: Survive the rough years, and thrive when you hit the purple patch.