The top companies' latest numbers also spotlight greater participation by women, overall, with the top IT companies seeing women make up close to 40 percent of their workforce 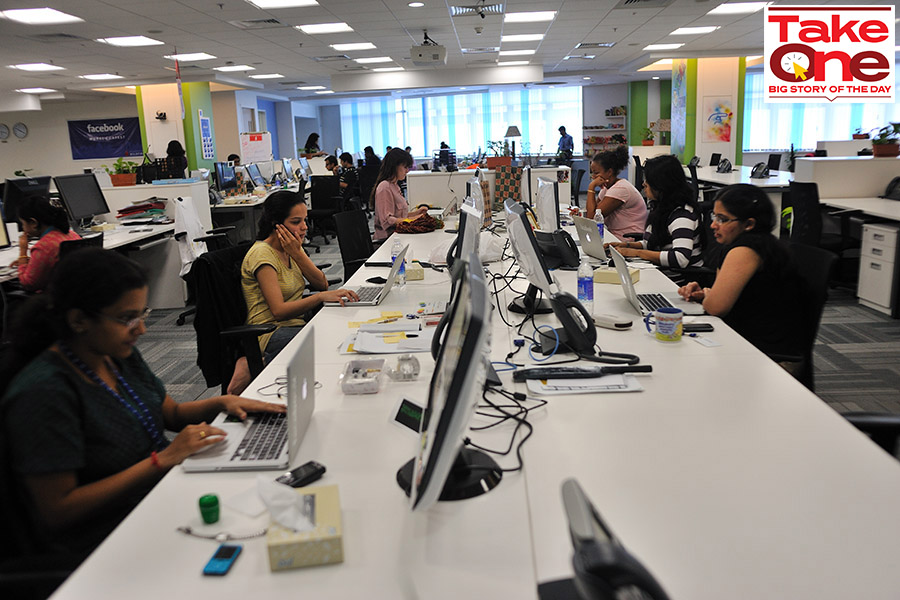 Tata Consultancy Services (TCS), Infosys and Wipro, all reported strong growth for their fiscal third-quarter, reflecting the sustained faster adoption of cloud computing and digital technologies in their biggest markets. Shares were up in early Mumbai trading for TCS and Infosys.

The numbers—released on Wednesday—are also beginning to reflect the battle lines among the rivals not only for contracts, but also talent. Infosys has clearly come out ahead in revenue growth while TCS has reported a much more stable staff churn. Infosys aggressively kicked up its revenue forecast for the full fiscal, making it the third increase in its guidance in the nine months through December 2021.

TCS hit the $25 billion revenue milestone for the calendar year 2021, and reported growth of 18 percent in America, its biggest market, for the three months ended December 31. Overall, TCS returned its best fiscal third quarter performance in five years, with revenue growth of 15.4 percent over the same period last year in constant currency terms.

“We’ve had an exceptional quarter,” TCS CEO and MD Rajesh Gopinathan said in an online conference with the media on January 12. “We continue to see strong traction across the board.” 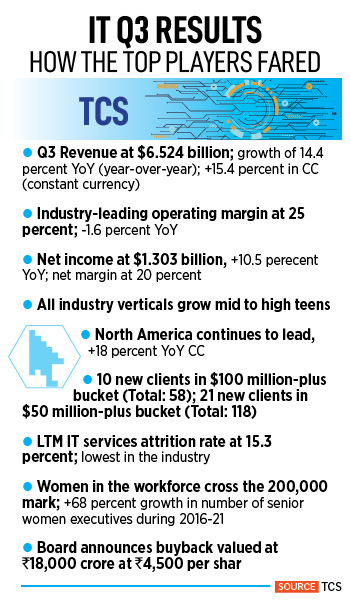 A confluence of many factors—all accelerated by the Covid pandemic—is making the outlook really promising for India’s top IT services companies. Fence-sitters are finally taking the plunge into the clouds, pushing the as-a-service model to new heights; AI (artificial intelligence) is beginning to deliver, and 5G is rolling out around the world, bringing private enterprise networks and the promise of IoT (Internet of Things) closer to reality. In all of this, software holds the key.

Infosys—on track to cross $16 billion in revenue this year—continues to lead in terms of growth, with a 21.5 percent increase in Q3, and higher sequential quarterly growth throughout the pandemic in comparison with its larger Mumbai rival.

Wipro, India’s fourth biggest IT company by revenue, is returning to sustained growth, after its fifth consecutive strong quarterly performance under CEO and MD Thierry Delaporte, from his base in Paris, France, and chairman Rishad Premji, who hired him. However, the lower end of Wipro’s 2 to 4 percent guidance for sequential revenue growth for the current quarter, may have disappointed investors—perhaps expecting a stronger turnaround—as reflected in the lower share price on the morning of January 13.

"Our strong performance and market share gains are a testament to the enormous confidence our clients have in us to help them in their digital transformation,” Salil Parekh, CEO and MD of Infosys, said in a press release on January 12. Digitalisation-related services accounted for 58.5 percent of the company’s Q3 revenues, an increase of 42.6 percent, Infosys said.

“We expect the healthy technology spend to continue with large enterprises progressing on their digital transformations,” Parekh said.

Deal pipelines at all the three companies continue to grow strongly as well. In the December-ended quarter, TCS reported signing $7.6 billion in total contract value—what the contracts are worth over their life—versus $6.8 billion from a year ago. In the first nine months of the current fiscal, TCS has signed $23.3 billion worth of orders. 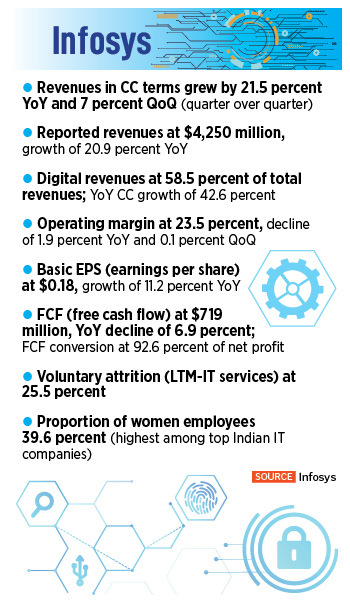 At Infosys, which makes public only its large order wins—typically orders worth $50 million or more—contracts signed during Q3 were worth $2.53 billion. The number of customers contributing $100 million in annual revenue also rose. Wipro said it has added seven such customers in the last 12 months, whereas TCS added 10 such customers in Q3 while Infosys added two.

ISG, a leading global advisor to the IT services industry, which tracks all IT contracts worth $5 million or more, reported continued strong deal bookings for the industry in the December-ended quarter. Global-managed services contracts rose by 13.2 percent year-on-year to $8.6 billion. That made the December-ended quarter the third straight quarter to see contract value of $8 billion or more, Aniket Pande, a research analyst at Mumbai brokerage Prabhudas Lilladher, pointed out in a note to clients.

“Even with the headwinds of the ongoing pandemic, inflation, supply chain disruptions and the ‘Great Resignation’ (in the US), ISG still forecasts healthy growth rates for both managed services and XaaS in 2022,” Steve Hall, president of ISG, said in a press release. XaaS refers to any kind of tech as a service.

“Many large enterprises are in the early stages of their digital and cloud journeys, and are looking to invest further in transformation. As the role of technology morphs from cost savings to revenue generation, technology adoption will only increase over time. That market-driver will more than offset the current market challenges,” Hall said.

Worldwide, managed services—as the term indicates, IT managed by vendors—hit a new annual record of $33 billion in the calendar year 2021, up by 16 percent versus the prior year, on a record 2,176 contracts, up by 15 percent, according to ISG. It was the first time contracting activity surpassed 2,000 deals in a year.

Within managed services, IT outsourcing grew by 12.5 percent to $25.1 billion, a new record, on record volume of 1,560 contracts, up by 9 percent. Application development and maintenance services led the way, up by 40 percent to a record $14.3 billion, even as infrastructure services declined by 11 percent to $10.8 billion.

Business process outsourcing turned in its second-best year ever, with contract value of $7.8 billion, up by 31 percent, on a record 616 contracts, up by 32 percent against 2020, ISG data showed. Within BPO, engineering and R&D services shot up by 170 percent over the prior year to $1.8 billion.

At Prabhudas Lilladher, Pande pointed out another trend: Smaller deals continue to dominate the market with the number of managed services deals exceeding 500 for the fourth consecutive quarter, based on ISG data. “Enterprises are breaking down large transformation projects into smaller units for faster deal execution, in turn creating opportunities for mid-sized IT service providers,” he said.

Whether it’s a behemoth like TCS or an up-and-coming provider like LTI, that growth is happening on the back of the irreversible move to the cloud computing model. Even though some two-thirds of all IT is yet to move to the cloud, the shift is strong, and what started out as a pay-as-you-go pricing-based model for compute and storage has now become a sophisticated way of tapping data analytics, collaboration and mass personalisation for the end consumer. 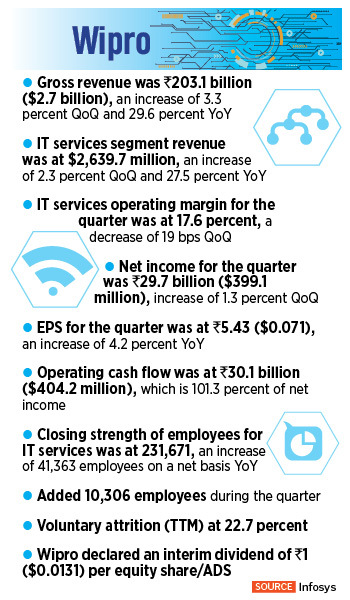 “We expect calendar year 2022 to be another robust year of growth for IT services led by accelerated transformation and cloud migration and pent-up demand,” analysts Kawaljeet Saluja and Satishkumar S at Mumbai’s Kotak Securities said in a note to clients.

Workloads in public cloud will increase from the current 30 to 35 percent (15 to 20 percent at the start of calendar year 2021). While focus on experience layer will continue, analysts expect organisations to increase spending on data and core modernisation initiatives to get the full benefit of cloud investments.

IT budgets of companies will grow by a healthy 6 to 7 percent, according to Kotak’s estimates, which expects Indian IT exports to grow at about 11 percent in fiscal 2023, implying strong net addition of $19 billion, the analysts said.

The cloud migration journey of enterprises consists of three phases: Infrastructure migration or lift-shift from on-premises to the internet; development of cloud-native apps; and seamless collaboration across ecosystems to yield new products/services, the Kotak analysts point out.

Businesses have more access than ever to both enterprise and consumer data due to higher digitalisation and want to put it to use. Companies are investing significantly in application modernisation and cloud-native development, and the brokerage expects a further increase in spending.

Enterprises will particularly invest in data modernisation, advanced analytics, artificial intelligence and machine techniques to generate real-time business insights that can both help reduce costs and generate new revenue streams. “We expect monetisation of enterprise and consumer data to be a key area of focus for organisations in CY22,” the Kotak analysts say.

And with the urgent need to tackle climate change, IT services around ESG, or environment, sustainability and governance, is an area of opportunity, the analysts say.

For example, Infosys accelerated Daimler’s transition to sustainable mobility by transferring its high performance computing (HPC) workloads—used to design vehicles and automated driving technologies—to one of Europe’s greenest data centres, Lefdal Mine Datacenter, in Norway, the Bengaluru IT company said.

Infosys provided ‘Green Data Center as a Service’ as part of Infosys Cobalt, its cloud service, to facilitate Daimler’s journey to net zero, the company said.

With all of this, finding, and retaining, the right talent has become even more of an imperative. And the need to retain more women in the workforce is hitting home as attrition, meaning employee churn, is going up. At TCS, the number of women in its workforce crossed 200,000, which is 36 percent of the company’s total workforce of 556,986 staff at the end of the December quarter. At Infosys, the proportion of women at the end of Q3 was 39.6 percent.

The company added 28,238 employees on a net basis during the quarter. Its policy of hiring local talent across the world has resulted in a globally distributed workforce comprising 156 nationalities, TCS said. It also seems to have found ways to keep its attrition the lowest among the top IT companies.

TCS’s ‘voluntary attrition’—meaning people quitting to pursue other opportunities or higher studies and so on—was 15.3 percent compared with 25 percent at Infosys and 22.7 percent at Wipro. The company has focussed on “internally groomed cadre of specialists” and organic talent development, TCS said in a press release.

That said, the hiring of fresh graduates is on fire. In addition to the 43,000 freshers the company hired in the first six months of the current fiscal, TCS brought on 34,000 fresh graduates in Q3, “which is higher than our full year fresher hiring numbers in prior years”, chief human resources officer Milind Lakkad said.

“By continuing to invest in our people, giving preference to internal candidates for the most exciting open positions, providing global deployment opportunities, fast-tracking career paths linked to learning, and promotions to over 110,000 employees, we have been able to retain our best talent and overcome supply side challenges,” Lakkad said.

“At Infosys, despite the cost escalations driven primarily by supply side challenges, we delivered another quarter of healthy margins, with improved cost optimisation, continued operating leverage and a stable pricing environment,” CFO Nilanjan Roy said. Infosys saw a net increase of 12,450 employees in Q3. “We continue to prioritise investments in talent acquisition and development, and have further increased our global graduate hiring programme to over 55,000 for fiscal 2022 to support our growth ambitions.”

Tweets by @forbesindia
Science and humanity skills will become essential for best use of digital tech: TCS COO
Photo Of The Day: The Yellow Season