The comeback is stronger than the setback: Byju's founder to employees

Under public scrutiny for losses, layoffs and a toxic work culture, the edtech unicorn says last fiscal the strongest, FY21 losses cut down to half 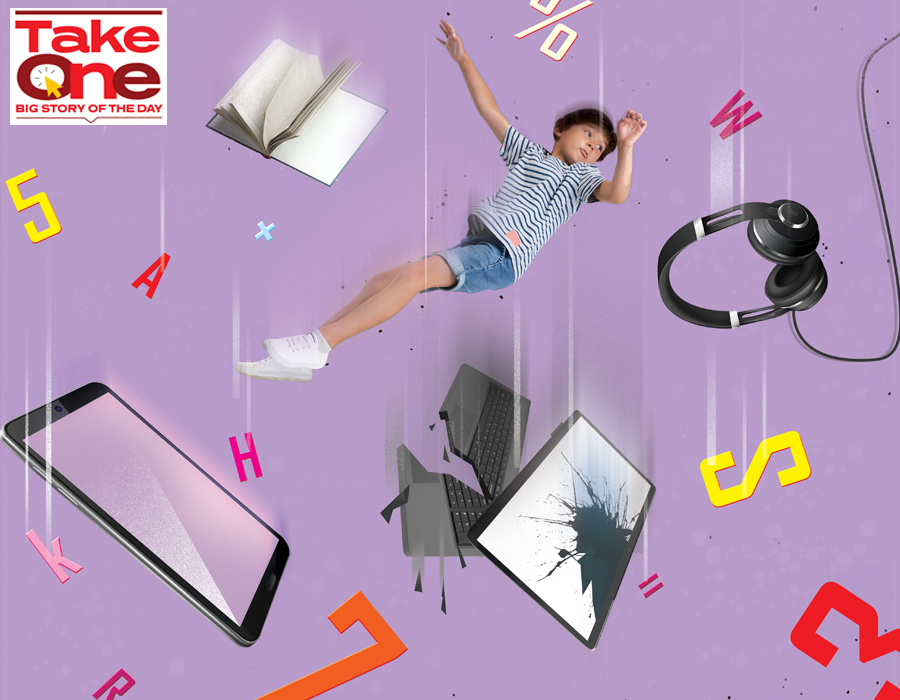 Byju’s has been under great public scrutiny from quite some time. From the allegations of miss-selling courses to parents to having a toxic sales culture and also laying off employees, it’s in a turmoil Illustration: Chaitanya Dinesh Surpur

In an email that he sent to 50,000 employees on Monday, Byju Raveendran borrowed a quote from the movie Rocky Balboa and said the year hasn’t been “all sunshine and rainbows” for the company. After an over-a-year wait, on September 14, Byju’s revealed the company’s FY21 (2020-21) financials: The world’s most-valued edtech company Think & Learn Pvt Ltd, which runs the education platform, has now become the world’s most expensive edtech company for investors after a decline in its FY21 revenue that led to an increase in its revenue multiple.

The company incurred a total loss of Rs 4,589 crore for FY21, a 20x jump from Rs 232 crore in FY20. Their total income on a consolidated basis declined by 3.3 percent to Rs 2,428.3 crore in FY21 from Rs 2,511.7 crore in the previous year. Byju’s, which has seen a degrowth in FY21, claims that much of the losses are due to changes in the way it recognises multi-year revenue such as that earned from its streaming services for recorded classes. The edtech giant readjusted its unaudited revenues for FY21 following two key changes sought by its official audit firm Deloitte Haskins & Sells.

For instance, the learner pays Rs 50,000 for a two-year course to prepare for an entrance exam. Earlier, the company would recognise the entire Rs 50,000 as revenue at the time it was paid. Now it is spread over two years, taking the period of contract into account. Because of this, Raveendran said, around 40 percent of the revenue collected in FY21 got deferred, which would have otherwise seen revenue growth in the region of 60-65 percent.

The company claims to have received a clean and unqualified audit report for FY21. Around 40 percent of their pre-audit revenue for FY21 has been ‘deferred’ to subsequent years but the incurred costs have all been subsumed in the same year. “It means this entire deferred revenue will be directly contributing to our profits in FY22 and FY23. The change in our accounting methodology and the high cost of multiple acquisitions reflected in the ₹4,500 crore loss figure for FY21.”

Byju’s has been under great public scrutiny from quite some time. From the allegations of miss-selling courses to parents to having a toxic sales culture and also laying off employees, it’s in a turmoil. But the founder and CEO is quite optimistic about the company’s growth, as he writes to his employees, “The last financial year (FY22, ending March 2022) was our best year so far and 2022-23 is set to be an even stronger year. The comeback, as they say, is always stronger than the setback. Going forward in FY23 and beyond, we will combine growth with efficiency to ensure sustainability. We have already started shifting our focus towards profitable growth. The overall idea is to allocate resources effectively in order to maximise impact.”

Also read:  Full text of Byju Raveendran's letter to staff: Not all sunshine and rainbows, but we have grown in every dimension

Raveendran claims his company is on its way to $2 billion revenue. In the email, he highlights financial and operational numbers: “Our FY22 revenue is nearly Rs 10,000 crore, or $1.3 billion. This means we are now a billion-dollar plus revenue company. April-June 2022 was our best ever quarter by far. In fact, we have clocked more than Rs 1,000 crore in sales in each of the last five months! This means $2 billion revenue is within our sights now.” Only time will tell if this rapid growth will translate into profitability or not.

According to Prashant Narang, co-founder of Agility Ventures, an angel network and a venture fund, due to severe price wars between edtech companies, the increase in revenue does not directly translate to increase in profits. Increased marketing and acquisition costs, along with the post-pandemic requirement of teaching both online and offline, have led to most of these companies incurring multifold losses. “Acquisition of various edtech companies, which were cash-burning, is also one of the reasons why Byju’s has incurred losses. And now, they need to reverse the reputational damage that has happened because of late tax filings, negative feedback from parents for aggressive selling and others.”

In a LinkedIn post, co-founder of the edtech unicorn Divya Gokulnath referred to the company’s financial results as the second blockbuster of the year, the first being the Ranbir Kapoor-Alia Bhatt-starrer Brahmastra. She wrote that in the 18 months that followed FY21, the Bengaluru-based company has grown four times, and the reported “widening losses” in FY21 have been cut down to half in FY22.

As much as the higher losses are alarming, the biggest reason for worry would also be the marginal growth in revenue. The combined statement includes financial details of WhiteHat Jr, Specadel Technologies, Tangible Play Inc (Osmo), Span Thoughtworks Private Limited (Vidyartha), Byju’s Inc, and Byju’s Pte Ltd. Out of these, among its subsidiaries, WhiteHat Jr contributed the most to the losses. Raveendran called WhiteHat Jr the under-performer within Byju’s portfolio of products and claimed it is likely to involve high cash burn due to the very nature of the segment. With a total loss of Rs 1,118.25 crore in FY21, WhiteHat Jr contributed 26.73 percent to the total loss, becoming the second largest contributor to the overall loss after the parent company.

There has also been a serious decline in Byju’s revenue from India. India contributed Rs 1,600 crore to the revenue in FY20, but this fell by nearly 40 percent to Rs 987 crore.

Over the years, Byju’s has been aggressive on acquiring companies and raising funds. The company has raised over $5 billion in a mix of equity and debt till date. Founded in 2011, Byju’s has also consistently commanded high valuations. The edtech company acquired unicorn status in 2018, and saw its valuation skyrocket to over $22 billion in less than four years. It has also expanded fast by acquiring a number of companies. According to Tracxn, the company has either invested or fully acquired 22 firms and has spent over $3 billion on acquisitions. Out of 22, nine were acquired in 2021. The company is also waiting to receive pending funds from Sumeru Ventures and Oxshott.

Byju’s has Rs 1,983.49 crore ($249.6 million) pending in cash payments to clear the acquisition of Aakash, a company that it roped in for nearly $1 billion in April 2021 to enter the offline and the test prep space. Blackstone, the largest stakeholder in Aakash with a 37.5 percent holding, is reportedly due $180 million.

Forbes India spoke to current and ex-employees of Byju’s, and found out that while some of them are confident about the company bouncing back, others complained about the delay in incentives and added work hours. Especially the Business Development Associates (BDAs) are quite unhappy. Just recently, they formed a group on WhatsApp to get together and fight for their rights. Their complaints are long work hours, sometimes beyond 12 hours a day, hard targets and deadlines and mistreatment by managers if they aren’t met, putting them on performance improvement plan (PIP) and eventually firing. One of the ex-employees said: “I left the company because the toxic work culture started affecting my personal life. There was a situation where I was working even when my mother was in the ICU.”

From being the title sponsor of the Indian cricket team and putting their name on their jerseys, to having Shah Rukh Khan as an official brand ambassador to being the primary sponsor of the FIFA World Cup 2022, the company has spent a hefty amount on marketing. According to news reports, the combined marketing expenses of Unacademy, Vedantu, and upGrad stood at Rs 793.5 crore in FY21. In contrast, Byju’s consolidated marketing expenses for FY21 were nearly three times more. “In the K12 segment, Byju’s revenue is nearly 20 times the next two competitors combined. This means that we are getting even larger in a market that is growing bigger every year,” wrote Byju’s to his employees.

Byju’s launched its hybrid learning offering centres this year through Byju’s Tuition Centres (BTCs). It’s a complete programme for students that blends offline and online learning experiences. The startup plans to expand its network of tuition centres to 500 locations by the end of the year, from the over 200 it currently has; it will also likely double the headcount of teachers to 20,000. “Byju’s learning app, Byju’s Tuition Center (BTC), Byju’s Live Classes and Aakash Byju’s are now working in sync to bring our hybrid model to life. Nearly 250 BTCs are already live,” said Byju’s in the letter.

Byju’s claimed that in FY22, it clocked Rs 10,000 crore in gross revenue, but Raveendran added that one of their subsidiaries, WhiteHat Jr, will continue to remain in losses. However, these are unaudited results and there’s no clarity on whether this would be the final revenue for FY22.

There are many uncertainties around the future of the company. However, Raveendran is confident that they will bounce back stronger. He said a strong 2022 in the face of adverse macroeconomic conditions makes him even more confident that Byju’s is built to last many generations. As the great philosopher Albert Camus said, “In the depth of winter, I finally learned that within me there lay an invincible summer.”

Tweets by @forbesindia
Russia's Finance Ministry official talks about a bill to allow businesses to use crypto internationally
Vitalik Buterin, the co-founder of Ethereum, defends DAOs against critics