Immigration experts say the long 'misused' and 'abused' visa, a favourite with Indians, has fallen out of favour with both Republican and Democrat administrations for decades. Even if Joe Biden defeats Donald Trump, it's unlikely to get easier 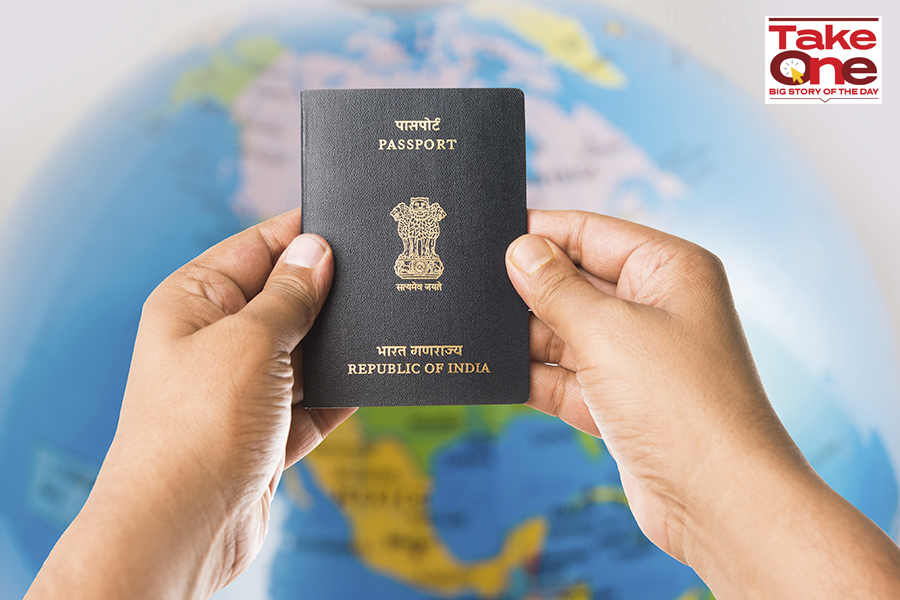 A heady blue-versus-red vote count is underway, punctuated by see-sawing percentage points and contrarian calls for states. As the world holds its breath before its most powerful person is elected, many Indians and Indian-Americans are on tenterhooks.

In October, the Donald Trump administration proposed yet another series of obstacles to the H-1B visa process, which is a popular way for Indians to immigrate to America. It hopes to do away with the computerised lottery system, a random selection process, to procure the visa, and replace it with a wage-based system in which applicants will be selected based on salary levels.

This is the latest in a series of attacks against the H-1B programme, including a suspension on the entry of foreign workers (and therefore, issuance of new immigrant visas) until the end of the year that Trump announced in June.

However, President Trump may not be the only obstacle in the road. Let’s break it down. What’s going on with the H-1B?
According to the new rules, the wage criteria for those coming to the US on an H-1B visa (widely used by technology companies to hire skilled Indian workers) have been significantly increased by the Department of Labor. Later in the month, the Department of Homeland Security made the announcement of doing away with the lottery, in a statement titled ‘DHS, Trump Administration Protect American Jobs from Unfair International Competition’.

“[This] would prioritize the selection of H-1B registrations (or petitions, if the registration process is suspended) based on corresponding wage levels in order to better protect the economic interests of US workers, while still allowing US employers to meet their personnel needs and remain globally competitive,” the statement said. “Modifying the H-1B cap selection process by replacing the random selection process with a wage-level-based selection process is a better way to allocate H-1Bs when demand exceeds supply.”

“If finalized as proposed, this new selection process would incentivize employers to offer higher wages or petition for positions requiring higher skills and higher-skilled workers instead of using the program to fill relatively lower-paid vacancies,” the statement added.

Many Indians worry this will put them at a disadvantage against American workers, since they have traditionally commanded lower wages. On October 30, 46 tech companies, including Twitter, Facebook, Google and Amazon, filed an amicus brief challenging the new rules. “The new DHS and DOL Rules will dramatically reduce US businesses’ ability to hire these skilled foreign workers—one senior DHS official estimated that they will render ineligible more than one-third of petitions for H-1B visas,” the brief states. “That will significantly reduce the economic benefits provided by the H-1B program, stunt the US economy’s recovery from the pandemic, and lead to greater reliance by US companies on operations outside of the United States—inflicting long-term damage to our Nation’s economic growth.” What are the issues with the H-1B?  “I don’t know why people keep talking about H-1B—it’s finished. It’s over,” says Mark Davies, global chairman at Davies & Associates, LLC, an immigration law firm based in New York. “US politicians, for years, Democrat or Republican, even under the Obama administration, do not want the H-1B. It’s going to continue to get more and more restricted.”  H-1B is the most popular category with Indians in the US. In 2020 alone, the US received nearly 275,000 unique registration requests for the 85,000 H-1B visas available for foreign technology professionals; of these, more than 67 percent are from India. In 2019, the US issued 188,123 H-1B visas for both new applicants and renewals. Of these, 131,549 were to Indians; and 28,483 to Chinese. According to the Department of State, while 13,678 H-1B visas were issued in May 2019, only 143 were issued in May 2020.

But right from the Clinton era, the H-1B visa has faced hurdles with the government, while also being ‘misused’ by companies. Originally, the programme was designed for highly-skilled workers. Now, a lot of students use it when they graduate. “If you look at the legislative intent, it’s designed for shortages where companies can’t really find workers locally, but that’s not what it’s being used as,” says Davies. “It’s reasonable to say that when a student comes to study in the US and graduates, they should be allowed to work here for a year or two,” he adds. “But that’s not what the H-1B is for. It’s being misused for this category, that’s the position of the American politicians.”

“The H-1B programme overall, we all have to agree, is not ideal. It’s fraught with misuse, abuse, and it isn’t fair for Indian engineers,” says Anil Advani, founder, Inventus Law. Advani is also a member of the USISPF Startup Connect programme, which focuses on cross border startups across the US and India. “The lottery system is arbitrary. A lot of changes need to be made.”

Moreover, the H-1B is a three-year temporary visa, and employees, often left at the mercy of employers, have no certainty of renewal. “Even if you survive the renewals, it takes 9-10 years to get that green card,” Advani adds. “All this time, you’re worried—if you’re going to have kids, you don’t know if you’ll be living in the US or not, don’t know whether or not to buy a house, develop roots, and so on. It was never an attractive way to come in.” How will the election results impact the visa category?
Joe Biden is the first presidential candidates to release an agenda proposal especially aimed at Indian Americans. In it, he says he will “first reform the temporary visa system for high-skill, specialty jobs to protect wages and workers, then expand the number of visas offered and eliminate the limits on employment-based green cards by country, which have kept so many Indian families in waiting for too long”. Biden does mention protecting wages, and experts say he may not be opposed to doing away with the lottery system in favour of the wage process either. Moreover, this point of reform may be low down in the priority order if Biden takes over as President, as the US is grappling with issues including the pandemic, unemployment and race protests. “With all that’s playing out, it doesn’t matter who wins the election, no one is going to make it easier to get the H-1B,” Davies says. “The speed at which H-1Bs become harder to obtain might be different depending on who wins the election. But I very much doubt that if we get a Democrat government, they’re going to ease it up—there’s no Congressional interest in doing that.”

Advani outlines the two scenarios: If Donald Trump wins the election, some radical changes could be expected. Some of it will be political and symbolic, in terms of protecting the country, jobs etc; others will be more detailed and involve rule-making, which may even be good for the overall system. It will favour higher-paying jobs, could remove some delays and bureaucracy and change the country quota or lottery system. “That’s the hope,” he says. “Whether the overall quota for India will be lowered, we don’t know, but that’s also a possibility. Ho wever, it’s likely that high-paid Indians will be more favoured.” Indian companies that take on body jobs and have abused the system in the back will probably get affected, because they’ll have to compete with US wages. “There might be some negative impact on the Indian economy because of that, but for individual Indians coming in for the right reasons to the right companies, it’ll actually make it easier,” he adds. “Even though fewer Indians might get there eventually, the ones who do will be better paid, balancing it out.”
If Joe Biden is to win, we could expect some review of the system, but not much, Advani says. “It’ll probably be status quo on the H-1s. I do expect they will pick up on the founder visa we began working on at the end of the Obama administration.” A lot depends on who controls the Senate and Congress, as Democrats and Republicans will fight over immigration reforms for a while. “The big difference in my mind is that with executive action, Biden could push the founders visa, by which Indian entrepreneurs can be incentivised to set up businesses in the US,” Advani says. “I don’t expect that to happen with a Trump win.” What are the other options for Indians?
A lot of companies have moved from the H-1B to the L-1 visa, which is an intra-company transfer—if a worker is employed in India, she or he can be transferred to the US to the same or a related company with the L-1. Another option is the EB-5, which is an ‘investor visa’ and requires the individual to make a $900,000 investment in a US venture; the EB-5 is a permanent visa, which doesn’t face renewal uncertainty like the others. Many graduates from US universities with wealthy parents are exploring the E-B5 option. “EB-5 basically costs an additional year of tuition for families that can afford it,” says Suresh Rajan, founder and executive chairman, LCR Capital Partners, a private investment and advisory services firm. “The changes to the H-1B regulations show the administration will work aggressively to curtail the programme, regardless of the election results. We also expect changes to the L-1 and F-1 OPT programmes, which is why permanent visas such as the EB-5 are important for people that can afford it.” “Just recently, we had an Indian prospect who, despite being a senior executive at an American multinational company that was in the process of applying for an L-1 transfer for him, is still considering the EB-5 visa,” adds Nirbhay Handa, head of global South Asia team, Henley & Partners. “The EB-5 saw tremendous interest from Indian families, but it does have a five- to eight-year waiting period for Indians due to the country-wise cap on visa allocations. So we have seen clients considering other avenues of getting to the US, via other countries.” For instance, a faster, cheaper route that’s gaining popularity among Indians is to get citizenship to Grenada, a Caribbean country. Indians are not eligible under the E2 Treaty Investor visa in the US, so by getting Grenada citizenship (which doesn’t require residency) that has an E2, the applicant and their family can enter the US for five years initially, with indefinite extensions. 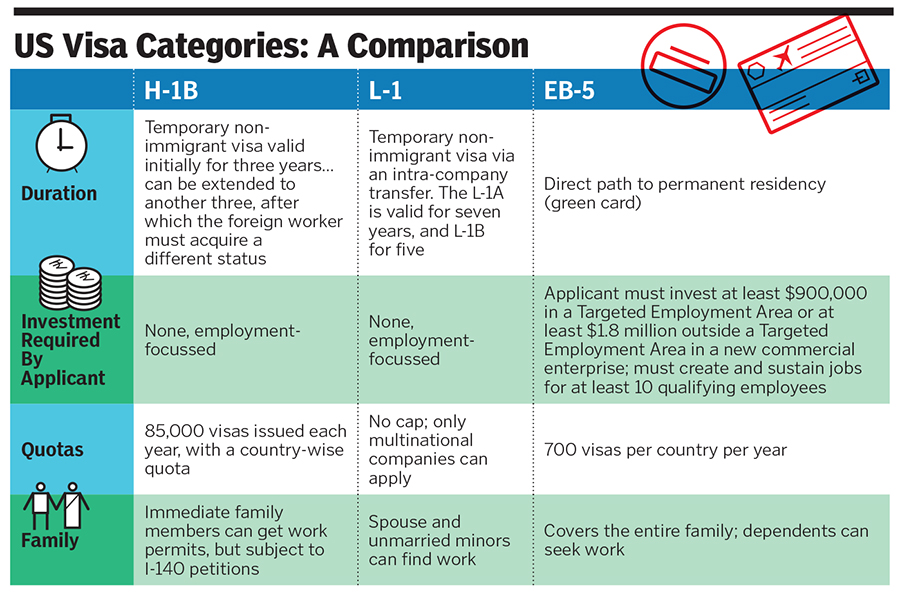 Is this the beginning of the end for H-1B queues? We’ll have to wait and watch for longer than we do for the election results this year.

Tweets by @forbes_india
Man who combined writing and business successfully - Shobhit Sinha
Trump vs Biden: What America looked like, waiting for the Presidential election results