The steam behind JetSynthesys's rapid growth

Set up in 2014, digital gaming and entertainment firm JetSynthesys has expanded at a furious pace, drawing investors like Adar Poonawalla and Kris Gopalakrishnan. Can founder Rajan Navani keep up the tempo? 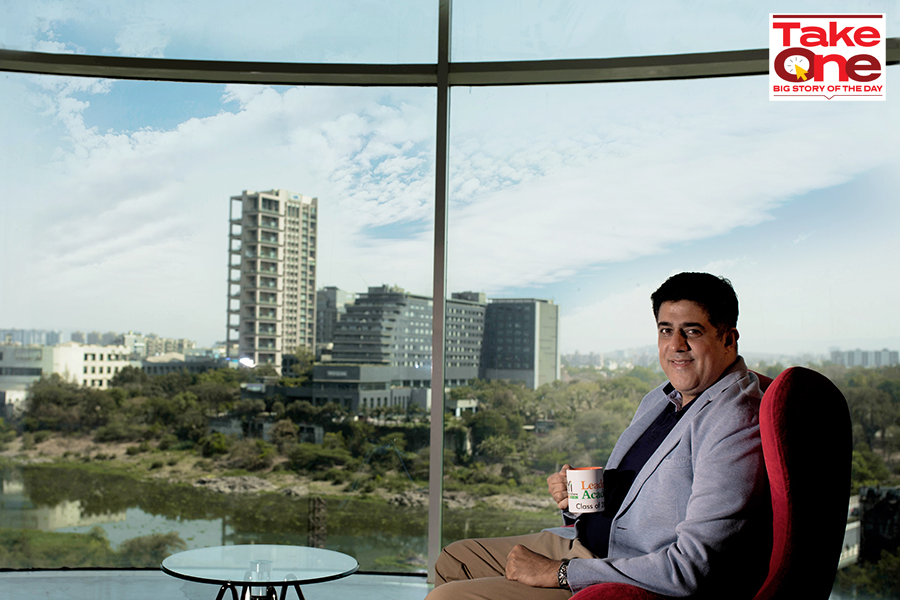 Rajan Navani, founder, JetSynthesys Rajan Navani first sniffed a business opportunity in the ’90s in the US. Armed with a master’s degree in electrical engineering from Purdue University—with a specialisation in digital satellite imaging and remote sensing—Navani worked at Goddard Space Flight Center at NASA in 1995. In remote sensing, he recalls, satellite imagery and pattern recognition were used to predict the quantum of corn that was likely to be produced in the state of Indiana, which was then extrapolated to forecast for the country. “If I can predict corn quantity with accuracy, then I can make money,” he thought. And he did. Navani called up his uncle, who would use the knowledge to make money from commodity pricing on the London Stock Exchange. “I gathered how technology can be leveraged from a business perspective,” recalls Navani, whose grandfather Kishinchand V Navani was the local Thai management partner of Indo Thai Synthetics Company, Aditya Birla Group’s first overseas venture in 1970. Establishing business roots in Thailand in the 1930s, over the next four decades the Navanis had set up extensive operations in textile, packaging and steel. In 1975, the family set up operations in India by building a packaging plant in Pune. Meanwhile, after spending over a decade in Thailand, Navani came to India in 2005 to take care of the family business. The third-generation entrepreneur, though, started looking for opportunities outside the family business after 2011—the early days for smartphones, data adoption and digitalisation. He roped in McKinsey to find out how to reach out to mobile users with digital offerings. “People were spending time on the phone, especially for calling,” he recalls. The choice for Navani was to get into telecom. But it was a crowded space. The next thing he looked at was email, but Google and Hotmail were already dominant. Chat was the next option. “We missed the bus here as well,” he recounts. WhatsApp was ruling the roost. Finally, he went back to the basics of what was driving mobile engagement in India̶̶—The ABCD formula of astrology, Bollywood, cricket and devotion—and started JetSynthesys in 2014. Fast forward to November 2020. JetSynthesys has morphed into a digital gaming and entertainment company, present in segments as diverse as fintech lending and job search. The idea, says Navani, is to reach out to the daily digital lives of mobile users, which calls for multiple digital platforms. “The only way to scale in the digital world is to work with the right partners,” he says. “You can't build everything yourself,” he concedes, explaining how he has gone about finding collaborators. 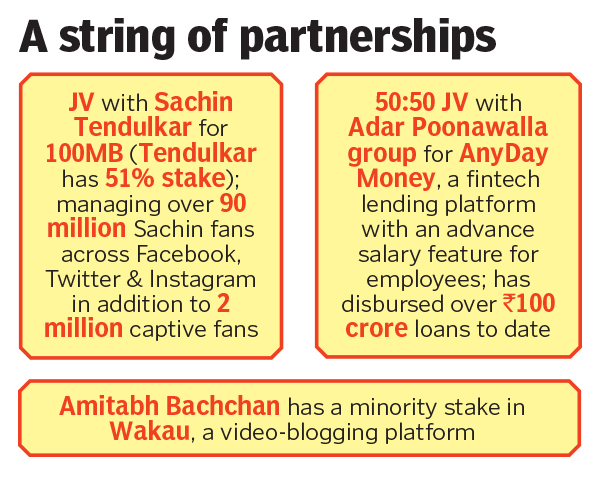 From a joint venture with Sachin Tendulkar for 100MB (the cricketer owns 51 percent); to an equal stakes JV with Adar Poonawalla in AnyDay Money, a lending platform with an advance salary feature for employees; to video-blogging platform Wakau where Bollywood actor Amitabh Bachchan has a minority stake; to partnering with WWE to create WWE-themed racing games, Navani has spread his business ventures quite far and wide. In terms of revenues, the gambit seems to be showing results. From Rs 7 crore in FY16 to Rs 137 crore in FY20, the top line has grown at a faster clip. In terms of bottom line, the company posted an EBIDTA (earnings before interest, taxes, depreciation, and amortization) of Rs 10.8 crore for March ended FY20. The venture raised Rs 300 crore in June this year from existing shareholders, including the family office of Serum Institute's Adar Poonawalla and Infosys co-founder Kris Gopalakrishnan. Other investors are the Navani family-owned Jetline Group, and family offices of the promoters of Thermax and Triveni Group.

The backers so far are satisfied with the pace of growth. “The way JetSynthesys has scaled over the years is commendable,” says Gopalakrishnan. The massive smartphone penetration, decreasing mobile data cost along with the wave of digitalisation and the emerging gaming industry in India have worked in favour of JetSynthesys, adds the former Infosys CEO, who has been non-executive chairman on the board of JetSynthesys since he stepped down from Infosys. JetSynthesys, he lets on, is on the right trajectory for rapid growth and progress. The company combines world-class talent, technology and content to impact the daily digital lives of people. “The lockdown has helped accelerate the process,” he says, adding that he shares a pleasant working relationship with Navani. Interestingly, the ‘sys’ of JetSynthesys is inspired from the ‘sys’ of Infosys. Poonawalla too is excited about his non-vaccine bet—a fintech lending joint venture with Navani. “A fast-growing new-age business combined with a legacy trusted promoter, and professional management team, make JetSynthesys a great choice,” he says, explaining the trigger to enter into an equal venture with Navani. The vision of the company, he adds, is to reach every household in India with content and products that are curated responsibly and resonate with the aspirational needs of its consumers. Putting in place a global footprint also works. Partnerships with some leading celebrities, IP holders and large gaming companies in the US, Europe and Japan give JetSynthesys an opportunity to build great products not only for India but also for the world. “We can leverage the strengths of India, including the talent, costs or size of the market to participate in other global gaming markets,” adds Poonawalla.

Back in the late ’90s too, Navani had wanted to leverage global partnership in Thailand. Exposed to technology during his stint at NASA, he had thought of venturing into a tech business. And spotted the laser disc market. He tied up with Japanese electronics player Pioneer. By 1997, Thailand emerged as the third-biggest market for laser discs after the US and Japan. Then came the Asian financial crisis in 1997, triggered by currency devaluation. The market crashed in Thailand. “It badly hit everything that was imported into Thailand,” recalls Navani, who decided to shut the business. “That was the first time I saw failure,” he says. Back in India, Navani again had a tryst with failure when he had to shut down the astrology vertical after 18 months of operations. Reason: Maharashtra’s Anti-Superstition Black Magic Act, 2013. Navani brainstormed with his legal team. The feedback was clear: Stay away from the grey zone. The focus then shifted to Bollywood, cricket and devotion. There were huge opportunities in games, which were created along with Bollywood celebs, as well as in vernacular music.  Over the next few years, Navani went on to add interest-based communities to his business platforms. Take, for instance, ThinkRight.me, an emotional fitness app which sends out daily affirmations as push notifications, daily videos and supports guided meditations. Then there is 100MB, a digital platform to engage cricket fans across the world through social aggregation, exclusive videos, live quizzes and merchandise. There seems to be a method in the apparent madness. He explains. “Mindfulness community (ThinkRight.me) is the best segment for lending,” he contends. Explaining his logic, he says that a person spending an hour on a mindfulness app is least likely to default. Similarly, lending Rs 50,000 to a user who has been spending around Rs 5,000 on buying merchandise and other items in the cricket games, makes sense. The strategy seems to be more of cross-selling, which comes after user stickiness. The challenges for the venture, though, still remain. And there are many. First, gaming is still the biggest source of revenue. Second, expanding into multiple and diverse sectors means a diffusion of focus. Third, a presence in multiple ventures should have propelled revenue growth. It hasn’t. Navani, for his part, explains why and how digital ventures are different from old-world businesses when it comes to topline, bottom line and valuation. The digital world, he underlines, is about building trust and engagement with users. “I can unlock profit by charging just a rupee or two to millions of users,” he says. But the digital world doesn’t work this way. The moment, he explains, the consumer feels that he is trying to take money from her, she will gravitate to other platforms. The magic lies in making her feel the need to pay rather than asking her to pay. “Has WhatsApp ever charged money?” he asks. “But it’s still a valuable business.” Old-world business, he points out, still doesn’t appreciate the value of a new-age business. Claiming that the company has a strong foundation in place for growth over the next two years, Navani still pitches for building value, and valuation. “We are on our way to becoming a digital unicorn,” he says.

Tweets by @forbesindia
India sees a decline in Covid-19 cases
Capital Ideas: Haigreve Khaitan on how a self reliant India will only boost foreign investments