Baubles to splurge on

A selection from the editors of ForbesLife India, ForbesLife and Network18 Publishing 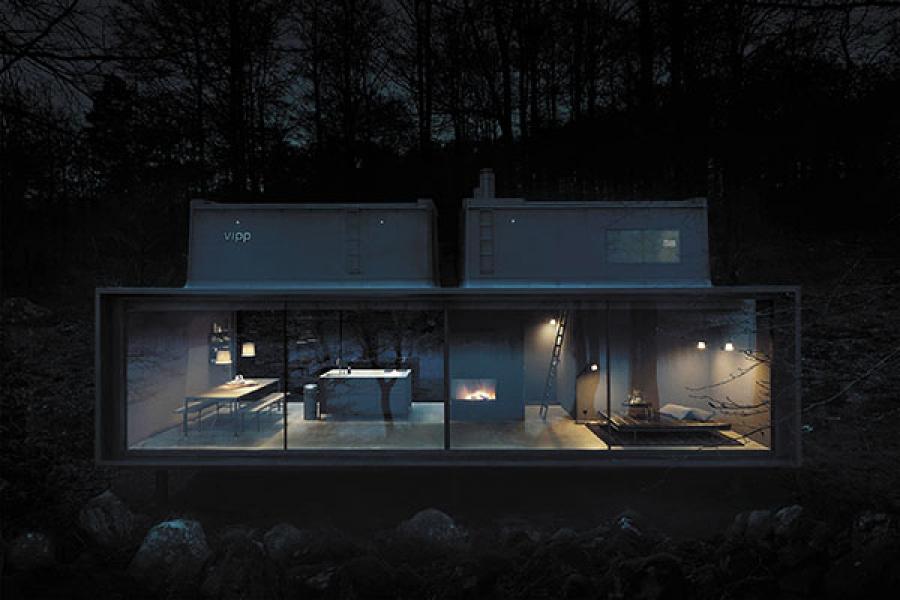 The Vipp Shelter
Price: €485,000 / $585,000
This pre-fabricated plug-and-play getaway facilitates an escape to nature. It is neither a house nor a mobile home, but a spacious, functional, and liveable industrial object. A steel grid structurally supports the two-level transparent shell, where only the bathroom and bed loft is shielded from the main living space. The interior is fitted with Vipp products, ranging from hooks to lamps to kitchen essentials. The only choice left to the customer is where to place it.
vipp.com 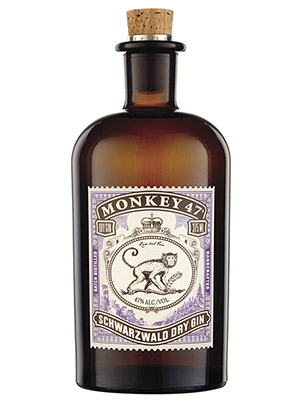 A Barrel of Monkey
The complicated origin story of this drink—a hyper-exotic, transcendently perfumed dry gin—reads like a tall tale, involving an RAF commander, a Berlin zoo monkey at the end of World War II and a secret recipe rediscovered after decades in a dusty attic. But it suits its subject. Monkey 47 is a decidedly not-for-beginners German distillate as distantly evolved from a tamped-down, blending-friendly, mass-market gin as can be feverishly imagined. A robust, 94-proof jolt of juniper intertwined with notes of forest floor, bitter berries, black pepper and citrus liqueur, this is an extraordinarily sophisticated tour de force, a choir of full-throated voices somehow merging into lithe melody. If Monkey 47’s squat brown bottle harkens back to gin’s apothecary beginnings, its pricing—at $45 per 375ml—is right up to the post millennium cocktail connoisseur moment.
—Richard Nalley 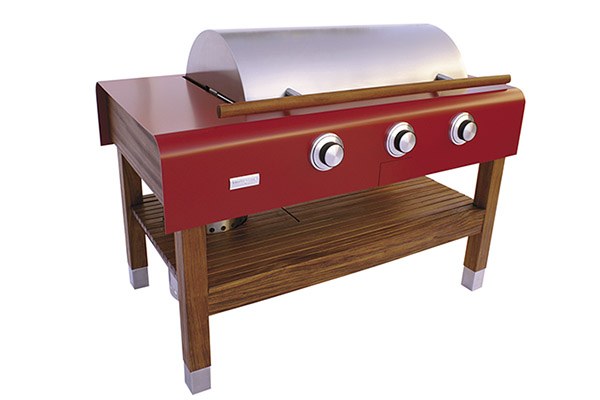 The New Flame
Leave it to designer David Rockwell—who has crafted restaurants around the world for Alain Ducasse, José Andrés and Nobu Matsuhisa—to understand the essence and elevate the experience of outdoor grilling. Of course, the apparatus in use has to cook, which Rockwell’s handsome, heavy-duty grill for Caliber Range does superlatively, and unfussily, well. But as the name Pro Social Grill implies, Rockwell has cottoned onto another core functionality: The grill as gathering place. With its wide, 60” x 30” stance, drink-resting shoulders and sleek, disappearing range hood—something like the dome of an haute Parisian restaurant’s pastry cart—this is a 360-degree hangout spot, a summer hearth for assembling the tribe at day’s end. The $10,000 Pro Social (caliberappliances.com) also, and not at all incidentally, provides its grill master with a singularly impressive stage for displaying his chops—lamb, beef or personal. 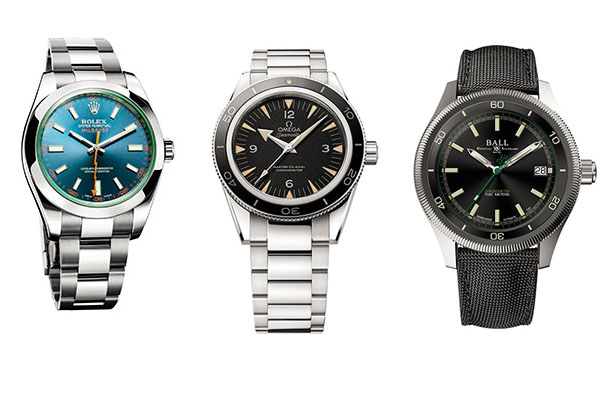 Metal Urges
Magnetism may be an admirable personality trait, but it can be hell on a mechanical watch. Granted, most of us aren’t working on a super-collider at CERN, but there are still magnets to be found in cellphones, computers and stereo speakers—not to mention airplanes—and their cumulative effect could be making you chronically late. Or early.

If that’s the case, it could be time for an anti-magnetic watch. Tissot introduced the world’s first anti-magnetic timepiece in 1929, and a few decades later, Rolex unveiled the Milgauss, which, as its name implies, was built to resist magnetic interference up to 1,000 gauss. (The typical refrigerator magnet, by comparison, is about 50 gauss.) For 2014, Rolex gave the Milgauss ($8,500) a stylish update—and the trademark green sapphire crystal only makes the Z blue dial appear more electric.

Around the same time Rolex debuted the first Milgauss, Omega unveiled its own anti-magnetic watch, the Seamaster 300. And in 2012, it took a great step forward with the world’s first anti-magnetic watch movement, the calibre 8508, which uses anti-ferrous materials. The new Seamaster 300 Co-Axial ($6,000) is resistant up to 15,000 gauss.

Earlier this year, Ball introduced the Engineer II Magneto S ($3,000), which uses a unique camera-style iris made of a metal alloy to shield the movement from about 80,000 amperes per metre, or about 1,000 gauss. (Picture the James Bond logo sealing off the case.)

Despite all of this protective technology, these watches still can’t guard one basic magnetic property. After all, they’re very attractive. 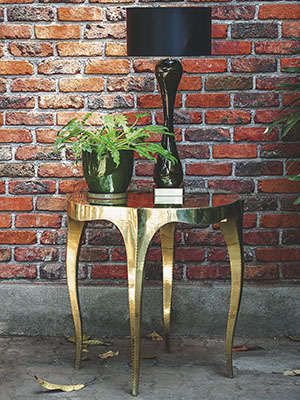 Bronze and Teak Table
Price: Table: Rs 1,95,500; lamp: Rs 82,700
This bronze splayed-leg side table is made of solid teakwood, topped off with a white bronze silver finish. Combine it with the Mirande table lamp, which has a Scandinavian appeal to it with its sleek and straight lines.
saritahanda.com 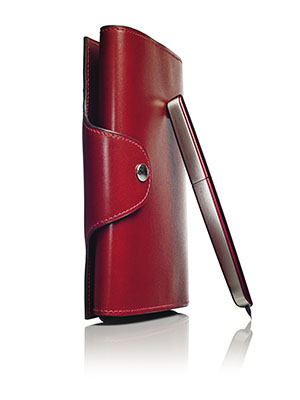 Hermès Nautilus
Price: Fountain pen: $1,650; ball point pen: $1,350
When Hermès set out to write a new chapter in its 177-year-old history, it was missing one essential element: A pen. Although the legendary French brand has sold stationery, notebooks and desk sets for years, it had never created a writing instrument. Until now. Produced in collaboration with Australian design god Marc Newson and Japan’s Pilot company, the Hermès Nautilus is a marvel of innovation in the same league as Jules Verne’s famed vessel. Constructed from aluminium and stainless steel, with a rhodium white-gold nib, the Nautilus is available as a fountain pen or a ballpoint that uses black or blue ink, with three additional exclusive colours: Red, ebony and the signature Hermès orange. As if the sleek, sculptural design weren’t seductive enough, the true genius of the Nautilus is that the pen is capless with a retractable nib. To release it from its shell it requires a simple twist of the upper half. It’s enough to remind you that writing is still a pleasure.
Hermes.com 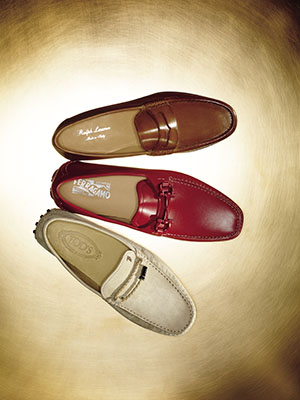 Sole Searching
A step below custom-made footwear are shoes that can be customised. While the fit remains true to a label’s design, you can have several elements made to order. At Tod’s, the Gommino Club shoe can be personalised in a variety of leathers and tassles. With Ferragamo’s MTO driving loafers, the colour of the leather or skin can be chosen along with the hardware on the bit. Ralph Lauren lets you create loafers, lace-ups or slippers, in several kinds of leathers, suedes and skins. The shoes, which are handcrafted in Italy, can be personally monogrammed. Because the best label of all is your own. 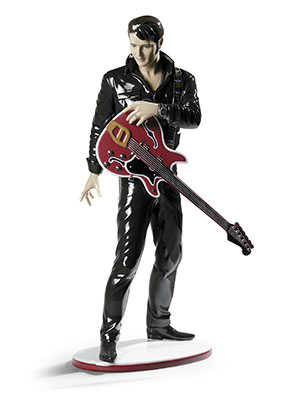 Lladró Elvis Presley
Price: Rs 74,700
This figurine of Elvis Presley, sculpted by Marco Antonio, in gloss black handmade porcelain is an ode to The King by Lladró. The piece is a vibrant interpretation of Presley based on his ‘Special Comeback Show’ in 1968. Particularly noteworthy is the authentic costume.
lladro.com 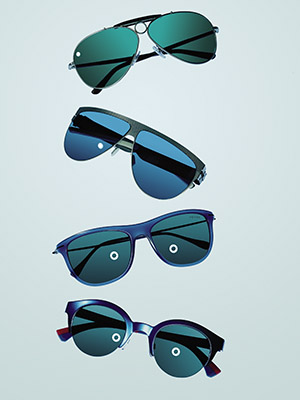 Self-Azured
Rose-coloured glasses may be the preferred eyewear of optimists, but optometrists will tell you that blue lenses are better at cutting the summer glare. (The red tint works better in low light, which means they really do make the world brighter.) In addition to being stylish, blue lenses—particularly when mirrored—enhance contrast, which is useful on a golf course. And some research indicates they may also be effective for dyslexia. Still, if optimism is what you’re after, consider this: With an azure tint, you’ll see nothing but blue skies.