Of mirrors and men

A quick side-profile check, a smoothing of the hair, head angled just right: Faced with a mirror, what man can resist? Male vanity is amusing and intriguing because it often seems to have little to do with ‘looks’. It is almost a reflex: Have mirror, will preen. It could be a shop window, an elevator wall, even cutlery—any reflective surface will do. 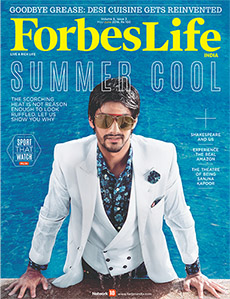 It is ironic that men have tended to box themselves into sombre blacks, blues and greys when, a couple of centuries back, no frill was too flouncy for the high-society denizen. Happily, some of that dandy dash is showing through again. Today, the ‘any colour as long as it’s black’ approach applies neither to cars nor suits. It is a free world for the modern urban man. He is fearlessly dabbling in paisley, stripes or checks, whatever catches his fancy: Let’s call it male liberation.

In a hat-tip to the return of this adventurous spirit, our Design Director Anjan Das and Chief Photo Editor Vikas Khot collaborated with designer Troy Costa to create a men’s summer wear montage. Costa plays with colour, cut and mood, choosing clothes from leading international brands. You can see the marriage of restraint and risk in his styling choices. The intent is to interest but not intimidate.

Which is exactly what theatre evangelist Sanjna Kapoor wants to do. Kapoor ran Prithvi Theatre for 21 years before starting up a new venture, Junoon. As a young woman, she chose to forgo the movies for the stage, captured by the magic of a live audience and the nostalgia of her heritage, she tells Angad Singh Thakur. That legacy traces back to Shakespearana, the travelling theatre company founded by her maternal grandfather Geoffrey Kendal. Two of her early performances with this group were in Twelfth Night and A Midsummer Night’s Dream.

As it happens, Shakespeare’s 400th death anniversary is being commemorated this year. And though India has appropriated the Bard in textbooks and Bollywood, “because of India’s colonial history, valorising Shakespeare, England’s crown jewel, above all other writers, is often met with resentment,” writes Nina Martyris, citing from the novels of RK Narayan, Arundhati Roy and Vikram Seth.

Another artist—Nasreen Mohamedi—is also currently being celebrated through a retrospective of her works at the Met Breuer in New York. “What would that restrained figure have made of the hype and hoopla on Manhattan’s Madison Avenue? Was she aware of what destiny had in place as her legacy? Would she have rejoiced? Retreated?” asks Kishore Singh, who says there was hardly a dry eye as the curator spoke about the artist who died, at only 53, in 1990. It is worthwhile to mark this in your calender if you head to New York before June 5.

Wherever you plan to journey—perhaps, the rainforests of Amazon or small-town America—we do hope these stories travel with you and enrich your summer.