Desmond Nazareth set up a craft distillery when he couldn't find tequila in India. Now, he's managed to give a toast to the desi spirit 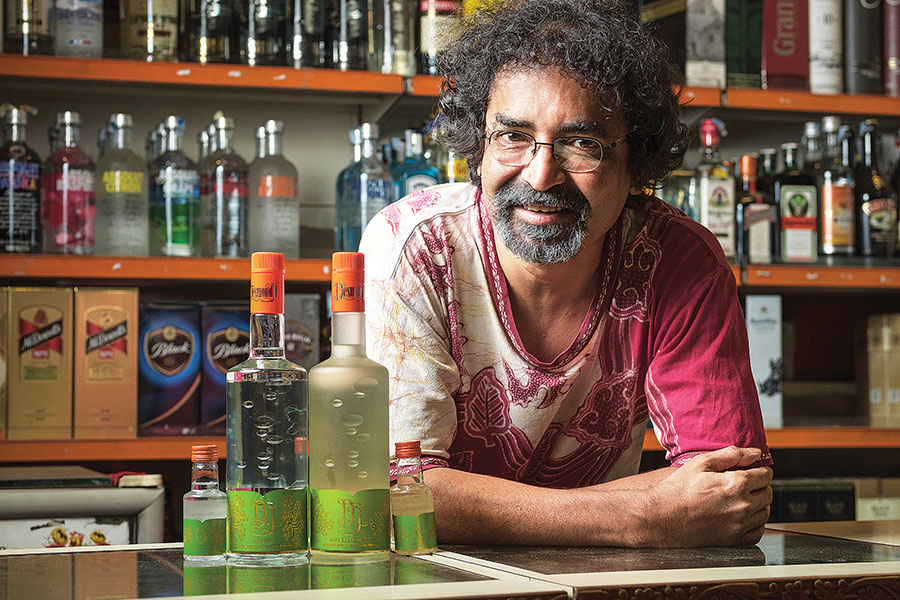 In the 18 years he has spent researching and working in the alcohol space, craft distiller Desmond Nazareth has several firsts to his credit—from making home-grown agave-based spirits to manufacturing artisanal cachaça-style sugarcane spirits.

His latest, also a first, is the traditional tribal drink mahua, pot-distilled to international standards, which was launched in Goa in June. “Mahua must be the world’s only flower-based distilled spirit. There are liqueurs made out of sweet flowers, because you can extract the essence of the flowers, but that’s not the same as fermenting and distillation,” says Nazareth, founder and managing director of Agave India, whose portfolio also includes liqueurs and cocktail blends.

Nazareth had been working on mahua since 2013, sourcing flowers and experimenting even as he tried to acquire the licences to make and sell what was essentially a ‘country liquor’. By law, it cannot be sold outside the state it is distilled in. “It took a good four years for the state in which I had my distillery, Andhra Pradesh, to give me permission to make mahua,” says the 61-year-old former IITian who had to go back and forth with the authorities to make it a non-country spirit. “Eventually, I was able to convince the authorities there that every international spirit started as a country spirit in some country,” he says.

Nazareth is no stranger to finding solutions to problems. In fact, all his projects, he says, result from questions he asks himself. “If I can’t find an answer, then I start digging deeper and sometimes end up discovering things.”

As he did in 2000 when the software developer, partaker of alcohol and amateur cocktail maker landed from the US and found that tequila wasn’t easily available in India.

Wondering why tequila, which is made from the agave plant, was only made in Mexico and remembering having seen the plant somewhere in India during his childhood, he set about researching the conditions for its growth. Nazareth compared the agave-growing regions in Mexico to India and found a match in the Deccan Plateau, where he finally located the plant.

When he found and sourced agave, he made a spirit. The story could well have ended there, had the first batch not turned out to be “as good, if not better” than about 80 percent of the tequila samples he had brought from the US. “That’s when I said, let’s see if I can do this more consistently… so I got very involved, and that gave me the idea that I could go beyond, and it could become, in time, a formidable competitor to Mexican tequila,” he says. He decided to make the agave-based spirit and “possibly other products” and “decided to apply for a licence to make a whole bunch of interesting products in India”.

What followed was getting permissions, setting up a distillery in Andhra Pradesh’s Chittoor district, and finally launching agave-based spirits under the brand name DesmondJi in 2011. “In 2000, I came up with the idea. I did roughly four years of research and four years of development till 2007; then I took four years to build my greenfield eco-friendly craft distillery, and in 2011, I launched my first product,” says Nazareth. And since margaritas, one of his favourite drinks, also need an orange liqueur, he decided to make it himself sourcing Nagpur oranges.

Today, DesmondJi sells over 10,000 cases a year, and also exports to the US and Europe. “Last financial year, we sold 11,763 cases [a case is 9 litres], in the few markets we are in. We have competition in two categories—imported agave-based spirits, which is a whole bunch of tequilas sold in India, and orange liqueur, where we compete against Cointreau and similar triple secs from around the world.”

The agave-based spirits market in India has grown at a compound annual growth rate of 9.1 percent between 2012 and 2017, with imported spirits clocking about 36,000 cases in 2017, according to IWSR, which analyses the global beverage and alcohol market. “Tequila is still only a 40,000-50,000-case market in India. So DesmondJi, with [annual] sales of over 10,000 cases, represents a healthy addition, but it is still small due to the small base of tequila,” says Vikram Achanta, co-founder and CEO of drinks training and consulting firm Tulleeho.

“Both the agave-based spirit and now mahua, along with the other products in his portfolio—orange liqueur, margarita mix and cane spirit—all represent possibly the first time these products have been commercially made in India. And with mahua, what he [Nazareth] has done to get it classified as an IMFL [Indian made foreign liquor] in Goa, has opened the door for other entrepreneurs to also start similar ventures,” adds Achanta.

Mahua had been on Nazareth’s original list of spirits to make but he removed it when he realised that even getting licences for agave-based spirits could become a problem if it was on the list. “I thought let me see later on in life, once I’ve got agave going and some two three years down the line if I have developed a reputation for a brand that makes international quality spirits, perhaps I could make Indian country spirits at that level,” he says.

Though what took perhaps a few months with agave, took almost five years with mahua. Along the way, Nazareth also realised that mahua had the potential to become India’s national spirit. “What is important for a national spirit is that it should have provenance in a fair part of the country. There are about 10 states where mahua is currently made. Besides, the drink has deep roots in tribal culture, so there’s a lot of folklore attached to it. You can also get what is known as a geographical indication for it. The mahua tree grows largely in India, so we’ve got all the positives.”

Agave India currently has a production facility in Andhra Pradesh while the blending, bottling and packaging is done in Goa. It has raised $3 million so far in funding from around 70 angel investors. “But the way the company is structured, only four investors have been actively elected to make all the decisions, including financial and selling of the company or the brand or whatever; those four people include me,” he says.

Though they have the capacity to produce, distribution remains a challenge. “As a small player you are not taken seriously, distributors don’t want to deal with the small volume brand. We are by definition a niche player, not a volume player,” he says.

“Being a niche alcobev entrepreneur requires deep pockets and an enormous determination to succeed. It requires a certain bloody-mindedness of spirit, which would be hard to find in an entrepreneur in any other product category. The dice is loaded against you, from the regulatory landscape to finding sources of supply and finding distributors who will stock your products,” says Achanta.

An earlier distribution tie-up with Sula Vineyards fell apart considering wine and spirits are governed by different regulations. Nazareth says they are now looking for a strategic partner. “A good strategic partner could place us in every tier 1 and tier 2 city in less than six months. Compared to that, it has taken us three years just to get into Delhi; we could have grown four times in volume if we had been in Hyderabad and Kolkata and Chennai,” says Nazareth whose products were first sold in Goa and, over the years, slowly in Daman, Puducherry, Mumbai, Pune, Bengaluru and Delhi.

Meanwhile, on the cards are a sparkling mahua beverage and collaborations with craft brewers for beers using the different spirits the company makes. Not to mention a script that Nazareth has co-written and wants to see being made into a film (he has studied film-making). There’s also a project that aims to empower a billion kids from the bottom of the pyramid. But that’s a story for another day.

Tweets by @forbes_india
Future of work: These are the top destinations for robotics in India
A lot of opportunity ahead in India: Reed Hastings