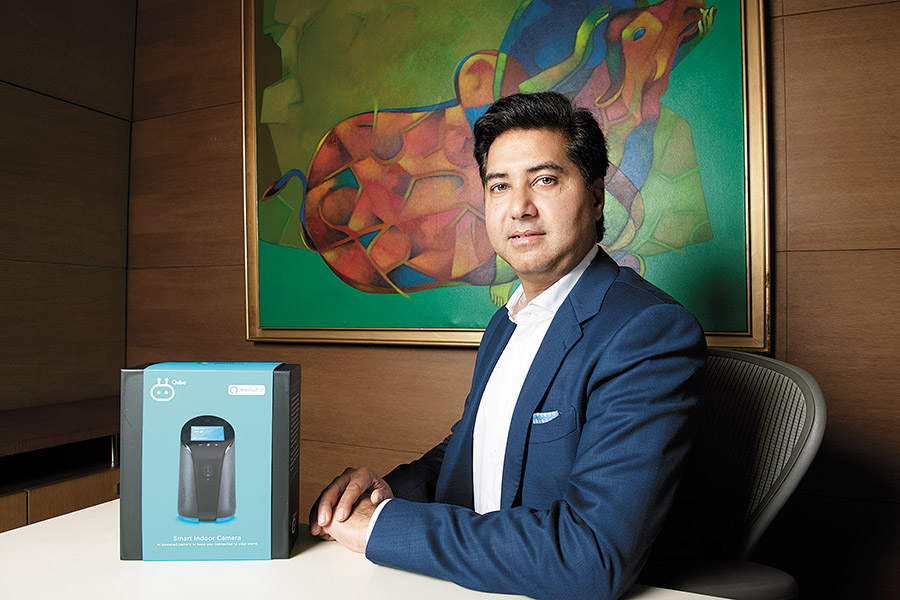 Ujjwal Munjal is a firm believer in the Make in India dream.
Perhaps he takes after his grandfather, the illustrious Brijmohan Lall Munjal, who built the Hero group into a powerhouse with businesses across automobiles, finance, renewable energy and education. That is possibly why the third-generation scion has been at the forefront of diversifying the group’s interest in the emerging smart home products market and the electronics space.

The Munjal family business has been widely recognised for its manufacturing capabilities. The late patriarch Brijmohan Lall, along with his brothers Dayanand, Satyanand and Om Prakash, started a bicycle parts business in Amritsar, Punjab, in 1944, later foraying into bicycle manufacturing. Hero Cycles grew to be India’s largest bicycle manufacturer by volume in the 1970s, while Hero MotoCorp became the country’s largest motorcycle company by volume.

“When we founded Hero Electronix in 2015, the idea was to look at opportunities in the interplay of software and hardware,” Munjal, founder-director, Hero Electronix, tells Forbes India. “As a country, we’ve had strength in software and have been a dominant player across the world. But we are far behind when it comes to hardware,” he says. “With connected devices, everything around us is being reimagined and there comes the interplay between software and hardware. So we wanted to look at opportunities there, especially when there is a massive drive around Make in India at the group level.”

Last October, the company formally entered the smart home devices category with Qubo, whose competitors include Lenovo and Xiaomi. At the time of the launch, Qubo’s portfolio included a smart indoor camera, smart gas sensor, smart smoke sensor, smart door, and smart plugs. “We wanted to build something that would emerge as the face of the company because it’s more consumer-centric,” Munjal, 41, says.

Qubo is only one of the arms of the larger Hero Electronix group, which has been acquiring other ventures to build four key verticals across the electronics and technology business. Apart from Qubo, there is Tessolve, a semiconductor engineering solution provider, Zenatix, a product engineering and enterprise solution, and MyBox, a set-top box business.

“Each of the teams is supporting the others,” says Munjal, the son of Suman Kant who is the chairman of Hero Electronix. “Some of the embedded work that’s happening at Qubo has come from Tessolve. The Internet of Things [IoT] platform was developed between Zenetix and Qubo. So businesses have a common thread running through them, and I think more intersection will take place. But we intend to run them as independent businesses.”

Setting it up
The Hero group’s foray into the electronics segment started in 2015 with the acquisition of MyBox, which is the largest multi-operator manufacturer of set-top boxes in the country and supplies to many direct-to-home (DTH) and cable operators like Airtel and DishTV. The B2B provider claims to have sold over five million boxes. “We did not plan what the business will look like eventually,” says Munjal. “But we did not want to build the businesses ground up, instead partner with companies who had a background in these areas.”

The company then acquired Bengaluru-based Tessolve in 2016, which, as of today, has over 1,500 engineers across India, the US, Germany and China. It works with eight of the top 10 semiconductor companies in the world, with clients including Qualcomm, AMD and Intel. “We took Tessolve from a niche test engineering services company to a broad-based semiconductor service company. They now do everything from chip design to embedded systems,” explains Munjal.

Munjal then took the final leap into the smart home device category with Qubo, when he realised that Indians were fast adopting a smart, connected lifestyle. He was amazed to know, he says, that most of the 550 million internet users in India accessed it on their phones, and that there are 60-odd million people using wearable devices. “We are the 10th largest OTT market in the world and have some 10 million connected vehicles, of which some five to six million are connected trucks. That was a huge opportunity,” he says.

Qubo now plans to launch three new products, including video doorbells, low-cost cameras and baby monitors in the next few months, showing its intent to bet on the smart home category. Much of that, Munjal reckons, will be India-centric, with a firm grip on data privacy and quality.

Hero Electronix, which has a research and development team of over 100 people, takes about 18 months to develop a product, after which the design and planning is done by them. The manufacturing is carried out by its partners, who are large companies in this space.

“It is still a nascent market, and therefore, opportunities to grow are big. Unlike in smartphones, where the category was dominated by local Indian brands and then Chinese brands completely killed that competition, this is the other way round,” says Yugal Joshi, vice-president of Everest Group, a Dallas-based consultancy firm. “The IoT and AI-enabled smart devices market is dominated by non-Indians and it will be interesting to see how companies such as Hero can compete with deep-pocketed and well-funded Chinese players.”

Going all out
Hero Electronix is eyeing more acquisitions to build the company into a $1 billion venture in the next few years. Already, it has mopped up revenues of ₹600 crore, and is looking to triple that in three years. In 2020, Munjal also plans to invest around ₹200 crore for its expansion. Apart from the various acquisitions, he has already invested over ₹400 crore into the company. The company claims it is profitable, but does not divulge details about its financials.

“We are keen to get more involved in the artificial intelligence space and are keeping a close watch on what is happening over there,” Munjal says. “But, I think the focus is to just grow these verticals. Beyond that, we’d like to look at more partnerships, acquisitions, and incubations in artificial intelligence.”

The company also wants to innovate around its existing products. For instance, Munjal and his team are attempting to pivot MyBox to newer areas like hybrid set-top boxes or [digital assistant] Alexa-based models.  “It’s a small, evolving market. But set-top boxes will remain and the software capability that MyBox has can be used in a more broadbased way.”

Interestingly, the company’s foray into smart homes, too, was largely by accident. “We started incubating this business under MyBox as a value-added service on a set-top box. We quickly realised that the sales channel and the customer for a set-top box are very different from where we want to go. So we pulled it out of MyBox and created it as an independent business altogether,” says Munjal.

Now, over the next three years, the company wants to ramp up its offerings around smart mobility, especially dash cameras and on-board diagnostics in addition to smart child care, baby monitors and wearables.

“We’ve got a truly made in India, designed in India product,” Munjal says. “We have also got a proprietary cloud platform, which is hosted here in India itself.”

Besides, Munjal says his company has also been able to allay fears of data privacy. “It is completely encrypted, not just the video streams, but even the cloud. Even Qubo doesn’t have access,” he adds. “All of us keep looking at products from the East and are worried about who is watching or where the data going or being stored. We’ve tried to address those concerns.”

Being just five years young, can Hero Electronix really grow into a billion-dollar venture? “All of this is a step in the right direction and shows some serious intent from the group,” says Shobhit Srivastava, research analyst, mobile devices and ecosystem at Counterpoint Research. “They have been able to make a mark, especially in an industry that is growing fast. For now, they seem to be using all the technology available with them to build their in-house capabilities before going out and expanding further.”

Others agree too. “Hero’s investments in engineering and technology have been strong and in the right direction to build capabilities. Moreover, leveraging market standard Alexa and focussing on AI-centric offerings is a good strategic move,” says Joshi of Everest.

Munjal is also looking to build Qubo into India’s premier smart home product maker. “There isn’t one big brand out there,” Munjal says. “We want to be that go-to brand that is reliable. So the idea would be to try and get a series of products under the Qubo brand and grow forward.”

After all, who better than a Hero group scion to know what it takes to scale up a business.

Tweets by @forbesindia
Quid pro...whoa! Inside cybersecurity firm CrowdStrike's success
Two ways the economy could have recovered faster after the great recession