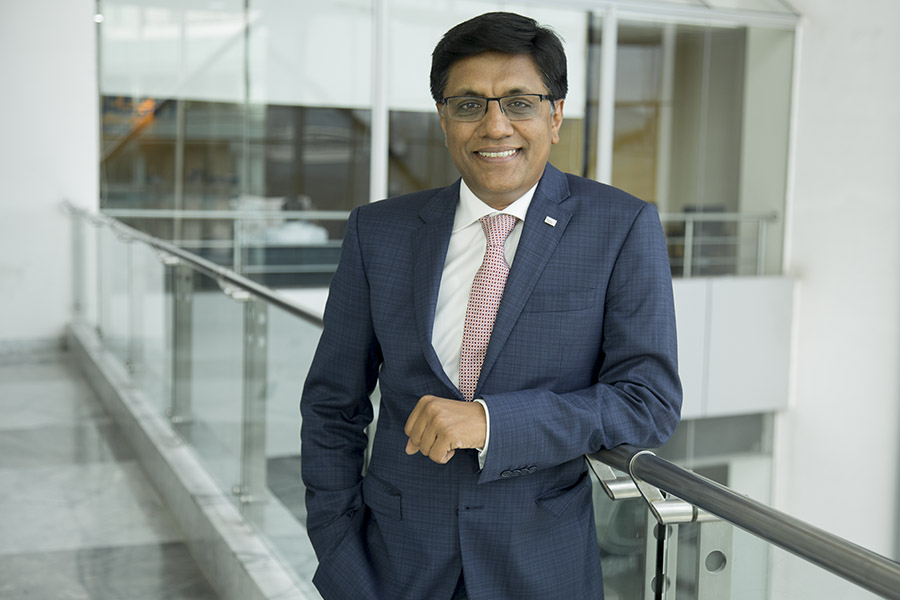 When he started Mirae Asset Mutual Fund (MAMF) in India in October 2007, Gopal Agrawal’s first objective was to find a fund manager who would think in micro detail. Agrawal, who was with SBI Mutual Fund, was approached by the Indian subsidiary of Mirae Asset Global Investments, the South Korean financial firm, to build a mutual fund business. The firm provided a seed capital of $50 million. At the time, an asset management company (AMC) in India required a minimum capital of just Rs 10 crore ($1.6 million), which has now been revised to Rs 50 crore. Simply put, MAMF had the arsenal—or the financial muscle—to become a powerful fund house.

For that, Agrawal also needed the right people. He had his sights set on Neelesh Surana, who was working with ASK Group’s portfolio management business along with the star fund manager Bharat Shah.

Agrawal liked Surana’s approach to stock picking and asked him to come on board. It was an unusual choice. The mid-2000s were a period of star fund managers, while Surana had a low-key profile. But that was the point: MAMF planned to take a process-driven approach to fund management.

MAMF’s offer was tempting for Surana who was eager to try the mutual fund platform. “It was a challenge I wanted to take up,” recalls Surana, 48, who joined as chief investment officer–equity in January 2008. Agrawal, who quit MAMF in April this year and moved to Tata Mutual Fund to head its equity investment team, became the overall investment head of the AMC.

Nine years on, MAMF has assets under management (AUM) of Rs 8,500 crore and has launched four funds. The Mirae Asset India Opportunities Fund (MAIOF), with an AUM of Rs 3,197 crore, and the Mirae Asset Emerging Bluechip Fund (MAEBF), with an AUM of Rs 3,297 crore, have become the AMC’s flagship schemes. (MAEBF is now closed for lump-sum investments and only investments through systematic investment plans are allowed.) 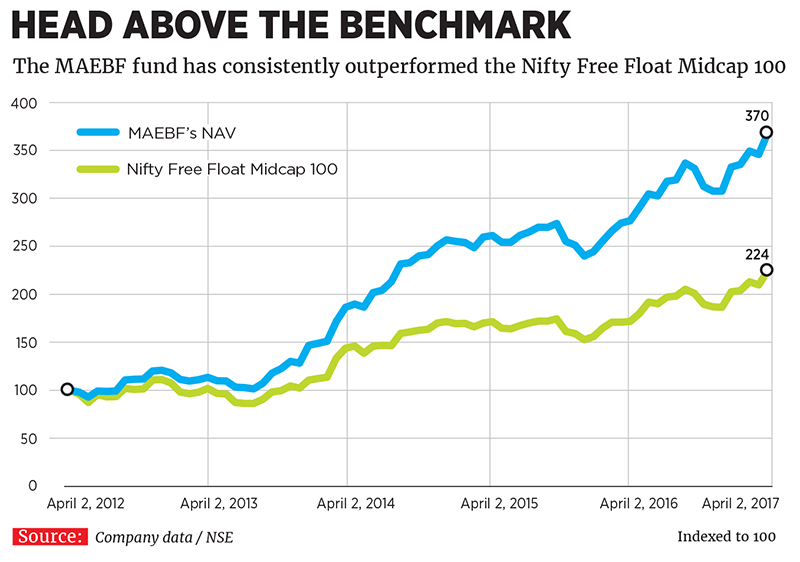 Over the last five years, MAIOF has given annualised returns of 19.53 percent as against its benchmark S&P BSE 200’s 12.94 percent. In the same period, MAEBF has returned 29.27 percent annually compared to the Nifty Free Float Midcap 100’s 17.33 percent. “There is no short cut to success. Consistency of performance takes some time to get noticed, but once that happens then nothing can stop you,” says Agrawal, 43, of MAMF’s gradual and steady growth.

“MAEBF has remained one of the most consistent performers in its category. Both [MAEBF and MAIOF] have stood out in terms of performance given the focus on bottom-up stock selection and investing in quality stocks that tide over long-term market volatility,” says Kaustubh Belapurkar, director, fund research, Morningstar India.

Shortly after it was launched, MAIOF went through a tough phase after collecting Rs 110 crore in April 2008. The challenges were largely related to the global financial crisis, and the net asset value (NAV) of the fund fell to Rs 6 in March 2009. But it bounced back in 2010, returning 115 percent compared to the S&P BSE 200’s 92 percent. The bet on sticking to consumer goods, health care and banking stocks worked well for the fund. More importantly, the fund had avoided weak cash-generating businesses like telecom, construction and infrastructure. When the fund was launched, the market had seen an infrastructure boom, but those were also the stocks that fell the most after the financial bust.

It wasn’t easy for the sales team, recalls Surana, since MAIOF was run by relatively unknown managers. It was only in 2011, after exhibiting consistent performance, that distributors started taking the fund seriously. “It was a time when distributors wanted to be with funds that were consistent,” says Surana.

Another turning point came in the last quarter of 2010, when MAIOF was over two years old and had grown to Rs 150 crore: Citibank’s wealth division approved it as one of the many funds to recommend to clients. This was a feather in the fund’s cap because the bank doesn’t approve funds with a track record of less than five years and a size below Rs 500 crore.

“After Citibank, other distributors and advisors took to us easily and then we moved fast,” says Swarup Mohanty, CEO, MAMF. He points out that it took MAIOF six months in 2011 to grow from Rs 180 crore to Rs 200 crore. But even in this, “the last Rs 6 crore were the most difficult to add. I remember my distributor telling me how it was just not happening,” he says.

But by June 2014, after over six years of operations, MAMF’s AUM—with the addition of more funds—had clocked Rs 1,000 crore. And the next Rs 7,000 crore were added even faster, in less than three years.

In July 2010, at a time when other funds were selling large-cap funds, Mirae launched MAEBF, which concentrated on investing in mid-caps. It was a well thought-out strategy—Surana and Agrawal felt mid-caps were available at good valuations and could not be ignored.

The fund managers evolved an investment philosophy of creating diversified portfolios that generated consistent risk-adjusted returns. The approach is to identify a set of stocks at a reasonable price and hold it for an extended period of time. These portfolios are actively managed and try not to miss opportunities where the price of the stock is below its fundamental value. “What has really worked for us is the concept of stock-picking,” says Surana. “We do not shy away from contrarian opportunities when good businesses pass through a bad patch. Here the near-term prospects are hazy but long-term opportunities are intact.”

Maruti Suzuki is a classic example.The stock was battered after strikes and lock-outs at the automobile company in 2011. MAIOF, at the time, purchased the stock at around Rs 1,100 and holds on to it; today, it has moved up six times.

Another one of Surana’s best picks was Natco Pharma, which the MAEBF fund purchased at around Rs 200 a share three years ago and continues to hold at Rs 900 levels.

An interesting play for Surana was in the batteries space. He started buying Amara Raja Batteries Limited (ARB) in 2009, when the stock was trading at Rs 45; since then, it has grown around twenty times to over Rs 800 a share. The stock is presently a part of the company’s MAEBF portfolio.

When Surana started buying ARB, Exide Industries was the clear market leader. ARB was the challenger and had only started to garner market share. Over the next five years, ARB outperformed in terms of growth and other fundamentals and its market share increased. Then, just when Exide Industries lost value after five years of underperformance, Surana shifted his attention to that stock in 2015 and it was bought across MAMF’s four funds.

Finding differences in companies operating in a similar industry and tracking them on incremental changes in terms of management and capital allocation is not easy. Surana started buying Exide Industries with the belief that it would make a comeback. His logic was simple: While Exide’s growth had been dented, it had not lost its fundamental strength. The stock has moved up 70 percent over the last one year even as ARB has remained flat.

Surana’s other big pick has been IndusInd Bank, which he purchased at around Rs 200 a share in 2011 and saw it go to over Rs 1,400 now. He was betting on the leadership at the bank after Romesh Sobti took over in 2008. IndusInd Bank is currently the top holding of MAEBF (See table). 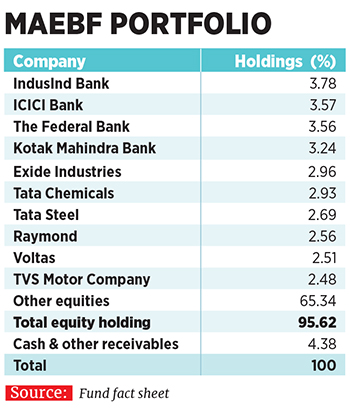 Since the idea is to look for deep value, Surana also likes to look at stocks that are beyond the BSE 500. These are stocks that can be risky but, if carefully researched, investors can find the biggest multi-baggers in this space. One of them has been the specialty chemicals company Vinati Organics Limited. A niche business with a conservative management, Vinati has been growing at 25 percent annually. Surana started purchasing the stock at Rs 120 levels in 2012, when the company’s market cap was around Rs 600 crore. In four years, the stock has crossed Rs 700, and the current market cap is over Rs 3,800 crore.

But while he might have total conviction in a stock, he doesn’t take concentrated bets in any of the companies, especially for the MAEBF. For instance, despite his complete belief in ARB, the stock accounts for just one percent in MAEBF’s portfolio. “Thankfully, as of now, we haven’t made any big mistakes. In fact, we are paranoid we will make one and that is the reason we are so careful,” says Surana.

The people at MAMF are so paranoid they are afraid to even celebrate. When AUM touched the Rs 4,000-crore mark in May 2016 they simply put up a small note in the canteen—there were no celebrations. “Later, when we crossed other milestones, we simply communicated through WhatsApp messages. I know this is harsh but I guess we now have adopted the Korean culture of not getting too excited even in our best achievements,” says Mohanty.

They might be careful, but Surana remains optimistic and feels India is a good stock-picker’s market. Even today, when the Sensex is trading at a P/E multiple of around 23 times, Surana feels there is growth opportunity and a prudent fund manager can generate good returns. Surana’s belief is that if the GDP is going to clock 7 percent growth, there will always be companies that will be growing at twice that rate. “These companies are not easy to find but it’s not impossible.”

Tweets by @forbes_india
IPL's power play: A hit for cricket lovers, money-spinner for its stakeholders
Mercedes-Benz: Breaking the class ceiling