For many small entrepreneurs around India, growth and prosperity come riding on the Delhi Metro

From train tokens to ear tags that track the medical history of cattle to prevent the mad cow disease in Europe. For Noida-based radio-frequency identification (RFID) company, APK Identification, the journey has been eventful indeed.

When brothers Alok and Puneet Kapoor pooled together Rs. 20 lakh to start the company in 2003, they had an inkling that RFID was going to be big. Europe was taking to RFID for several applications and would need cheap suppliers. However, their big break came not from Europe, but from the Delhi Metro project.
All thanks to “Metro Man” E. Sreedharan’s decision to indigenise the supply chain to make it dependable and to bring down costs.
“At the replacement stage, it is all the more important to have vendors in the domestic market where we operate. We cannot go to Italy or Germany every time. During operation and maintenance stage, we will need support from these people,” says the Delhi Metro Rail Corporation (DMRC) managing director. As a young technocrat, he was in charge for designing and implementing India’s first metro in Kolkata in 1970. His achievements include the completion of the Konkan Railway within budget and ahead of schedule in the 1990s.
Sreedharan is staunchly opposed to handing out projects to private players because “they will get parts from China or other places where it is cheap and move on. They will not have any interest in developing the ancillary industry.”
The Metro has spawned an industry whose value is estimated at around Rs. 80,000 crore, if one were to take into account all metro projects coming up in Mumbai, Hyderabad, Chennai and Bangalore.
In the process, several small companies like APK Identification are blossoming.
In 2005, the company won the contract to supply electronic tokens used as tickets. Delhi Metro’s then supplier, a leading international manufacturer, provided them at Rs. 240 per token. APK provides them at Rs. 20 a piece.
Over the last three years, the company has supplied over 21 lakh tokens to the DMRC, saving it around Rs. 43 crore. In the bargain, APK has seen its business expand and new opportunities open up. “The National Rural Employment Guarantee Scheme, national ID card and several other initiatives have all decided to take to RFID applications; the Metro has clearly shown the way,” says Puneet Kapoor, who plans to bid for these tenders.
APK is now entering tie-ups with companies overseas to provide electronic ear tags that will help record the medical history of cattle.
The company is not alone in benefiting from the Delhi Metro. Around 40 components and services — from lights to glasses, air-conditioning systems and track fittings — which used to be supplied by foreign vendors are now being supplied by Indian companies. “When we started operations there was almost zero percent contribution from Indian suppliers. But now, in many areas [of Metro operations], they supply 30 to 60 percent of our components,” says Sreedharan.
Take for example Delhi-based Sidwal Refrigeration. Owned by S.S. Sidhu, the company supplied air conditioner components to a railways coach factory in the late 80s. In 2000, it was chosen as the local partner by an Australian company supplying air-conditioners to the Metro.
But the Metro soon found that the price demanded by the foreign supplier was prohibitive, and decided to source directly from Sidwal in 2005. The company claims to have saved the Metro Rs. 15 crore so far.
Recently, it got orders from BEML (formerly known as Bharat Earth Movers Limited), Bangalore, a supplier of coaches to the Delhi Metro. The order has given Sidhu the confidence to participate in bids for metro projects in Europe. “We have a larger facility now and we are very competitive in our pricing when compared with the overseas suppliers,” says Sidhu.


Similarly, there are others like Mumbai-based Siepmann’s Card Systems, which supplies smart cards used by regular commuters, and landscaping firm SK Garden Traders.

Set up by brothers Vishwanath and Ravindranath Bhas, Siepmann’s was selected in 2006 by the Delhi Metro to replace its existing international vendor. “The Metro was the first to bring in the smart card technology to a transport infrastructure project and today the railways, the Delhi Transport Corporation and several other agencies are all trying to install similar systems,” says Ravindranath.
SK Garden Traders’ 37-year-old owner, Sunil Kumar, too has gained significantly thanks to the Metro contracts. “I set up my business in 1992… but I did not have a steady stream of orders or revenue.” Since 2002, Kumar has done jobs worth over Rs. 2 crore for the Metro. “You can say that my business has grown with the Metro… I have continuity in orders that promises to extend for several years from now and because of this, I am able to invest in people and equipment.”
Making Way
Sreedharan says he is dead against the practice of calling tenders repeatedly for components that require technical expertise. “We identify some people and give them repeat orders. This way they are also able to develop their ability [in supplying quality products].” Government departments usually lose out on capable vendors because they rotate their orders frequently, he adds. The Delhi Metro project is estimated to have handed contracts worth less than Rs. 1 crore to over a hundred companies. The total worth of such contracts is about Rs. 500 crore. This means, a clutch of small companies got repeat orders over the last seven years. 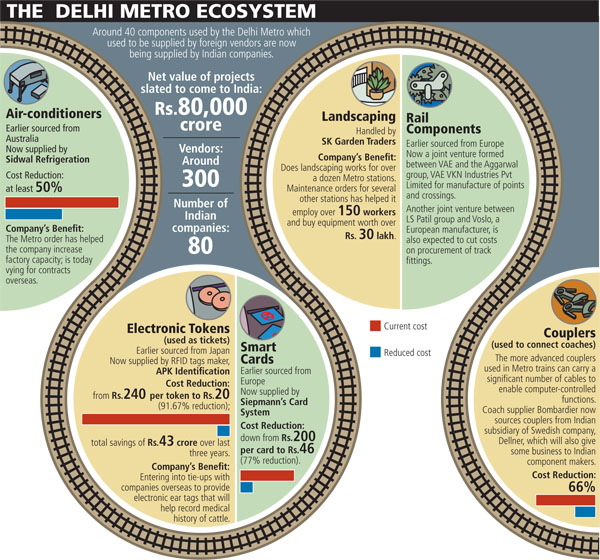 “The Metro has contributed immensely to the cause of small businesses by standardising almost every sphere of activity and encouraging businesses to upgrade their capabilities. I think the Metro experience in dealing with small companies should be extended to all construction activities in the country so that there’s improvement in the way projects are executed,” says Anjan Roy, economic adviser to FICCI.
However, it is necessary that the people heading the projects have a track record of impeccable integrity. “If all orders are given to a clutch of companies, then questions may be asked,” says a top government official heading an infrastructure department based in Delhi, requesting anonymity. Sreedharan agrees with that caveat. He says that even while giving development orders, it must be ensured that the “system is seen to be transparent and just”.
All said, a well-oiled vendor network will be more important as Bangalore, Chennai, Mumbai and Hyderabad start their Metro systems. Several businesses that are trying to grow may find an opportunity in these massive Metro projects.

Tweets by @forbes_india
Do You Need a Family Office?
It's Been a Hard Day's Night