How Does Private Equity Work in India?

Across the skyline of India's cities, countless cranes and towers of bamboo scaffolding offer testament to the building of a new economy. "India is in the middle of a high growth phase," says Ashish Dhawan, co-founder of ChrysCapital which manages $2.5 billion in six funds. "We're starting from a low per capita income and we've yet to reach middle income status. If you look at that macro backdrop—8% real growth, 13% or 14% nominal growth—the appropriate role for private equity is really to provide growth capital for companies that are serving the consumer."

Dhawan and others in the field make a clear distinction between private equity in India and other parts of the world. "Our belief has been that over the last decade, the sweet spot for private equity is really not what it is in the Western world, which is leveraged buyouts, financial re-engineering, taking family-owned businesses and professionalizing them," he says. "Instead it's working with entrepreneurs who have a mid-sized business, putting in capital and helping the business to become three or four times its size over a five-year period of time." ChrysCapital has completed nearly 60 deals since 1999. 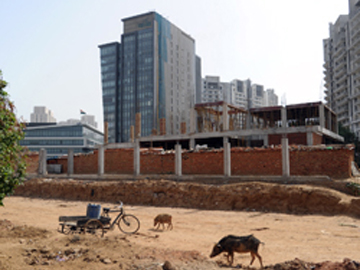 The legal environment further shapes the industry. "We don't do turnarounds," says Dhawan. "India's bankruptcy laws are fairly out of date. There is no real distressed market here. The banks have healthy capital ratios, so they're not looking to sell off loans. It's hard to come in and get a sweetheart deal on a failing company."

Dhanpal Jhaveri, partner and CEO of Everstone Capital Management, a firm with $1.5 billion under management, sees this growth-focused approach continuing. "Demand-supply gaps will continue for at least another 10 years, allowing for this growth model to continue. With 58% of GDP driven by domestic consumption, a rapid growth of the middle class, and urbanization, we think that domestic consumption is likely to be the cornerstone of Indian growth for the next 10 to 20 years."

A Flood of Foreign Capital
The allure of rapid growth has attracted foreign capital. The money typically comes from institutional investors: endowments, sovereign wealth funds, pension funds, funds of funds, and family offices. A common pattern among firms is to start with U.S.-based sources, then to diversify, with subsequent funds drawing on investors from Europe and Asia.

Domestic institutional investors shepherding Indian capital have tight regulations on their ability to make equity investments and limited experience with alternative asset classes like private equity. "We are still ramping up as a country in terms of our understanding of this asset class," says Sanjeev Aggarwal, co-founder and senior managing director of Helion Venture Partners, a $600 million India-focused venture fund. "It is very high-risk—you can lose all your money. And returns take a long time because company-building is a long process. Right now, this asset class is better understood in the Western world, but that will change over time."

The overall size of private equity and venture capital is relatively small, but experts see it as an important component of the economy. "I think the industry is extraordinarily significant," says G. Sabarinathan, a professor of finance and entrepreneurship at the Indian Institute of Management, Bangalore. "In order to harness the tremendous entrepreneurial energy of India in the most optimal way, you need enlightened capital that is willing to wait three to five years, back the right team, and give the right post-investment support."

But Sabarinathan sees a major challenge: "There is so much competition for deals," he says.

That competition developed because interest in India came as a flood, according to Dhawan. "There has been a rush of capital coming in. Many emerging markets became very attractive in the 2006-2007 period. ChrysCapital had generated particularly good returns in the five years prior to that. A couple of global firms that have been here longer, like Warburg Pincus and Citibank, also generated good returns. That attracted all the global funds to India." He adds, "They came in all at once, and there was this massive crowding effect. The overhang of capital led to regulations going up and a lot of competition."

That competition to invest has made it harder to meet targets on returns. "Valuations are going through the roof," Sabarinathan said. "Part of the reason people lose money is that they pay far too much up front."

Making Do With a Minority Share
With a booming economy in recent years, entrepreneurs have been succeeding and saw little reason to hand over their company for growth capital. "Indian management is very control-sensitive," Sabarinathan says. "They try to defer raising external capital as long as they are able. One way they do that is by using a lot of leverage: the debt market is a lot more forgiving in India, so founders tend to borrow a lot."

Ashish Dhawan says that one of the biggest challenges to private equity in India is minority ownership stakes. "You're not in control. You're at the mercy of the entrepreneur, because the entrepreneur typically owns 51%." He adds, "We only selectively help when there are one or two key hires that need to be made, but we're not really involved with changing the whole management team or bringing in a new CEO. In that sense, we're different from a firm in the Western world where they would also have senior operating partners on the team who would get involved with portfolio companies."

Where's the Exit?
"There are few instances of VC/PE funded companies that go through a second funding round," Sabarinathan says. "In India it is almost an article of faith that there will be one round of financing and then the company will go public."

That may change, at least in the short run. "The IPO market is not looking good at all, currently," Sabarinathan says. "The IPO windows tend to be fickle. They open for a short period of time." However, when those windows do open, even small to mid-sized companies have gone public.

The periodic option for going public while relatively small gives private equity additional opportunities. "Private equity here is not just investing in private companies, but also in public companies," says Dhawan. On the other hand, he adds, the public market can act as a competitor to private equity. "If a company is already public, it can easily do a follow-on offering as opposed to looking to the private equity sphere for funds."

On top of that, exits are a concern. "Our market is still not very liquid. It's not a very deep market," says Dhawan. "In good times, clearly, you can exit even from the 500 largest listed companies by market cap. In slightly more difficult times the liquidity tends to be concentrated in the top couple hundred companies. Given the private equity invested in mid-sized companies, and you may have a large stake—20, 25, 30%—it may be difficult to exit some of these companies, particularly with entrepreneurs that are not ready for a strategic sale, which is the case in a vast majority of situations."

Sabarinathan registers concern about exits as well. "There has been a recent trend in foreign funds to shut down their Indian outposts and to cut back on the India allocations. I think that is partially driven by the perception that exits are going to get more and more difficult."

Competing Globally, Growing Locally
Given that India's economic liberalization happened in 1991, the sector, which depends heavily on Western-style business practices and entrepreneurialism, is maturing quickly, though not without some false starts. "I think investors are now discerning and demanding," Sabarinathan says. "There is an enormous maturing in the businesses they fund. These businesses could be in any part of the world; they are globally competitive. It doesn't matter that they are in India. Whether it's pharmaceuticals, media, technology, or manufacturing, in terms of scale, scope and quality they are globally competitive. That is a very significant difference."

More and more private equity firms are Indian owned and managed. Sabarinathan is waiting for data to find out if that will make a difference to returns, but he does believe that "it's important that foreign investors have Indians, raised in India, on their team." He adds, "Although Indian businessmen are trying to learn Western best practices, cultural and social factors contribute to making this a very different market. Law and property rights are very different. Many things you take for granted simply don't work the way they would in the United States or the UK. On very crucial matters, the average Indian tends to be quite clannish—or to put it even less charitably, they tend to be rather parochial."

Meanwhile, Indians who have had successful entrepreneurial careers overseas are returning to India, further strengthening the industry. "Entrepreneurs who made money in the last couple of decades want to give that money back to help create more entrepreneurship," says Aggarwal. "An angel investor community is emerging."