Badri Seshadri's Lessons From the Outsider

Badri Seshadri, promoter of New Horizon Media, talks about his fear of money and finally fitting in 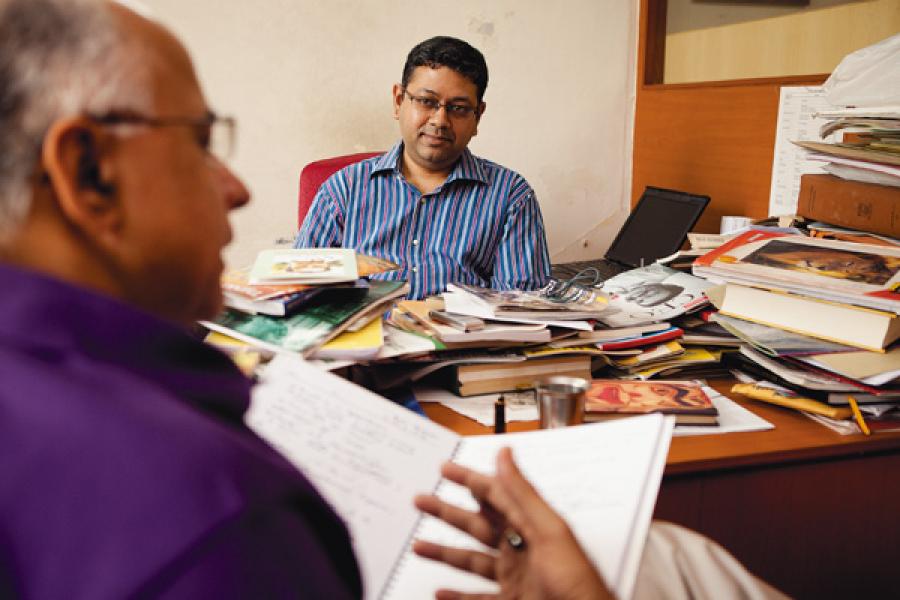 When Forbes India editor Indrajit Gupta suggested I invite Badri Seshadri to Zen Garden, I did not know who the man was. “Badri started his entrepreneurial journey co-founding cricinfo.com”, I.G. explained to me. “But this is the man who is set to revolutionise the somewhat sleepy, unglamorous regional publication scene; that is why you should meet him”.

Badri’s company, New Horizon Media, is the impressive proof that all is not lost when it comes to the world of regional language book publishing. It is not an amalgam of mostly old-world literature, mythology, some current prose and poetry with waning readership and worrisome financial viability. It is a world of impressive, intelligent and expanding readership that is translating works such as Ramchandra Guha’s India After Gandhi, Salman Rushdie’s books and the biography of Dhirubhai Ambani.

Yet, the regional publishing scene is somewhat reminiscent of family businesses steeped in respectable conservatism. This isn’t where you expect to meet a first generation entrepreneur who went to the Indian Institute of Technology (IIT) and then did his Ph.D. from Cornell University where his research was on metal forming particles. Son of a school teacher in Nagappattinam, Tamil Nadu, Badri Seshadri had no idea about the IITs; nor did his father. One day, when an old student came visiting, he told Badri’s father that he should go to IIT after high school. Badri’s father could not afford expensive preparatory classes. So he sent a post card to IIT Madras enquiring about their admission process. In a few days, there came a reply and along with it, yesteryear’s question papers. Badri got to work. Much to his amazement, Badri made it and one day he arrived at the hallowed portals of IIT Madras, only to be greeted with a deep sense of alienation.

Says Badri, “In the first year, in order to choose my humanity subject, I had to take an English test. All those who got good marks were allowed to choose German or other easy subjects and all those who ‘failed’ that test were forced to take English. Needless to say, I failed. I was saddled with English for two semesters. But the sad thing was I couldn’t do well in those classes either.

Here was an English teacher who knew pretty well that she had to deal with the ‘dregs’ of the society, and she hated it and made it clear in the class what she thought of us.

I can remember only two friends for much of the first semester in Mechanical Engineering out of a class of 65 or so, because those two were the only ones who would speak to me in Tamil. Then it widened to about five friends. Normally, most freshers get a room only on the ground floor (considered to be low class!). By the end of first year, all those in the ground floor move to first or second. I was so friendless that I simply decided to stay for the second year at a stretch in the ground floor. Only in my third year did I move to the first floor.”

From that first floor at IIT Madras to Cornell in Ithaca, USA, wasn’t that difficult a transition. At Cornell, he successfully completed his doctoral work. But towards the end, he got disenchanted with the cliques and politics of the academic world and this is when a chance encounter with a researcher in England and a cricket enthusiast in Australia led to cricinfo.com.

I want to know if alienation is a recurring theme in his life.

“In IIT, I certainly felt like an outsider,” he replies. “It wasn’t that difficult in Cornell, but I still felt out of place. I would agree that I even now feel an outsider in the world of business. Cricinfo was too nerdy an operation and I didn’t feel totally out of place. However, when there was an opportunity to build a new venture, I chose something in vernacular, simply because in addition to other things, I thought I would feel ‘in place’ than out of place. Yes, it (the sense of alienation) is certainly a recurring theme in my life.”

He adds, “Money has certainly not been a motivating factor. I have the strong ‘old world’ middle class behaviour of fearing money. When my father had finished B.Com., his father had advised him not to take up a job in a bank. The reason was that my grandfather felt that dealing in money will make one greedy. My father has repeated this story to me a few million times. I honestly dread money. I keep no more than Rs. 1,000 in my purse. It is my fear of money that I think perversely drives me to choose things which are unlikely to make much money. I think I will genuinely be mortified if I were to make a lot of money tomorrow. If I [could] trade money for a higher impact, I will always choose that.”

Looking at Badri, I am thinking about what my mother used to tell me. That Lakshmi and Saraswati are actually very jealous of each other. If you choose to flirt with Lakshmi, Saraswati invariably shuns you. But if you proclaim allegiance to Saraswati, Lakshmi usually follows you at a distance. That is pretty much what is happening to Badri Seshadri as New Horizon is all set to become the No.1 among all regional publishers in the country. I want to know what advice he has for the would-be entrepreneurs of the hinterland of India who, one day, could become someone like him. What are the lessons from the outsider?

He replies, “Learn English. Embrace the Internet immediately. Be a voracious reader of all business papers, Internet resources, books. Take huge risks, as you have nothing to lose. If possible, do so, well before your marriage when you are free from encumbrances. Build several ventures; don’t be wedded to one idea. If you reach a level from where your current venture cannot grow much, sell or quit and build the next one.”

Tweets by @forbes_india
How Not to Choke Under Pressure
Podcast: India Inc's Best Kept Secret