Dinesh Himatsingka is a Design Maverick

Textile entrepreneur Dinesh Himatsingka says design matters, for that's what creates added value and the differentiation in the eyes of the customer 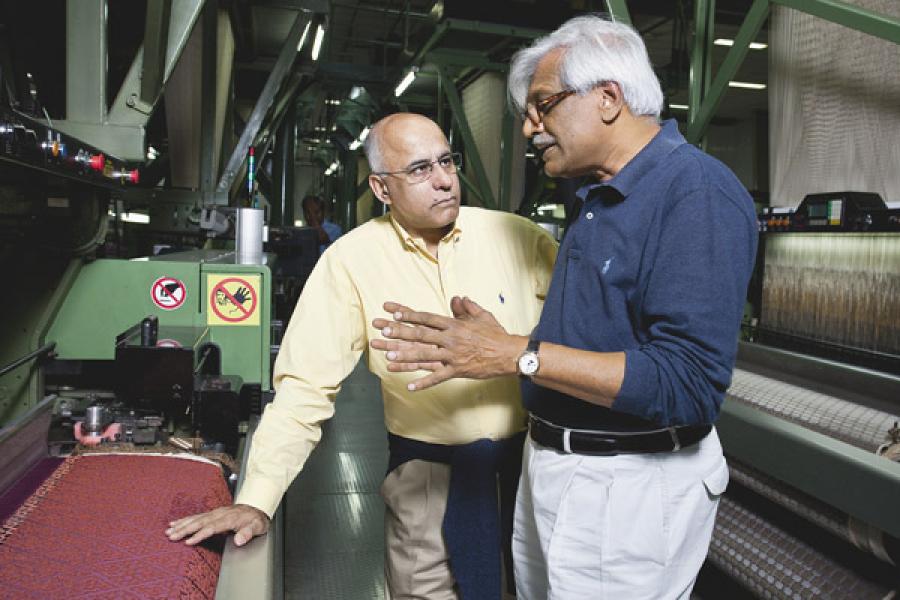 Dinesh Himatsingka
Profile: Founder and Managing Director, Himatsingka Seide
His Insights:
• Design can be appreciated only when we are aware of the idea of beauty
• There is nothing called Indian design. There is only good design. Design has no nationality.

We are driving to Dodaballapur, a little over 40 kilometres beyond the hubbub of Bangalore city’s IT sprawl; the road winds through vineyards and hamlets that will one day give way to ‘development’. For now, it is still serene, basking in the winter sun of early December.

I am in the car with Dinesh Himatsingka, a reticent man in his early sixties. He makes for an unlikely candidate to be India’s leading exporter of high-quality, high-priced drapery to discerning buyers in Europe and the United States. He makes it for the rich and says he’d rather make money off them. His company Himatsingka Seide’s turnover is around Rs. 1,200 crore, but his is not the usual Indian textile exports story. Dinesh Himatsingka is a worshipper of design and in his products the design rules the form.

As we ride the distance, I sense he is somewhat distracted and I probe deeper. It turns out that in faraway Kolkata, his 101-year-old father has been suddenly taken unwell. The man has been a lawyer of great standing, who has appeared in court until just five years ago. I offer to cancel the conversation; we are close to the airport and I suggest he take the flight to be at his father’s side. Dinesh suddenly comes out of his distraction and says, no, his father would not approve of that at all. Let us talk, he says. In that moment, I understand the meaning of work ethic and what makes some of us what we are.

On the paternal side, Dinesh comes from Bhagalpur in Bihar. During his early days and subsequent trips, he was taken by the work of the weavers of that region. In the warp and weft of the artisans, he saw his own passion and also found his pain.

The passion came from an intuitive, unexplainable draw from the thread. The pain emanated from the fact that over and over again, the weavers were repeating the same designs and their artisanship was falling short of art; as long as the buyer, seller, the intermediaries and the workers made some money, no one questioned why design should not question pattern. Dinesh started asking the weavers to weave his designs. Then he took them to his buyers. In 1985, a chance introduction to an Italian architect got him thinking. 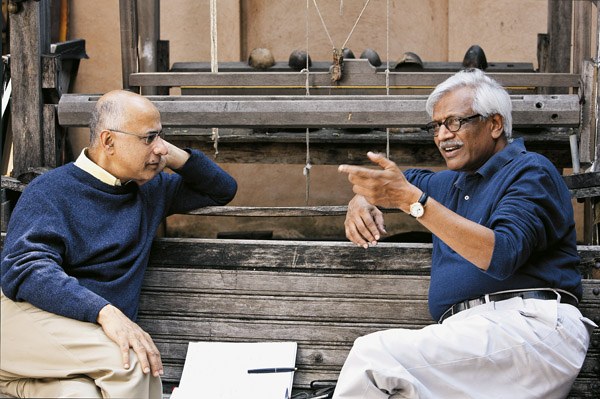 “Westerners have so much beautiful fabric, huge amounts. I asked myself, why can’t we do it? They do not have monopoly on good taste. Let me find out how they do it, I told myself. That is when I realised that it is all about technology and application. You had to apply design through technology. I came back and started building the technology infrastructure to scale-up great design. I was criticised by fellow traders as mad. I told everyone, this is what I want to do and this is what I will do.”

I interject. I have something to tell Dinesh: Two decades ago, I was in front of the Vietnam Memorial in Washington D.C. It is the most visited monument in the United States that lists the 58,195 soldiers who died at war; their names are etched on a granite stone. At the very end, there is a small inscription that acknowledges that the granite was brought from Bangalore, India. For centuries, we have been content with a raw material mindset. We are happy exporting granite, not designing monuments. We are content making silk and not the robe that would be filled by a beautiful body. 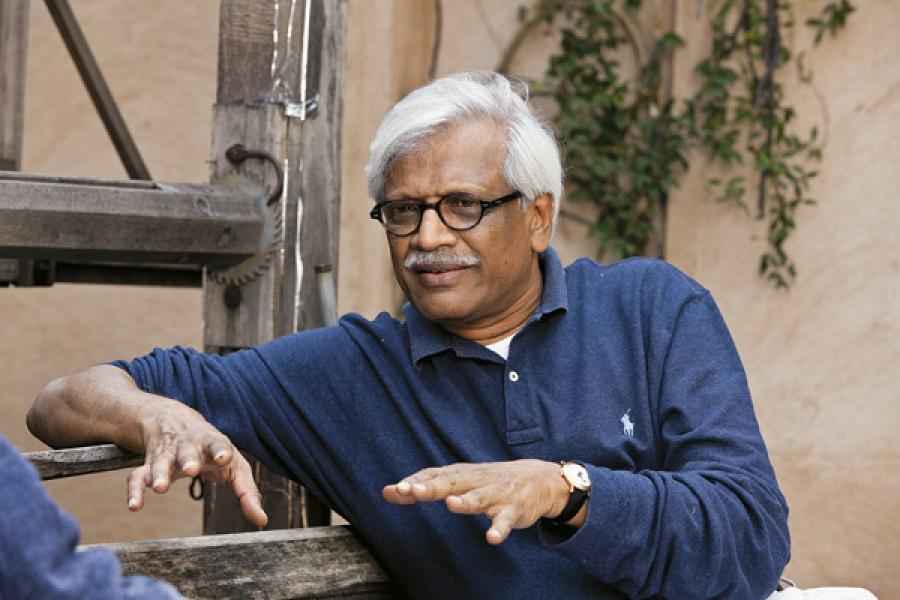 Image: Mallikarjun Katakol for Forbes India
Dinesh agrees: “Design can be appreciated only when we are aware of the idea of beauty. But of course, beauty is the biggest force! We are attracted first and most by beauty. We are hard-wired that way. Physical beauty. Natural beauty. Intellectual beauty. Artistic beauty. Beauty in literature. Scientific beauty. Creative beauty. Beauty of innovations. Beauty through Design. The list goes on. Everything, in my opinion, begins and ends with it!”
Why are we unable to behold the beautiful? Why are we a design-starved nation?

There is a faraway look in his eyes. He is scanning the last few centuries, but he must make sense to me in just a few words. “When you are subservient, you lose design. We have lost the capacity for design, the ability to rise above artisanship, to embrace innovation, because we cling to an irrelevant past. What would have happened to Japan if they had tried to export kimonos? No, Japan did not do that. Japan gave to the world what the world craved; not what Japan knew how to make, from her historic past. We cling to our heritage in a false way. We talk of Indian design. There is nothing called Indian design. There is only good design. Design has no nationality.”
--------
I am seeing what he says. We take the easy path, we repeat the same patterns, whether it is the Sambalpuri saree or the Patola. We do not design for tomorrow. We are fearful of modernity, so we are far behind in design. Nehru’s foresight created the IITs and the IIMs and without industrialisation the post-industrial service-sector boom would not have happened. But what has brought us here, will not take us where we need to go. Just look at the dismal investment in design! In a country of a billion people, there is only one National Institute of Design.

We are making a terrible mistake when it comes to design education, Himatsingka says. India needs nothing short of a design university; something that would take Rs. 400-500 crore of investment into the future.

Himatsingka Seide has gone against the national grain of adaptive behaviour and believes that design is its core and the plants and the machinery, the material and the skills they learn are incidental to it. The added-value and the differentiation in the eyes of the customer are in the design.
He takes me to the shop floor and shows me around. I am fascinated; I want to know how did he envision it all? What did he do right to be where he is, from a turnover of Rs. 1 lakh a year and that was barely two decades ago.

“In hindsight, many aspects may give an impression that I had a clear vision and an approach which distinguished us from others. It was not so. It did not feel that way at all during the journey. The feeling of being lost, confused, attempting this or that was very much there. Nothing seemed right, most of the time.
“So, to answer your question, what did I do right? I am inclined to say — a lot of things went right eventually but at the time of action I was as ignorant and confused as one can be.

“I always took the route I felt comfortable with, whatever came normally to me. This was also the easiest!

“I once read somewhere that in order to succeed, one either has to be the first or the best or the biggest! We eventually became all three in our field, but certainly it is impossible to plan this out; I absolutely did not. If and when it happens, it happens. I am happy it did though, yet don’t quite know why!”

On that note, we are ready to part and I have one last question: Where does he see himself in a decade from now?

The man gently pats the fabric on the loom and says, “Where would I go? I will be here; this is where I belong.”

Tweets by @forbes_india
Wool You, Won’t You?
Ford’s Ecosport: The ‘friendly’ SUV