After having built and nurtured a successful company, how do you know it is time to walk away? Suresh Neotia, a doyen of Indian industry, tells Subroto Bagchi 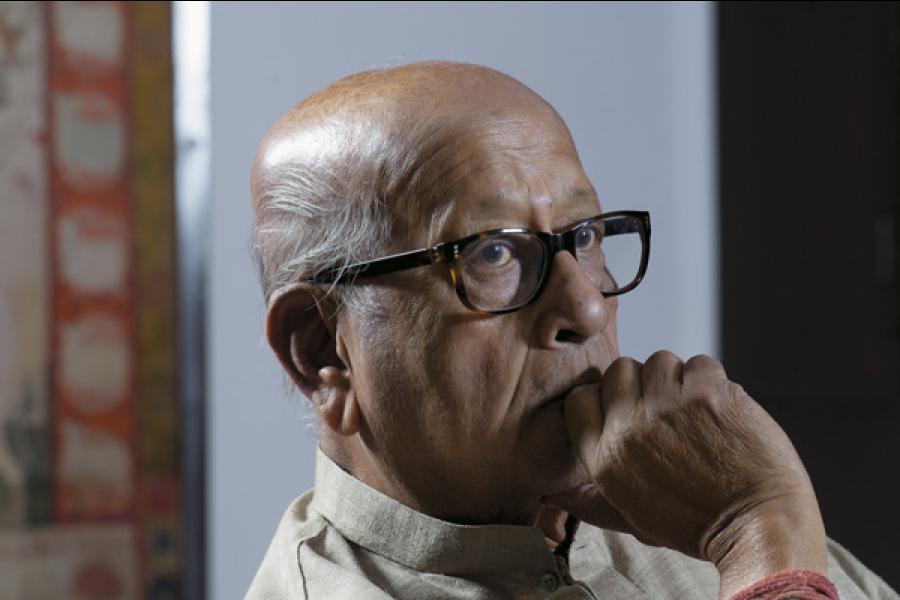 Suresh Neotia
Profile: Co-founder and former chairman of Gujarat Ambuja Cement
He Says: You have to let go, you have to change your life, you have to understand and accept that life will find its own balance.


Three years back, I get a mail from someone who says he reads what I write and could we please meet whenever I am in Delhi and that he would like to invite a few likeminded people to listen to me. The mail ID of the sender has the domain name rkbk.com. I get such mails every so often and really cannot afford the time, partly because I go to Delhi rarely and partly because I have a day job at MindTree. So I politely deflect him.

After a few months, he writes to me again and renews his request. Over the years, he continues to write to me, always a small, personal note and always the same gentle voice of respect and genuineness. It takes me three years to realise that the man is the founding chairman of Gujarat Ambuja Cement, presently in retirement, devoting his time to preserving Indian art and culture, and focussing on many social issues: Suresh Neotia.

I know who I am; a businessman by serendipity and a first generation entrepreneur. Suresh Neotia, on the other hand, has business running in his DNA as he belongs to an old business family; he has never worked for someone else and has gone on to build a large, successful company. And then, finally, he left it all behind. His humility, in pursuing me over the three years, leaves me feeling small.

And then one night, I am dwelling on the issue of letting go; how do people recede with respectability? And how do they know it is time? So, I reach out to Suresh Neotia and ask him to the Zen Garden. But guess what? He declines. This time, I persist.

Finally, last week, as I walk into his house in Greater Kailash in Delhi, I go past the only car in the driveway—a Maruti Swift. I am thinking of its owner whose personal collection of priceless art is often loaned to exhibitions across the world. The car in the driveway could have been a limited edition Silver Ghost or a Bentley. As I cross the foyer, a tall, handsome septuagenarian steps out of the study. I am dwarfed in his presence, in his simplicity and ordinariness. Both are in short supply these days; hence they create a distinctive mark wherever they may live.

“I am a person of average ability. But I realised very early that I can be a good catalyst while somebody else could be the leader. I have never got into a competitive mindset. I had no differences with anyone ever and I have never lost a friend,” Neotia says.

The heightened self-awareness is not born of age. This is a man whose cinematic mind was chronicling each frame as it happened from the time he saw his family lose its coal mines after nationalisation; he watched his father gamble away whatever was left and die at the young age of 50; saw his mother’s devastation when a 13-year-old brother died and then another in the prime of life, leaving a 31-year-old sister-in-law in widowhood.

Amidst all this, Neotia became the emotional heir of two powerful mentors: His uncle HP Poddar, a man whose claim to fame was his taste for great art, in whose home Begum Akhtar stayed for months and in whose heart came and went the queen of Murshidabad. “She was his paramour,” Neotia tells me, in a documentary-like voiceover. The other influence was his maternal uncle, Gopi Kanoria, an incisive man with a photographic memory; unlettered but versatile in all that Valmiki, Kalidasa and later, only much later, Shakespeare wrote. But the man was also a rank miser who pitifully let down his own family.

Influenced by such people, a young Neotia, a commerce and law graduate in his twenties, wanted to be a barrister. But life led him elsewhere, culminating finally in his becoming the co-founder and chairman of the last great “Indian” cement company to eventually become a multinational buy-out. The letting go was an inevitability seeded in a very unusual corner, something I would think would be an extremely difficult, wrenching and dramatic experience.

“No,” he tells me, “the decision to sell was actually quite simple. There was fatigue and there was the unresolvable issue of succession.” 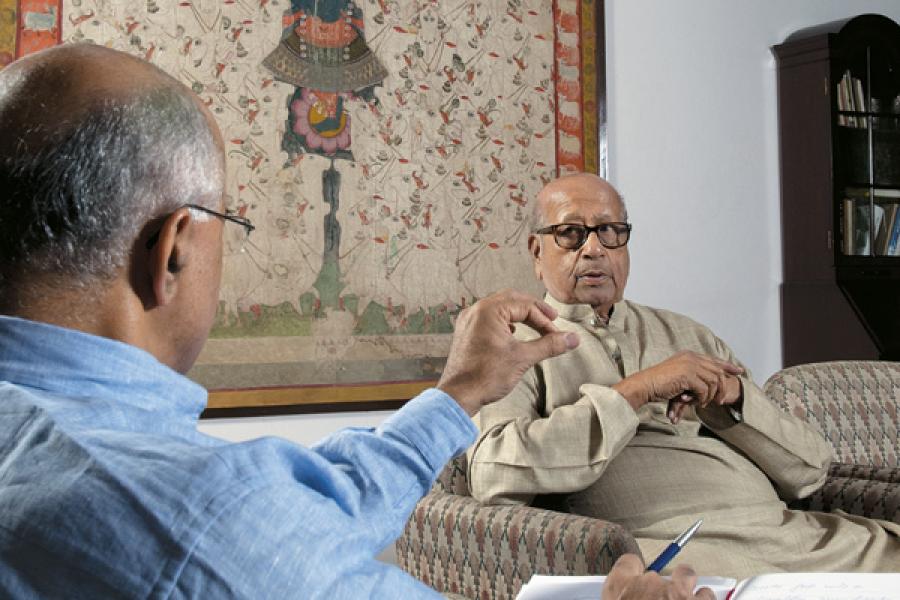 Image: Amit Verma
Neotia’s co-founder and the moving spirit behind Gujarat Ambuja, Narotam Sekhsaria became seriously unwell. At that point, neither Neotia nor Sekhsaria were able to identify a suitable successor within the family. Neotia’s nephew Harsh, based in Kolkata, was extremely talented but clearly did not have the requisite experience to run a nation-wide cement business. And with the Birlas taking over L&T’s cement business, the competitive landscape was all set to change. That’s when Neotia took the pragmatic decision to sell his stake; and Gujarat Ambuja became a part of Holcim.

“You have to let go, you have to change your life, you have to understand and accept that life will find its own balance,” says Neotia.

I understand. The only way perhaps to solve complexity is to embrace the simple truth. But then, it arrives clad in ordinariness. That is why it evades us, I tell myself as I listen to the onetime doyen of the Indian industry.

In his life, Padma Bhushan Suresh Neotia’s selling off his company, his stepping down from chairmanship of the board and then his retirement from the world of business was not the first “let go”. He has similarly let go with silent alacrity, without the world being aware of it, in his personal and his professional life.

I want to reconstruct the man who lives simultaneously in the dhuti-clad Calcutta of Bengali bhadraloks, the eternal ghats of Benares, the solitude of Rishikesh and the banality of Greater Kailash, but I have a rather ruthless, word-counting editor in Sveta Basraon at Forbes India who must confine me in “under 1,200 words” in a three-page spread. She makes sure I cannot ever be Amitav Ghosh or William Dalrymple. Undeterred, I ask Neotia a question that has long haunted me: Why the eastern region, Bengalis in particular, learnt nothing from the entrepreneurial spirit of Marwari businessmen? That intellectual capital could have made the region one of the richest in the world.

“It is not that simple,” he tells me. “The Marwari community is as much to blame. We engaged with the zamindars and clerks. We never engaged with the intellectuals, the thinkers and the academicians.” Thus, over a hundred years, the Marwari community and the Bengali bhadralok forked their path; spaced in between was a landscape of alienation and distrust. In an abject tragedy of economic history, what could have been a fantastic combination of intellectual heritage and business acumen could never be.

Over the last few years, I have come to learn two life lessons. One, you will get all you have wanted, except that some of it will be delivered, not in the size, shape, form or time you wished. Two, you can appreciate and enjoy the best things in life only if you do not seek ownership. It is true as much of love and boardroom power and of course, all things ethereal. 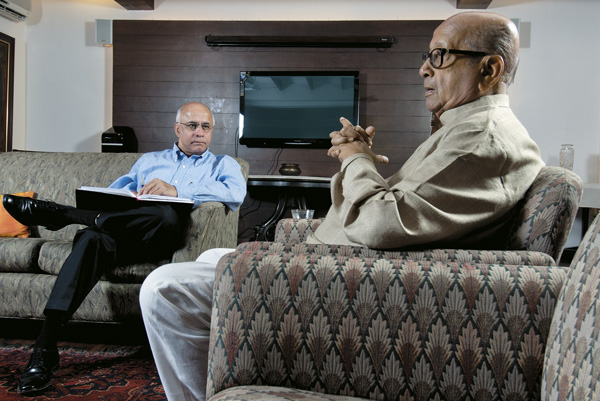 It is time for me to go. I look at the intense man in the winter of his life and I have just one last question. Are there any regrets as the curtain gently falls?

Just one, he says. As you grow older, it is the loss of mentors; it is the sadness of seeing them slowly give up on life. On that point, photographer Amit Verma stops shooting and interjects animatedly, “Is the answer then in choosing a mentor who may sometimes be younger than you?”

“Perhaps,” he replies quietly. I can sense tentativeness in the voice of the 76-year-old Suresh Neotia. It has a temporal strain, akin to the last notes of Begum Akhtar romancing the silk drapes of a Poddar baithak-khana, on a fatigued Calcutta night.


Subroto Bagchi is co-founder & chairman, MindTree and a best-selling author. His brief:  Every fortnight, exchange tales of the road with successful entrepreneurs.

Tweets by @forbes_india
Recognise Fear and Greed on the Stock Market
Snapshots of the Fortnight (June 20 – July 03, 2012)