Ram Shriram is The Weather Forecaster

Venture capitalist Ram Shriram talks about staying grounded, the power of saying no and reading patterns to predict the future 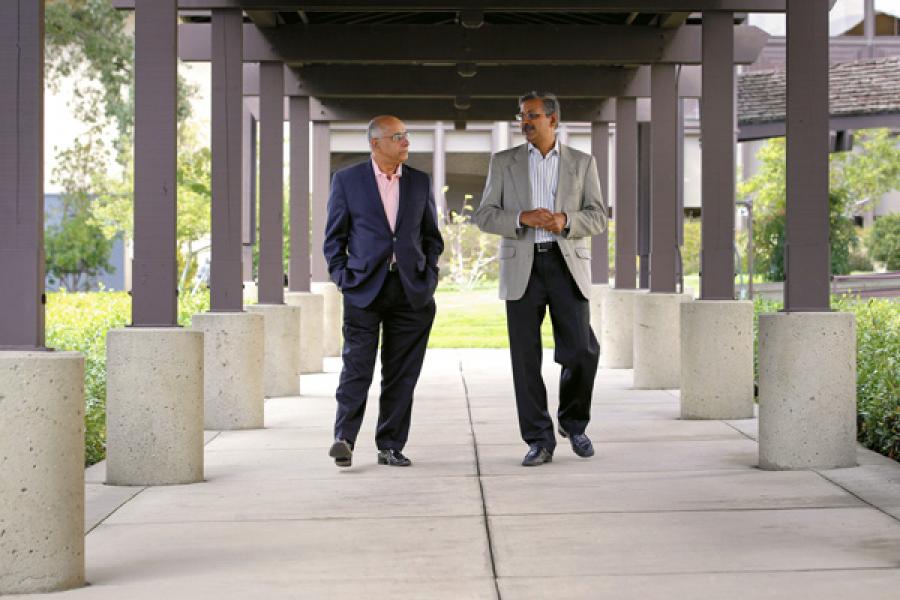 Ram Shriram
Profile: Founding director and board member at Google
Insights:
• You have to accept the reality of where you came from. The moment you lose that, you stop listening, stop thinking and become arrogant. Usually, you see that in successful people.
• People become self-destructive when they become arrogant — they over-reach, become over-ambitious and dominating.

So you don’t know who Ram Shriram is? That is because he’d rather have it that way and prefers you know companies like Netscape, Amazon and Google instead. In the first two, he was a core member of the top management team and in the last, he was the one to  write a cheque for half a million to the two Google founders even as the Google name itself was not settled and no one really knew what a search engine was all about. Today, that investment alone makes him a billionaire angel investor in the Silicon Valley. But Ram Shriram is reticent about his astounding personal success and does not like being in the news.

We are in his office in Palo Alto; non-descript, except for the raw-silk pata painting on the wall, depicting the glory of Jagannath-Balavadra. I want him to tell me about his early life.

“I was born in Bangalore and raised in Chennai. My father passed away when I was three and I am the only child. I was raised by my grandparents as my mother was only 25 then and she went back to continue her higher education and ended up being a professor of English at the University of Madras. My grandparents were middle-class people and they focussed on giving me a good education. I went through a lot of emotional adversity. I saw all my cousins grow up, they had siblings and they had both their parents.

“In a situation like this, you tend to develop a steely determination in order to succeed. There are two ways to [cope] — you could get really despondent and fall off the wagon or you could focus on your goals. As you grow, the goals develop with you. I was fortunate enough to be sufficiently directed by my elders. To this day, I look back on those humble beginnings as actually a privilege because if I didn’t have that, I probably would not have been as driven and as intensely focussed in doing the right thing. But it has also created empathy for those who are in the same position as I was. This allows me to relive those memories and never lose that grounding. 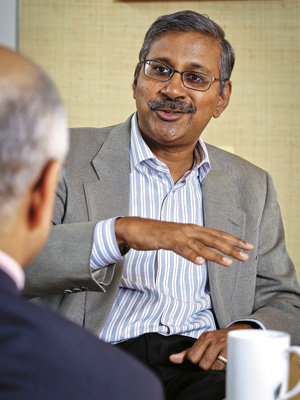 “As you grew up, did you ever have an inkling of what you would grow up to be?”

“At the age of 12, I had wanted to be a weather forecaster. I was fascinated by clouds, the weather. I was brought up in a cocoon of safety and comfort. I was happy. When you are happy, you can be more creative. I think going through school in Chennai was an experience which did not prepare me for what I was doing here but it certainly prepared me in terms of my personal values.

“The values that I brought with me made a lot of difference. Those values were imbibed in me by my grandparents and my mother through their hard work, honesty and no short cuts. My mother was a disciplinarian and she was methodical. She was brutally organised in everything she did. Today, I am like that. So, I got discipline from my mother and affection from my grandparents.”

We shift the topic of conversation. Ram Shriram and I are meeting just a day after Steve Jobs passed away. There is an overhang of sorrow in the Valley. While Ram Shriram was not a personal friend of Jobs’s, they had numerous professional interactions. They came within millimetres of inking a browser deal while Shriram was at Netscape, only to be nixed by rival Microsoft that offered a cash-strapped Jobs $150 million to use its browser. 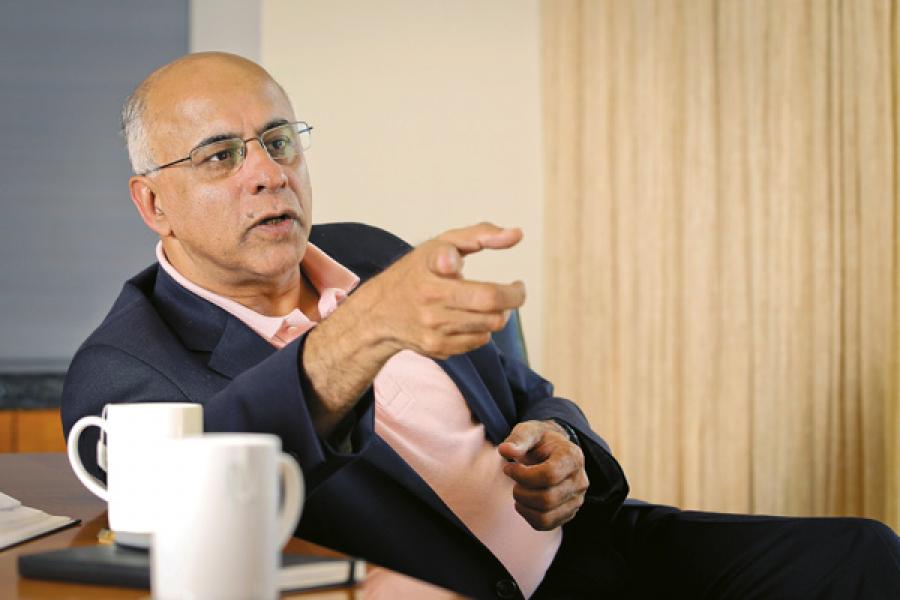 Image: Tony Avelar/ AP Photo for Forbes India
“Steve Jobs was perhaps the most innovative and creative guy of the last 100 years! Nobody else could have had that title. He was unbelievably focussed on what he wanted to do and was very clear about what he didn’t want to do. I haven’t seen that kind of clarity in most managers. As managers, we tend to hedge a little bit. With Steve, there was no question of hedging. He was absolutely sure of himself. It cuts through a lot of things. All of us have difficulty in saying ‘No’. With Steve, he perhaps said ‘No’ more often than he said ‘Yes’ which was one of the most powerful things [about him]! He had the capacity to say ‘No’ often and be right about it! The third thing is he was intensely private! His life was about his work and his family and nothing else.”

Steve Jobs was one of the greatest over-achievers of our times. The world needs more of them, but many go up in flames before they are able to deliver their impact over time. I want to know from Shriram the pathology of self-destruction that is often genetically encoded.

“People become self-destructive when they become arrogant — they over-reach, become over-ambitious and dominating! It could also be a lack of balance when success happens to people too early in life or too easily. You could lose your bearing, your self-awareness, sense of perspective and your ability to stay grounded.

“I am happy that success came to me later in life and fortunate that it came with the ability to introspect. I believe that the best way to be introspective is to remember your past. I think that is important [in order to] have a perspective into the future.”

I am sitting across a man who, as a 12-year-old, wanted to be to be a weather forecaster. He was seeing patterns in celestial movements. The ability to see patterns even before they arrive is what made him invest in Google. Ram Shriram has arrived because he is able to see the future. I want him to tell my readers about some of the defining things that will happen between now and 2020. 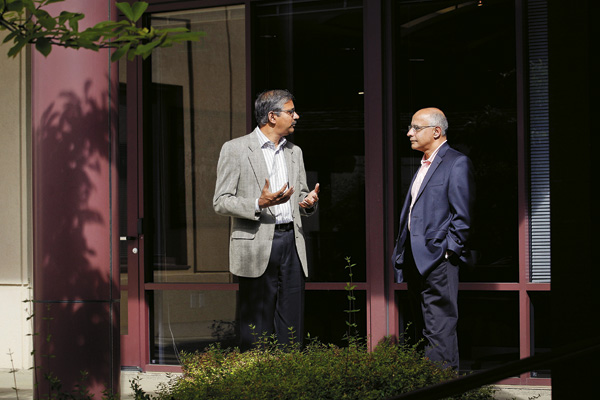 “Well, I think the most defining thing that is going on at the moment is data disrupting businesses and industries. Because data tells the truth and therefore it is brutally efficient. Data, for example, is slicing through bad economics in retail and media distribution. The power of instant information has been a huge benefit to mankind at large.

“Another example of how data is demarcating the world: Stanford is offering an online class this fall and right now they have 130,000 students signed up. It would mean that someone who is sitting in Africa, India, China or anywhere in the world gets an opportunity to enrol into this course at Stanford.
“In the next 10 years, the other thing that is happening is the mobile phone. The coming generation will completely bypass the laptop, the desktops. Tablets will replace laptops and smartphones will rule. Any application that they build on the phone, they are going to build it for a billion people!”

On that rather optimistic note, we bid goodbye to each other. I step into the car-park and then  look up to the sky. The weather looks like it is going to clear up and I do not need an umbrella tonight.