When Sanjay Nayar left Citi to join frontline global private equity (PE) firm KKR in 2009, the world markets were going through turbulent times. But the veteran banker managed to set up KKR’s India franchise brick by brick, crafting a formidable portfolio of investments using his financial acumen and strength at building strong relationships with entrepreneurs. 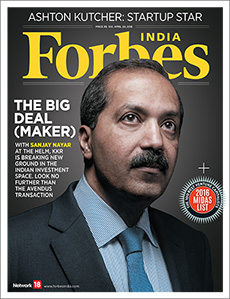 Cut to the present, and Nayar has built KKR into one of the foremost PE players in India, known for innovation in crafting deals and bringing in new thinking in the world of private equity. KKR India is today much more than just a PE player—it has, in fact, positioned itself as a financial superstore across multiple verticals, which include PE, performing corporate credit, performing real estate and special situations and distress. Most importantly, Nayar’s banking background led him to understand that the Indian scenario needed PE players like KKR to innovate beyond pure-play equity. Consequently, KKR India set up a corporate non-banking finance company (NBFC) to serve the debt requirements of Indian entrepreneurs. Last year alone, KKR India’s corporate NBFC undertook financing to the tune of over $1 billion.

Two recent deals have cemented KKR India’s position as a master of the game, including the art of making smart exits despite choppy markets. The Avendus acquisition, where KKR India snapped up the mid-size financial services firm in what was one of the biggest PE investments last year, was an extension of Nayar’s smart strategy to remain ahead through innovation. Apart from its strong investment banking expertise, Avendus is now positioning itself to become a far more broadbased financial services player, getting stronger in areas like wealth- and treasury management. And this ambition works just right for KKR. Nayar’s expertise at striking deals has also been in evidence by way of the recent exit KKR India made from Alliance Tire Group, the Yogesh Mahansaria-led firm it acquired in 2013. In late-March, Yokohama Rubber decided to buy ATG from KKR for $1.2 billion, translating into a 2x return for KKR in less than three years.

In keeping with the focus on smart investors, this issue also carries the definitive Forbes listing of the 100 best venture capitalists, the 2016 Midas List. These are some of the smartest brains in the world of investing, powering many of the planet’s most agile and innovative companies. I would also urge you to read the story on an unlikely tech investing star, actor Ashton Kutcher who, together with Madonna’s manager, Guy Oseary, has been making waves in the world of investing. Some names Kutcher has helped fund: Uber, Airbnb, Skype, Pinterest, Spotify. Need I say more?

Tweets by @forbes_india
Can cinema break the caste barrier in society?
Thoughts on Risk