The secret sauce of smart investing

Those seeking to make money from the stock markets have often been left wondering about the best way, that perfect formula, for success. After all, it’s virtually impossible to predict the market, given the multiplicity of factors which drive its behaviour. However, some of the smartest investors the world over have benefitted from following a few simple ground rules: Keeping it simple, watching out for companies which have comparatively high competitive entry barriers and, most important, good management and corporate governance standards. 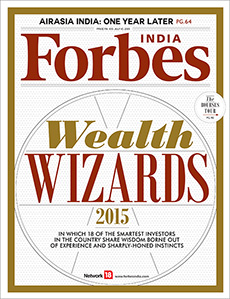 In this special issue, we speak to some of India’s smartest investors to try and understand their investment strategies and what makes them successful. Most of these market mavens say keeping things simple and understanding the obvious pros and cons of companies are the key ingredients to winning at the bourses. Our Wealth Wizards 2015 does not necessarily comprise the biggest or the most recognised names. But the one thing they all are is smart, as evidenced by the way in which they have either invested their own money or managed that of others. From Mohnish Pabrai to value investor Porinju Veliyath, and Rajiv Khanna to Sanjiv Shah, these intelligent investors have gone by what they felt was the simple way to understanding companies and their market behaviour. Sample a few pieces of advice: Pabrai warns against getting other people to do the research for you, while Rajiv Khanna says he follows the philosophy of investing in what he knows. Sukumar Rajah, on the other hand, says cheaper stocks do not necessarily have the best value and says a holistic understanding of a company is the best way out. No rocket science, just some fundamental guiding principles.

This issue also delves into how AirAsia India, the recent entrant to the country’s aviation firmament, is faring a year after the company, led by celebrated entrepreneur Tony Fernandes, launched its India operations amid much fanfare. Assistant Editor Anshul Dhamija writes that it’s not a great report card yet, a fact that the company is well aware of. As Fernandes and the airline’s India head Mittu Chandilya explain, there have been various factors responsible for the lacklustre performance, but they continue to believe in the opportunity that the Indian market provides.

We also get you the story of how Infosys co-founder and former CEO SD Shibulal is carving out an interesting second act around technology entrepreneurs and philanthropy. As Shibulal demonstrates, entrepreneurs never really retire. They figure out something exciting to do all over again.