Winning the fight against stereotypes isn't always easy, but it is a battle worth waging

One of the most meaningless questions in any interview is this: Describe yourself in one word. Candidates scramble for answers and dig out the ones most likely to get them selected. (Obviously.) 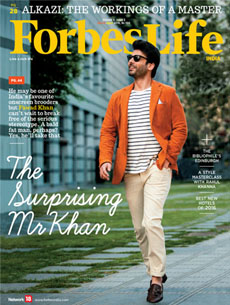 Here’s the thing: People don’t like to be—and are not—easily defined. So to be asked to rely on a word, or five, to articulate who you are is ludicrous. If I call myself sensitive, how will you know that I am tough as well? Of course labels are convenient. At a grocery store or a pharmacy, they can be life-saving. But on people, they become a straitjacket.

It’s the stereotype syndrome. The dreaded little round hole that even square pegs are often forced into, because, as we know, it is convenient.

The man on the cover of this issue of ForbesLife India is doing his damnedest to avoid the hole. Fawad Khan, who has essayed the brooding role of the sexist yet absurdly alluring husband in the Pakistani television dramas, Zindagi Gulzar Hai and Humsafar, has a visible antipathy to the ‘serious’ label. “This is what people misunderstand about me. I am probably just viewed into this one serious pigeonhole,” he tells me. Chary of being trapped by his screen avatar, Fawad is ready to try anything to obliviate that guy’s charm. “I’d love to play a bald, fat man,” he laughs.

His brooding image had spilled off-screen too: India saw a distinctly uncomfortable Fawad during the promotions of his first Bollywood movie, Khoobsurat. But on his second outing with Kapoor & Sons, he is on a mission to “loosen up” and enjoy the carnival. Even chest bumps are not off the table. No one said the fight against the typecasting terror was going to be easy.

Ask Tabu, one of India’s finest actors, who has to wage a similar battle. Her restraint, in movies and in life, has led to her being branded reclusive. She dislikes that word. “Enigmatic?” asks Kunal Purandare, and she is a little happier. The two-time National Award-winner, who has resisted the Bollywood cookie-cutter for most of her career, cannot be reduced to one dimension.

The arts are, in fact, the best place to find these outliers.

Take the great Ebrahim Alkazi. He not only ushered in modernism to Indian theatre, but also moulded some of its leading lights, as you’ll find in the photo essay thoughtfully curated by Madhu Kapparath. (This is from an exhibition on the master organised by his daughter Amal Allana and son-in-law Nissar to commemorate Alkazi’s 90th birthday last year.)

Or Berlin-based illustrator Zack Rock, whose first book Homer Henry Hudson’s Curio Museum has a talking dog as its protagonist—and that isn’t even the most curious thing about it, writes contributor Vaishali Dinakaran.

You will find a running theme in these stories that can be applied to the creative community at large: These artists desperately seek to make their own choices, with no compulsion to resort to type. It is not easily achieved. But even the attempt is worthy of a standing ovation.