Co-founders of Printo, talk about inculcating the idea of customer service among employees 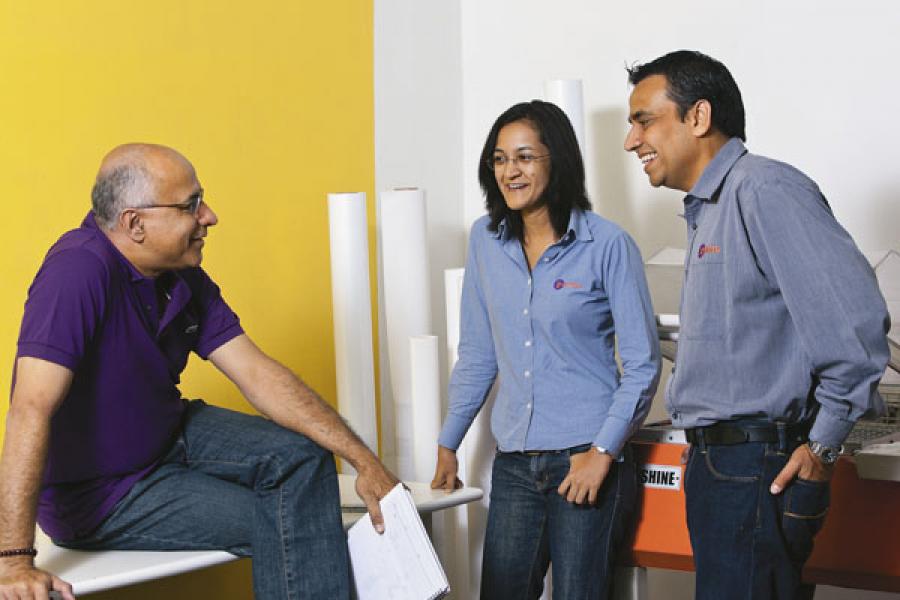 Name: Lalana Zaveri and Manish Sharma
Profile: Co-founders of Printo, a printing solutions company
Their Business Insights:
• Lead by example: Take calls, do deliveries, clean shop windows
• Give customers direct access so that you have your ear to the ground and pick up signals of slip-ups in quality and service Group)

It was a late February evening. I needed to urgently get 31 books copied, printed, collated and spirally bound for my session with a group of 16-year-old students of the National Public School in Bangalore the next day. I had been spending weekends with them discussing the world of business and the next day was my very last session. That afternoon, it occurred to me that giving them a collation of Zen Garden interviews would be a great farewell gift. I spoke to Forbes India Editor Indrajit Gupta and he was okay with the idea. The issue now was execution.

I remembered seeing this new store in the neighbourhood. Printo. So I walked in to find a modern print shop that gives you digitally printed shirts and mugs, and documents, as you wait. I handed over the master set to the smartly attired young sales associate. He said he could do it overnight but the cost turned out to be a sticker shock! I pleaded that this was for a school. He showed me a poster that had a customer response number — it was the director’s number. I punched it in, expecting a dead-end. But Lalana Zaveri, the director, answered in exactly two rings. A short conversation later, she worked out a special pricing that is normally for their employees. The next day, the 31 books made the kids mighty happy and I wanted to know who Lalana Zaveri was.

I researched Printo and was fascinated with the entrepreneurial spirit of Lalana and her husband Manish Sharma. But when I requested her to visit Zen Garden, she was very reluctant. After some cajoling, finally, here I am with the couple.

I am a sucker for the boy-meets-girl story. She was 12 and he was 16 when they first met. She hated him for the first eight years, during which he became a software engineer and she went to study life sciences at St. Xavier’s College in Mumbai. Later, she joined Xerox, learnt selling there, joined her dad’s diamond tools business for some time and eventually went to London to do an MBA. Meanwhile, he joined Rediff.com as their sixth employee, left to build an artificial intelligence product in Chicago, lost the 500,000 dollars he had borrowed, and also landed up in London to do his MBA. Tab we met again. MBA over, he had no job on hand and she was the breadwinner.

“That is when he got pregnant with the idea”, she says.

The two decided to come to Bangalore to set up Printo in 2006. Today, they’ve raised private equity; they employ 218 people and have just opened their sixth store in five years. I want to know how they inculcate the idea of quality and customer service among employees who often come from slums, speak no English and who sometimes leave because someone else is offering them a couple of hundred rupees more. And I want to know what frustrates them most in building something nice in a country like ours. But first, was Manish in love with the idea of printing? Or could it be just any business chosen and executed well?

“I love the idea of interacting with people. I guess Lalana loved the idea of customer service. Besides her printing experience, Lalana also had some retail experience working with two good retail stores in London.”

I look at Lalana for her take now.

“Having been in this business for nearly eight years, Xerox, Comart and Printo included, I actually love the idea of printing. However, before zeroing in on the retail printing concept, we did think of opening a chain of hair-cutting salons or a chain of luxury loos — something we believe Indian highways need. So I think it could be any other business chosen and executed well.”

We shift to the challenge of managing talent.

“I think Lalana and I have taken the non-authoritarian approach of leading by example. So our team finds us doing customer deliveries, taking customer calls, cleaning store windows and toilets. This makes it easier to get them to join in. Those who cannot, opt out.”

“We spend a lot of time with everyone who joins us, emphasising the importance of quality and customer service at every chance we get. We try to lead by example. We give all our customers direct access to us so that we have our ear to the ground and pick any signals of things going wrong on the quality and service front.”

Two beautiful, talented and passionate individuals who have become one through the business they are building. Is this the ideal, equal relationship?

“Lalana is the smarter one. She has a strong intuitive sense about business. She is the one who made us shut stores and reduce revenues to be profitable — something that would take me years to figure out, especially since these stores were not loss-making! She drives business through simple rules like ‘trust the customer, trust the team’. Last year, we brought in Ivo van de Griend, a Dutch chief financial officer [CFO], to help us for a year. Ivo and I shared a personal joke: We spend days working on a new revenue line or another initiative. Then comes the real test: We bounce it off Lalana. If she doesn’t give us an approving nod in the first two minutes, our idea is crap. And we [have been] proved right more than once!”

“Ivo is an amazing man who studied with Manish at Oxford. Five years later, when we met at a reunion, he got to know about our business and decided to visit us for a weekend to see what we do. And then very adventurously and almost impetuously, he offered his services to us. He had worked at GE Finance and Lehman Brothers and I guess this was a good chance for him to test his entrepreneurial skills. He worked with us for a year, brought in some brilliant systems and processes and finally had to leave last month when he realised he needed to make frequent trips to the Netherlands because of his mother’s health. We are now looking for a new CFO. Do you have anyone to recommend?”

Now that last one, my dear readers, is called ‘crowd sourcing’, just in case you do not already know. So, over to you.