Actor Abhay Deol never wanted to do a formula movie. He tells Forbes India what it's like to walk off the beaten track 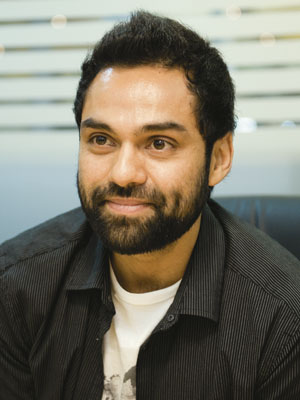 You think you are a saleable star today?
Some people tell me I am. And I would like to believe it. I do get more offers than ever before. More money is offered to me today and also bigger budgets for my films. So I think that means I am saleable.

Though in this industry, it depends on many factors. You could associate yourself with a big producer, big director or a big co-star and you could ride their success along with them. If I wanted my rates to go up then yes all I would have to do is sign up one of those more perceived commercial films with a big name. It’s normal to do that. And it’s the same abroad. It’s how you navigate. But for me personally, since I am sort of an idealist, I take a beating a lot of times.

Tell me something about your growing up years. Were you a risk taker then?
I wouldn’t say I was a risk taker then or now. I would just say that I really go for the things I want. I’ll give it my 110 percent simply because I know that only then I would be able to. If something is forced upon me, then I feel that I would not able to match up to my expectations.

Were you a rebel when you were growing up?
Hmm…You could say that, Yes. (Laughs) I remember that I really wanted to study abroad. And I come from a sheltered background and had protective parents. So to go abroad and study alone was something that most of us were not encouraged to. But I wanted it and I made it happen.

Even when I was gone, everyday they were really worried and at one level they felt I would be back in three months but I was gone for a good 3 years. (Laughs)

When did you decide that you did not want to do mainstream cinema?
Well, I never wanted to do the Bollywood type formula film ever. In fact when I was young I thought I will go straight to Hollywood and I won’t even bother about trying in Bollywood. Obviously then you grow up and you realise that this world is a big place and different cultures come up with different obstacles. I realized later that everything about Bollywood was correct; it was home, my family was here, it was the language I was comfortable working in. So I thought OK then perhaps I should just make a space for myself here as opposed to make a space in a culture that would not probably give me a chance very easily. Try and make a space in my own country and culture where you can start a process.

Did your shift to alternate cinema happen by chance or by design?
It was by design but at a later stage, after my first two movies. I did the first set of movies in an attempt to do a mainstream cinema and experience it and would have gradually moved towards the unconventional space. Luckily for me the first two movies flopped. So I said great, convention is not for me anyways. I might as well just stick to the unconventional stuff. And then onwards I really stuck to it. I said to myself that if anything has to work then it has to be the unconventional one, and if it does not work either then I don’t want to act.

You were studying abroad and aspired to learn direction. Is there more a director in you now or is it the actor? And is there a latent desire to head that way someday?
There’s no director in me, I haven’t directed anything. I think I was very naïve back then. I think was kidding myself, because deep inside I only wanted to act, really to be honest. But I was lying to myself. Today, however, yes I can say that there is a genuine interest in direction. Also, I am more interested in doing production at the moment which I never thought I’ll do. Never.

Have any mainstream producers approached you lately?
Actually yes, in fact it’s not just the first time they have. In the beginning of my career also some of them did. And, don’t get me wrong, it’s not that I don’t want to work with them. I had pre-conceived ideas of what they might be like and what they would expect of me. But now as I have got to know a couple of them some years and some recently, I’ve just totally been bowled over. Even they had a different image about me. Actually I think I’ve been misunderstood a lot. By a lot of people. A lot. And in some very negative ways. It’s only after I meet them that they come to know more about me. And some producers have admitted this.

You mean you are open to experiment a typical Bollywood movie?
Well, yes, because I’ve been experimenting all along till now so why not. Obviously I’ll need to like the script and character but I have nothing against anyone who does mainstream cinema. I am not against Bollywood or formula, what I was against was that there was no alternative earlier. It was like you had to do only this. I’m saying that’s wrong. I mean we should do the Bollywood stuff and its great, but let’s have a choice. So as much as one supports the formula film if people were to support even half that amount to the alternative cinema then we can go so far. Because there are so many actors and directors who can’t and who don’t have it in them to do the Bollywood stuff. I don’t have it in me to be very honest, and I could experiment with it only now. But had I started off doing only the Bollywood stuff then I wouldn’t have been anywhere today.

How sustainable is this kind of cinema that you do?
At the moment I think it’s still on the edge. It can go anywhere right now. We need support. There needs to be more people going out on a limb a little with it. And more often. It’s not like actors don’t do it, they do it once in a while but this needs support for it to sustain itself. ‘Cause it can be out of the door just as easy as it was in. Today hopefully that support will come in and then gradually offbeat can become the mainstream if it gets sustained support for some more time.

There is a chance that you might end up being a niche player?
You say that like a Doctor. (Chuckles). As if you’ve seen my reports! (Laughs)

Does it bother that you might be a lone traveler on this road?
I hate being the lone traveler, don’t get me wrong. I’d like some company. I don’t know, I think anything is possible. Though I am aware of what you are saying. And having that awareness helps. Because then you can do something about it. I am still in a good position today though. I don’t know. Like I said I am an idealist, and so I think the niche will eventually become the mainstream.

You’re hopeful?
I am hopeful. And so, then, being a niche player is great.

(This story appears in the 02 April, 2010 issue of Forbes India. You can buy our tablet version from Magzter.com. To visit our Archives, click here.)