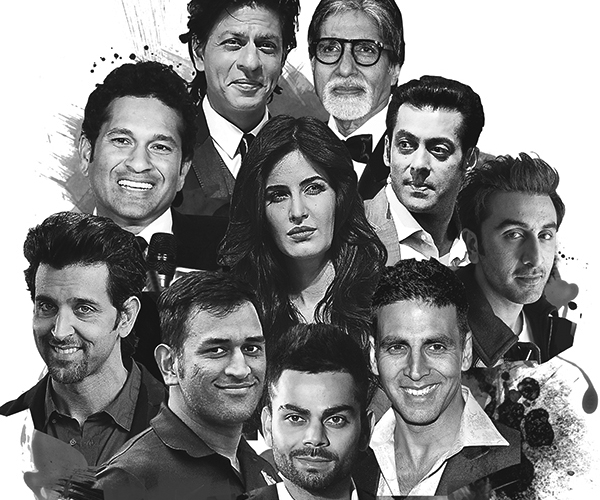 The more things change, the more they stay the same, particularly in Bollywood. Take Shah Rukh Khan, for instance. The actor continues his supremacy on the Forbes India Celebrity 100 list on the back of two successive blockbusters (Jab Tak Hai Jaan and Chennai Express) with his earnings estimated at Rs 220 crore. But, on the fame count alone (one of the two components considered while computing the ranking), Sachin Tendulkar holds the top spot followed by Indian cricket captain MS Dhoni, edging out Bollywood biggies Shah Rukh and Salman Khan to the third and fourth spot, respectively. Cricket is the closest competitor to Bollywood and our fame index is testimony to that. The decision to put Virat Kohli on our cover this time was also motivated by the passion this sport continues to evoke in its fans. Kohli, incidentally, is the youngest celebrity to make it to the top 10 this year.

There have been other changes in the top 10. Kareena Kapoor and Virendra Sehwag make way for Ranbir Kapoor and Hrithik Roshan. Sehwag does not just lose out on the fame count (a drop from 4 to 7), his earnings also fell; Kareena’s earnings eroded by Rs 17 crore, while her fame rank came down to 23 from 13 last year.

In the case of the Rich List, we focus on net worth; the Celebrity 100 list is arrived at by measuring money (earnings) and fame. The list includes movie actors, television stars, sportspersons, authors, film directors, music directors, singers and stand-up comedians. Fame is defined as media visibility in print, television and online plus social media power; this is measured by looking at each celebrity’s presence on Facebook and Twitter. Their gross pre-tax earnings are combined with their fame scores to arrive at the final ranking.

Film stars might do television for extra money and popularity, but the numbers reveal that it does not determine their fortune. Salman Khan, Akshay Kumar as well as Amitabh Bachchan were involved with TV shows this year. However, Shah Rukh Khan’s singular focus on what he does best—films and entertainment—ensured his place at the top.

The total earnings estimate of the 100 celebrities on our list is about Rs 2,622 crore, of which the top 10 together earn Rs 1,145 crore (43 percent). Twenty-four new faces enter the list this year. Notable names among the dropouts are Mary Kom, Boman Irani, Ajit Kumar, Viswanathan Anand and Junior NTR.

Dhoni has earned the highest amount (Rs 141 crore) from his 23 endorsement deals, while Shah Rukh Khan’s 19 contracts in our time period fetched him Rs 133 crore.

AR Rahman continues to top the social media rank, with an astounding 15.1 million Facebook fans and 3.3 million Twitter followers. Clearly, he can teach a thing or two to our celebrities on how to engage with fans online.

What has emerged from the many interactions we had with the Bollywood fraternity is the trend of interchanging roles between actors, directors and producers. Many actors have turned producers, while directors like Farhan Akhtar don multiple hats of actor, producer and even script writer. Leading film actors like Salman Khan and Amitabh Bachchan appear regularly on television shows. Karan Johar, apart from directing and producing films, also anchors a TV show (Koffee with Karan), judges reality shows and is a popular anchor for film award functions. With celebrities comfortably changing media platforms and roles, some use it to market themselves and cross-promote their films while others have made it an integral part of their careers.

In another shift, there are fewer women on the list this year, down from 29 last year to 21. Of the 29 from our 2012 list, 10 no longer feature; meanwhile, there are two new entrants in Sridevi and Parineeti Chopra.

On the wealth count we notice a significant increase in the earnings for music director Pritam; his estimates have jumped by Rs 43.5 crore (a staggering 416 percent gain). This came on the back of the six movies and 50-plus concerts. Bachchan has seen the second highest increase in earnings with a growth of Rs 31 crore; his fame rank has also moved three notches higher from 8 to 5.