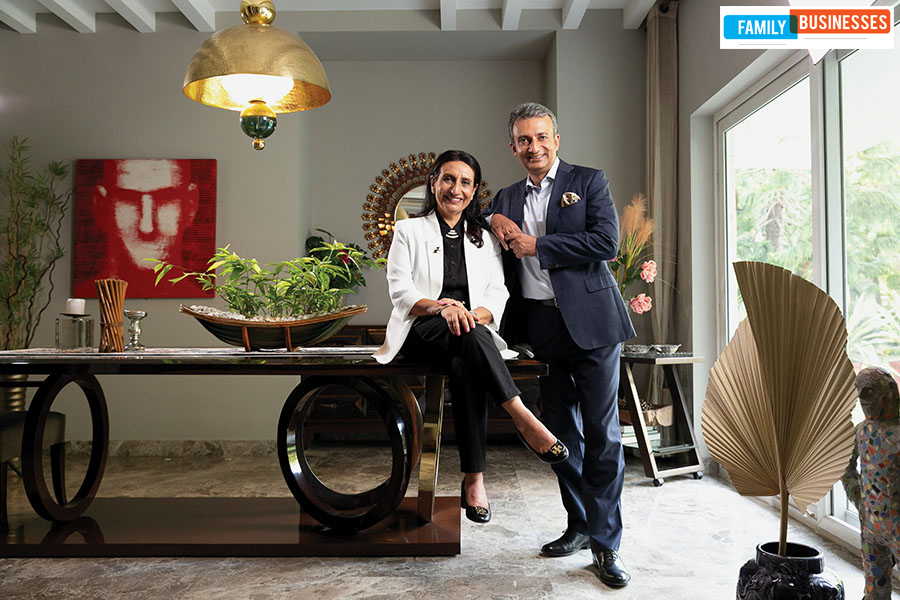 The Asian Games were about to start in November. The capital city was humming with excitement, the stakeholders were immersed in intense last-minute preparations, and Delhi was getting ready to play host to thousands of guests from across the world. Rashmi Ahuja, too, was engrossed with her game plan. A primary school teacher and mother of two, the 25-year-old had chanced upon a newspaper advertisement on a placid Sunday morning at her double-storeyed house in south Delhi.

A ‘bed and breakfast’ commercial triggered an idea. Rashmi, who had got married at 19, wanted to turn entrepreneur. “The word entrepreneur didn’t even exist in the 80s,” she says. After having completed her graduation from Delhi University and three years of teaching at one of the top schools, she decided to explore something new. “I loved teaching, but I didn’t find it exciting,” recounts the 66-year-old who has been making grand plans to retire from active business life for over the last decade or so. “It’s all lies. She still runs the show,” says her son Jaideep.

Meanwhile, back in 1982, Rashmi had spotted something exciting. Next, an affectionate daughter-in-law went to her doting father-in-law to discuss the idea. “Papaji,” she implored, “can you please give me the first floor for my business?” The young woman was playing her cards well. She knew that the apartment, which was occupied by officials of a foreign embassy, had been lying vacant for over a month. So she stood a bright chance. There was a glitch, though. Her father- in-law, a big contractor and a wealthy man, was also a ‘great miser’. “Sure, why not? But how much rent would you pay?” he asked. 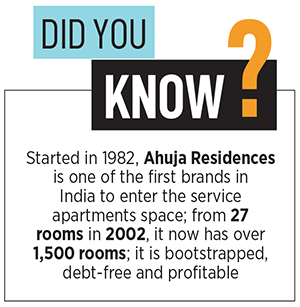 Rashmi was aghast. She didn’t have money and reached out to her bureaucrat-husband. There was emotional support, not financial. “You are free to do whatever you want, but I don’t have money,” he said. So, she went back to her father-in-law with another request: “Papaji, can you lend me ₹5,000?” The old man didn’t disappoint. “Sure, why not? But you will have to pay interest,” he replied. After hectic parleys and persuasion, both reached a common ground. For the first three months, Ahuja got the first floor and ₹5,000 for zero rent and zero interest.

The Games concluded and Rashmi’s ‘The Residency’ made enough money in one quarter to clear her dues. Her mother and in-laws promised to take care of her four-year-old boy and a six-month-old girl so that she could focus on her nascent business. An elated father-in-law became more than a willing partner in fuelling the venture with money, labour and encouragement. “Whenever he gave money, he stressed it’s a loan, and I paid back every time,” says Rashmi, the founder and chairperson of Ahuja Residences, a corporate housing and serviced apartments brand. “I am Rashmi and not Mrs Ahuja,” says the spirited entrepreneur who fiercely defends her independence and identity. Her name, she underlines, is not pinned with anybody. “I am for what I have done,” she says.

In fact, the brand name ‘Ahuja Residences,’ happened by default. The mother-son duo couldn’t get the website registration for ‘The Residency.’ “Being an incredibly talented bunch of people,” says Jaideep with a laugh, “we decided to go for Ahuja Residences.” 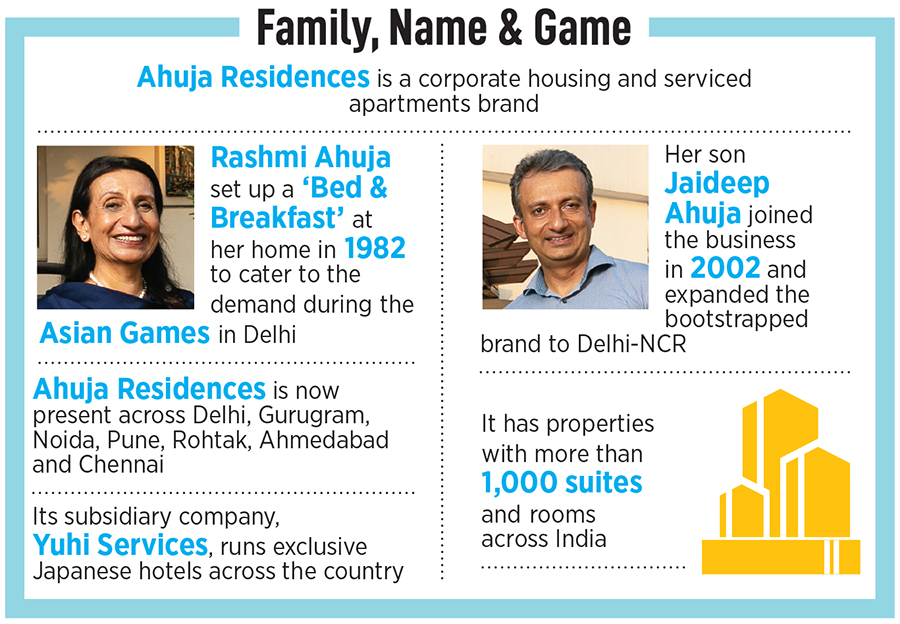 The name was changed in 2002, the year Jaideep joined the business. A London School of Economics graduate, he had worked with Accenture for four years. In 2002, Ahuja Residences was confined to Delhi and had seven properties and 27 rooms. “My mom decided that she would not go beyond 5 km of her house,” says Jaideep, explaining the constricted reach of the brand during the first two decades. There was another reason behind the excruciatingly slow expansion. The business model built by Rashmi had only one way of expansion: Owning the property. “Back then, this was the only way I knew to invest,” she says.

Fast forward to 2022, Ahuja Residences is spread across 16 locations, including Delhi, Gurugram, Noida, Pune, Rohtak, Ahmedabad and Chennai, and has over 1,500 rooms. The bootstrapped brand has rolled out a premium boutique hotel in Gurugram—AIR by Ahuja Residences—and also runs suite-only brand AR Suites. A subsidiary company, Yuhi Hospitality Services, runs exclusive Japanese hotels across the country and operates facilities in Gurugram, Rohtak, Hoshiarpur and Sri City. The four-decade-old brand posted an operating revenue of ₹67.15 crore in FY22, a fall from a high of ₹88.09 crore in FY20. “We are very conservative when it comes to spending money. That’s why we survived the pandemic,” smiles Jaideep, who never wanted to join the family business. 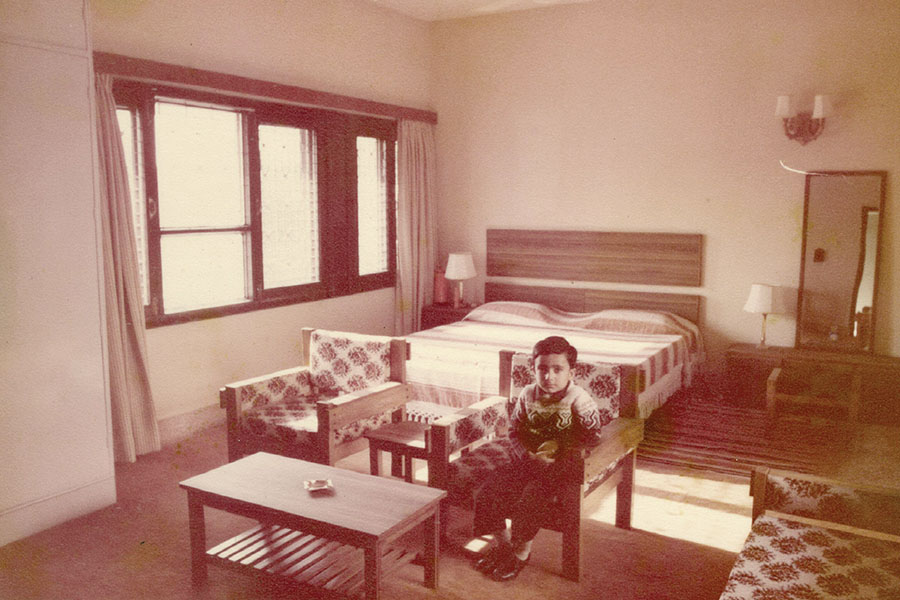 Call it the curse of a consultant life, Jaideep was frustrated with his job after four years. The reason was simple. As a professional, he would spend hours making reports, writing suggestions and preparing blueprints for companies. But he had no control over execution, which was pathetic most of the time. “A consultant’s job comes with this limitation,” he says. Then came 9/11, which was followed by a turmoil in the global economy and a series of layoffs.

Back in India, Accenture too followed suit. There was also a one-year sabbatical scheme, where employees could get 20 percent of their pay and were asked to join back after a year. Jaideep opted for it and finally joined the family business. “I could see the demand and we struggled with supply,” says the 45-year-old managing director and CEO of Ahuja Residences. The second-gen entrepreneur transitioned the business model from owning to leasing properties, went deeper into his relationship with corporates by catering to their needs of service apartments and spread the brand outside Delhi.

After four decades of existence and an annual revenue run-rate of over ₹100 crore, is he happy with the pace? Has the brand been too slow in its progress compared to a bunch of hyper-aggressive hospitality startups like Oyo and the likes? Jaideep offers two perspectives. For a brand that has not taken any private equity or venture capital money, is debt-free, and started to press on the accelerator only after 2005, the profitable growth journey has been satisfactory. Second, the mother-son team made a conscious choice to go ‘slow and steady’ rather than be ‘fast and furious’ by hitting the bumpy road to funding and valuation. “We are very clear that we would never attach our brand with anything that is not 100 percent controlled by us,” says Jaideep. His wife, Kanika, too has been part of the family business, taking care of the design aspects of all the properties.

While praising startups for expanding the hospitality space, Jaideep underlines that most of the newbies paid a heavy price in terms of either shutting down or diluting the quality. “Hospitality is not an easy game,” he reckons. If only free Wi-Fi, free breakfast and clean sheets would change the game, he points out, then anybody and everybody would have cracked the code. “For us, every property has to be better than the previous ones,” he adds, sharing how his business style differs from that of his mother. “She has a nose for business,” he says. “In 30 seconds, she can tell whether the location of a particular property will work or not. And she rarely goes wrong.”

Jaideep, on the other hand, is more process-driven. He would make business plans, create investment models, figure out the best and worst-case scenarios, do number crunching and focus a lot on research. Rashmi points out another trait. “He has a higher risk-taking appetite,” she says, adding that at times, there is divergence in thinking, but it’s amicably resolved. “Earlier I used to run the ship, but now my son is the captain,” she says. Her role, she underlines, is to keep cheering the captain and flag him if he is running too fast.

Ahuja Residences, reckon marketing and branding experts, is a classic case of family businesses being run in an old-school manner. “Contentment is the name of the game,” says Ashita Aggarwal, marketing professor at SP Jain Institute of Management and Research. “The Ahujas have not bitten off more than what they could chew,” she says, adding that the family knows its limitations and has played to its strength. Their biggest plus was resisting the temptation to take on well-funded and much younger startup rivals. “Running a profitable and debt-free business is not a joke,” she says. Though lean revenue is definitely not pleasing to the eyes of outsiders, surviving in a business for four decades is no mean achievement.

Rashmi, for her part, is happy with the report card of Ahuja Residences and is confident of a bright future. “The captain will take care of the ship,” she says with a smile.