Respecting the family charter, valuing a risk-and-reward approach and adding a fair share of professionals have made the 40-year-old Synthite Group roar in the world of spices and oleoresins 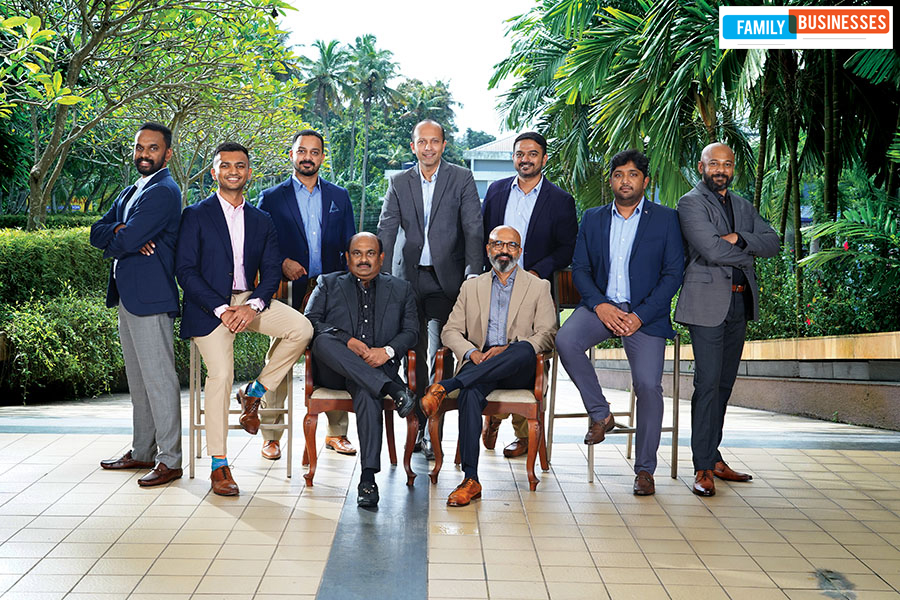 Aju Jacob starts the conversation by giving a simplified lowdown on the flavour of his family business. “If you crush black pepper in your hands, you get an aroma,” explains the chemical engineer who joined Synthite Industries in 1987, a year after graduating. His father, CV Jacob, started Synthite in 1972 by extracting oil and resin from spices such as pepper. The aroma is due to the evaporation of the volatile essential oil, which is derived by crushing pepper. “It’s aromatic and has a slightly musty odour,” says the 57-year-old joint managing director of Synthite Group, who has spent over three-and-a-half decades in the business.

Once the oil has been extracted, Aju continues, one can get resin as well. “Oil gives you aroma, and resin gives you taste. You combine both, and it’s oleoresin,” underlines Aju, adding that Synthite Group is India’s largest producer and exporter of spice oils and oleoresins. “You take the same pepper and bite it, you get pungency,” he smiles, highlighting a more caustic aspect of the business of spices.

The second generation entrepreneur, for sure, was enjoying the heady aroma of the family business. In 1987, Aju was 22, Synthite had a turnover of ₹6 crore and was processing around 300 tonnes of chillies a year, and the founder had diligently built up a sizeable export empire that included outposts like the US. Aju spent the first two years on the shop floor learning the essential ingredients of production and the business. Towards the end of 1988, he went on his first overseas business trip to Europe for about seven weeks. “That was a great experience and exposure,” he recounts. The young lad, for sure, had quickly developed a taste for spices. 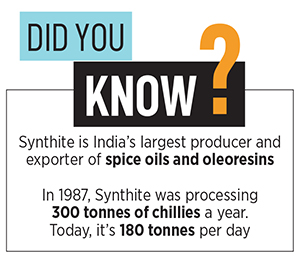 Four years later, in 1992, Aju discovered another facet of spices: Pungency. Spain, which till the late 1980s was the paprika capital of the world, was losing its competitive edge and India was fast filling the gap for the spice made from dried and ground red peppers. Synthite, which was at the forefront of making the most of the global opportunity, was struggling to meet a sudden spike in burgeoning demand. Aju rented a factory which had its share of labour issues and was locked down.

The young entrepreneur resolved the issues, opened the plant and started production. All went well for six months. After that the owner of the factory went bankrupt, and Aju decided to buy it. So far, Synthite had been processing only one product at the plant. After acquisition, Aju reasoned, the plant could be beefed up to function as a multi-product factory. Though the move made sense, it was a risky bet by the young entrepreneur who was trying to find a place for himself in the family hierarchy.

After a few months, Aju realised the blunder. The factory lacked the tech capabilities to extract other products. Consequently, the export batches started getting rejected, stocks piled up and all attempts to fix the issue came a cropper. A dejected Aju came under immense pressure as the audacious move bombed. His dad came to his rescue. “If your fingers get rotten, you must chop them to save the hand,” Jacob shared some words of wisdom. Half measures, he underlined, won’t work. Aju got the message and replaced the faulty extractors with new ones. It worked. 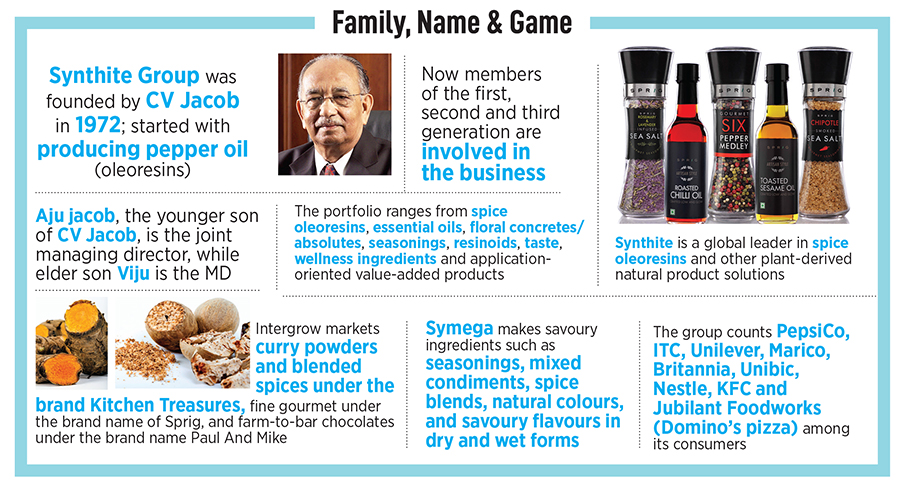 Two decades later, in 2011, Aju was dealing with another ‘pungent’ moment in his life. But this time, it was trial by fire. The 46-year-old was pursuing an executive MBA from Indian School of Business, and one of his batchmates happened to work on a part-time basis for Synthite’s project in China. The outsider performed well and was soon hired as operations head. Aju was excited for the new recruit, but there was one problem. The post of operations’ head had been held by Aju for 25 long years. “It was tough for me to give up. I thought I was the best guy for the role,” he recounts.

Aju, in fact, had played his role admirably in taking the revenue of Synthite Group from ₹6 crore in 1987 to ₹750 crore in 2011. His cousin George Paul, who was then the managing director, was scripting a new chapter in the life of the company by pitching for an equal role for family and professionals. “The transition was not easy for me to digest,” he recounts, adding his office cabin too was occupied by the newcomer. Aju had to get used to a new reality.

Next year, it was churn time for the family. The third generation was being drafted in a haphazard manner, and it had the potential to upset the apple cart. “This had its own issues,” recalls Aju. In the larger interest of the family, and the business, the members decided to rope in a family business coach in 2012. The idea was to create a sustainable structure within the organisation and frame a blueprint for the future. For six months, the coach closely worked with the family members, understood and monitored the functional and emotional dynamics, observed how the board operated and stayed in touch with the senior management.

The outcome was a ‘Blue Book’. It is a charter or a constitution which not only comprehensively outlines and delineates the roles and responsibilities but also irons out all potential points of friction among family members. It has some unique and first-of-its-kind features as well. Take, for instance, the rule regarding lateral hiring. While the family members who are postgraduates and have work experience outside the family are allowed a lateral entry into the organisation, the undergrads are required to undergo requisite training before induction. “Once there are rules, you become conscious about it,” says Aju, underlining the importance of having a written document. Though it’s not always that the family sticks to every word in the book, having a code is a huge blessing. “All of us know that there’s a line and the Lakshmana Rekha can’t be crossed,” he underlines.

There is another fascinating aspect about the way the book has been structured. The roles played by the members decide their salaries and positions. This kills all possibilities of letting nepotism and favouritism creep into the working of the business. Any individual taking initiative in starting or leading a new venture or vertical is rewarded more than others. “Risk and reward is clearly articulated in the constitution,” says Aju, who moved out of regular operations and slipped into strategic roles in product development and projects.

Fast forward to 2022. As the Blue Book completes a decade of its existence, the 40-year-old Synthite Group finds itself highly revitalised. The business has soared at an incredible pace: From ₹1,100 crore in 2013 to ₹2,817.88 crore in FY22, it has expanded its overseas reach and beefed up its domestic play, the third generation is getting ready to make bolder moves such as exploring the cannabis market in Canada, and from predominantly a B2B player, Synthite Group has taken rapid strides to grow its B2C business. 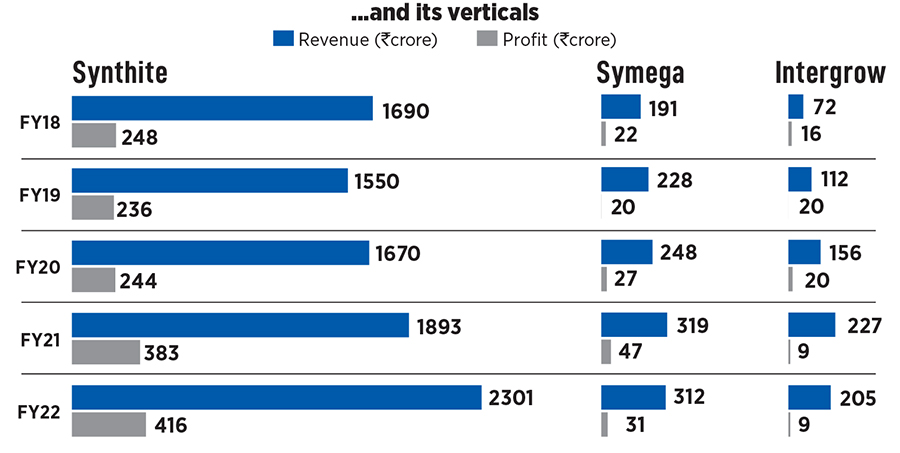 In fact, the three business verticals have been firing on all cylinders. While Synthite is a global leader in spice oleoresins and other plant-derived natural product solutions, Symega makes savoury ingredients such as seasonings, mixed condiments, spice blends, natural colours, and savoury flavours in dry and wet forms. In fact, there is a pinch of Symega behind a bunch of popular brands. Aju shares the secret. Take, for instance, ITC’s Yippee noodles. The ‘masala’ sachet that comes with it has a mix of spice extracts, spices, salt, and other functional ingredients. “This is put together by Symega,” he says.

Then there is PepsiCo’s extruded snacks brand Kurkure. The dusting of flavour is again by the group. “Hellmann’s sauce from HUL is flavoured, processed and packed by us,” says Aju. And if you enjoy the spicy taste of Red Label Natural, the tea brand gets all the ingredients from the group. “Just like an Intel inside a computer, Synthite spice extracts are inside a lot of processed foods available in the market,” says Aju with a smile. As far as B2C brands are concerned, there are a bunch of interesting names. Intergrow Brands, a sister concern of Synthite, markets curry powders and blended spices under the brand ‘Kitchen Treasures’; gourmet offerings come under ‘Sprig’,  and the farm-to-bar chocolates’ brand is ‘Paul and Mike.’

Synthite Group, reckon industry experts, is reaping the rewards of staying ahead of the curve by investing heavily in technology, products and brands. “Moving up the value chain, they created Symega, which focussed on developing value-added solutions across different segments in food and beverages,” contends KS Narayanan, a food and beverage expert. “Today many market-leading FMCG brands sport a ‘Symega Inside’ solution,” he says. The group, he lets on, invested heavily in back-end agri sourcing, technology, and set up manufacturing and sales operations across China, EU, US, Brazil, Vietnam and Sri Lanka.

Interestingly, everything that the group touched didn’t turn into gold. Take, for instance, its move to enter the personal care category by rolling out soaps and hair oils under the brands Vieda and Nuvo. After staying on course for a year-and-a-half, the venture lost steam and had to be folded. “Our hunt for the right private equity partners didn’t work,” says Aju. Building a consumer brand, he lets on, takes loads of investment, patience and an ability to stay unflustered in spite of the initial phase of mandatory losses. “We already had other brands and thought that we should not spread ourselves too thin,” he says, adding that the experiment was an interesting learning. “Sometimes, I call myself a failure director. All failures are with me,” he laughs. At times, things don’t work out, he adds.

Aju, though, is immensely satisfied with the flavour and aroma of the success that the group has had over four decades. There have not been many failed bets. And even the ones that failed, were smaller in nature and not too spicy to digest. Ask him the secret ingredient behind the success of a family business, and he quickly answers in two words: Blue Book.