Starting as a grocery shop in Rajasthan, the third generation of the Agarwals is now doing its bit to modernise the brand 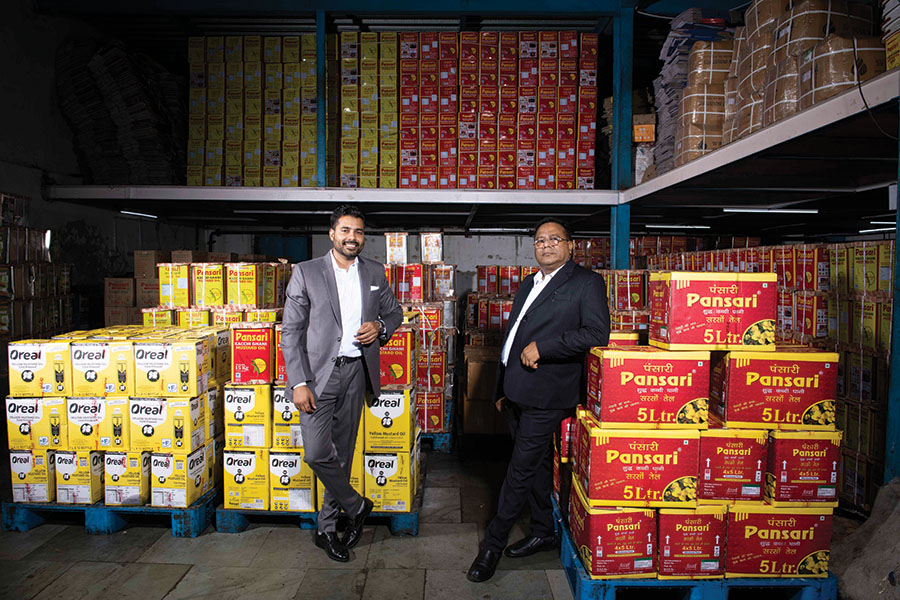 2011, New Delhi. Shammi Agarwal found himself on slippery ground. The third-generation entrepreneur, who joined the family business of bulk trading and retailing of mustard oil in 2011, was making a serious pitch to push the Pansari Group into branded play. “Tum log tel becho, brand nahin bech paaoge (you guys sell oil, you won’t be able to sell brand),” was the initial pushback from big retailers in Delhi-NCR. The 25-year-old had rolled out the Pansari-branded mustard oil and expected a decent traction if not an outright blockbuster. And why shouldn’t he? He was coming from a family business, which traced its roots to 1940s when his grandfather opened a small grocery store in Poata, Rajasthan. The shop was named ‘Pansari ki dukaan’.

Over the next few years, the Agarwals grew their clout. Shammi’s grandfather shifted to Kolkata in the 1960s, and gradually dabbled into the business of wholesale trading of mustard and sesame seeds. In the early 80s, the family had a huge financial setback when its sesame seed business collapsed. Excessive rains damaged the crop, supply tumbled thereafter and the family realised the risk of trading in seeds. From seeds, they moved onto the business of edible oil. Shammi’s father Kamal relocated to Delhi, took a factory on rent and started manufacturing mustard oil. There was still no brand as the B2B business focussed on wholesale trading and contract manufacturing.

Back in 2011, Shammi was going B2C. The young man ticked all the boxes before taking the plunge. He had the financial muscle, possessed the retail clout, and had grand plans to make a dent in the mustard oil market. The group had clocked ₹180 crore in revenue in FY11, and the family backed the move. The response from traders, though, was negative. “Kaisa brand naam hai (what kind of a brand name is this)?” was the feedback. In a market dominated by biggies such as Fortune, Shammi’s Pansari didn’t stand any chance. However, he persisted with his efforts. The production was ramped up, the brand reached out to small retailers who were not entertained by the big brands and the sales team was beefed up to connect with thousands of kiranas across the state. 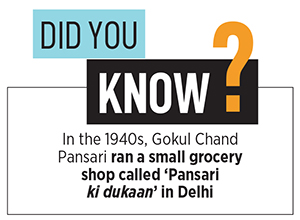 There was success. Sales increased, reach widened and the young entrepreneur saw room for a wider play. Soon, however, the business of oil slipped into turmoil. Though sales picked up, Shammi forgot he was playing a credit game. Lots of traders, big and small, took supplies and didn’t pay. Then there was a problem within the sales team. Some of the officials collected money from the market and disappeared. The company had to take a hit of over a crore.

Swords were out in the family, and outside. Shammi was criticised for his costly blunder, and there was a strong voice favouring sticking to the core business of B2B. The senior management, though, supported the young lad. “Don’t worry about the losses. Stay focussed and keep trying,” was the message from his father. His uncle, too, encouraged him to keep the risk appetite intact. “There are no failures. It’s always learning,” he said. 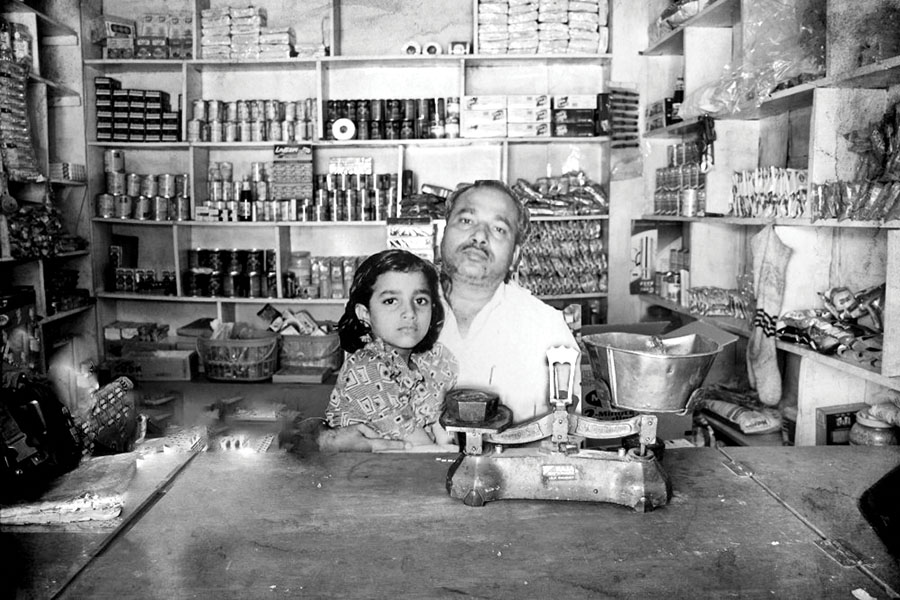 Shammi Agarwal’s grandfather inside their grocery store in the 1980s

Shammi went back to the drawing board, started hiring more professionals and directed the team to focus more on smaller towns and cities. The idea was to establish a foothold across the remote outposts and then move towards the capital. For the first five years, the focus was on branded mustard oil.

“The plan was to make one branded product stand out,” he says. Once the goal was achieved, he started adding more products under Pansari brand from 2017 onwards. Refined vegetable oil, rice, flour, spices and cereals started sporting the Pansari tag. While retailers were lured with hefty margins, consumers were wooed with a wide assortment of high-quality products at prices cheaper than the rivals. 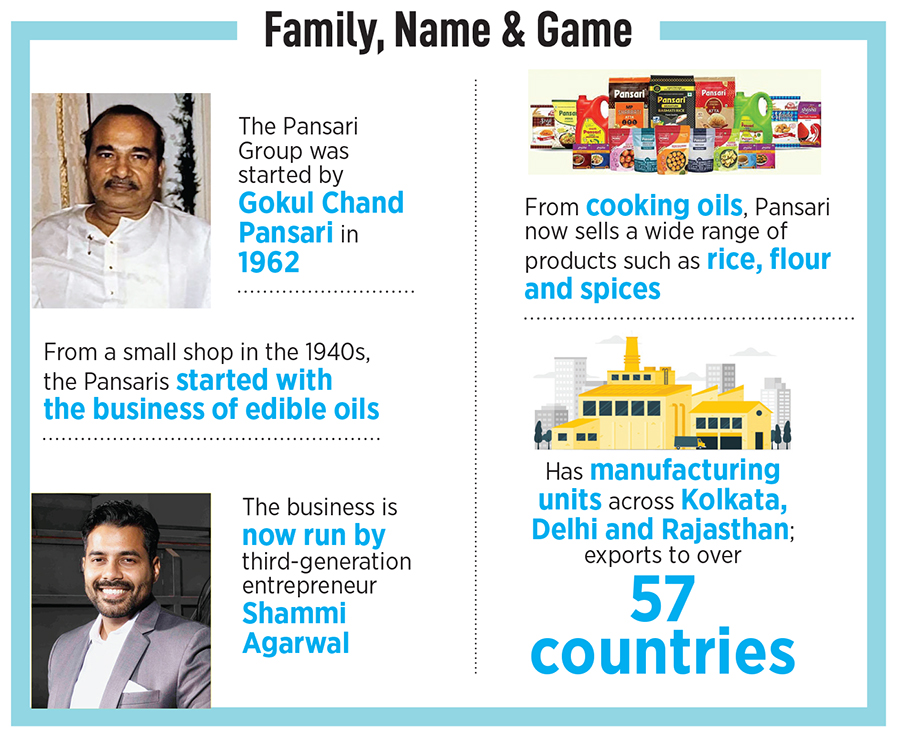 The strategy seems to be paying off for now. Sales have increased. From ₹473 crore in revenue in FY17, the numbers have jumped to ₹1,005 crore in FY22. The group has now ventured into the hotels and restaurant segment and provides dry seasoning, and soon will get into sauces and liquid condiments.

What is most satisfying for Shammi, though, is the data that he flashes to show the transition that he has managed to achieve in the group. The Pansari Group, he claims, manufactures around 200 tonnes of mustard oil every day. “Out of it, 60 tonnes is branded play,” he contends, adding that branded rice sells around 1,200 tonnes every month.

The brand has carved a sizeable presence in north India and is now planning to expand its geographical reach. “We want to become a known brand in every household,” he says.

Industry watchers and analysts, however, point out the potential challenges for the entrepreneur. As the group focuses more on pushing its brands, it would need to brace itself in terms of settling for lower margin. Look at their profit, says Rajan Gahlot, assistant professor (department of commerce) at Delhi School of Economics, which has only managed to rise to ₹11.06 crore in FY22, from ₹2.57 crore in FY17.

Gahlot also points out a chicken-and-egg problem. To have a wider consumer play, the brand needs to get into multiple categories, which means a lot of SKUs and segments. “The moment you do this, you realise capital limitations,” he says. While bulk trading is a volume play, there is money to be made in the branded game. But it’s a long-term thing. It can’t happen in a decade or so. Moreover, the company, he underlines, needs to get private equity players or raise debt to match its aspirations.

Marketing experts underline another nagging issue. In north India, Pansari is still synonymous with a mom-and-pop grocery store. “Though the name has a strong and direct grocery connotation, it lacks brand appeal,” says Ashita Aggarwal, marketing professor at SP Jain Institute of Management and Research. Look at Dabur, Tata or Emami. The big players started with commodities and ended up building a brand by spending loads of marketing and advertising dollars and focusing on the quality of products. While Pansari might match the biggies when it comes to its offering, it lacks in imagery. “Where is the brand? I don’t see it,” she says, adding that the group needs to spend heavily on building awareness and making the brand aspirational.

Shammi, for his part, reckons that brand Pansari is a work in progress. It has only been a few years since the company started rolling out multiple products. While acknowledging that the overall revenues might have increased, Shammi accepts that a lot still needs to be done in terms of awareness and visibility. “The transition from Pansari ki dukaan to Pansari ka brand is in full steam,” he signs off.