Amazon, Flipkart and Dunzo are adding to their infrastructure, staff strength and inventory to prepare for an expected 25 to 30 percent increase in demand 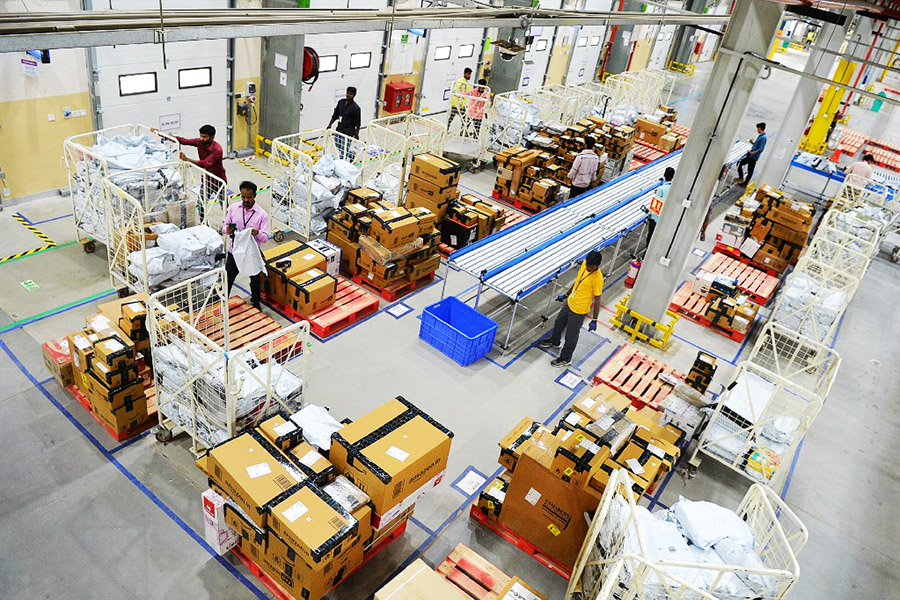 As companies add seasonal jobs, the challenge will be to ensure that retention rates—notoriously low for the industry—remain high. Image: MANJUNATH KIRAN / AFP

India’s ecommerce and quick commerce players are expecting to see a 25 to 30 percent jump in demand, beginning October through December, and are preparing in many ways to meet it.
Amazon India, which will host its flagship The Great Indian Festival later this month, has announced the expansion of its 125,000 sq ft sortation centre and delivery network in Pune. It now has six such sorting centres in Maharashtra, which will support more than 130,000 sellers in the state to reach a larger customer base ahead of the festive season. It also announced the opening of a sortation centre in Ahmedabad to similarly help another 150,000 sellers get closer to their customers.

“This festive season Amazon.in will continue to maximise seller and partner success and deliver customer satisfaction across the country,” says an Amazon spokesperson. The company is further strengthening its engagement with Indian Railways to move packages on 325 inter-city routes—a 5x increase in routes since the ecommerce firm began working with the Railways in 2019. The partnership helps Amazon make one- and two-day deliveries in smaller cities and towns.Also read: Will the festive season be bright for business?
Meanwhile, Flipkart, which runs The Big Billion Days sale to cash in on the festive buying spirit, is on a hiring spree. At its Haringhata warehouse facility, near Kolkata, for example, the Walmart-owned ecommerce major is hiring 400 people a day, according to reports. Currently 3,000 to 3,500 people work at the facility; a total of 11,000 can be employed. The facility also has a processing capacity of 1 million shipments daily. Across Flipkart's facilities, 50,000 seasonal jobs will be added, taking its total workforce to 250,000.Also read: Festive Season Demand: India's auto sales set to soar
“We want existing and new customers who shop on Dunzo to have all the products they need to enjoy the festivals at their convenience,” says Mrunmayi Oke, vice president, category and growth, Dunzo. For that, the Reliance-backed, quick-commerce player is localising its offerings based on the festival and region in which it is celebrated. For instance it saw a massive uptick in the purchase of Brijwasi modaks in Mumbai and Pune during Ganesh Chaturthi, an increase in gift packs sold in Delhi-NCR during Rakshabandhan and high demand for fresh flowers and fruits during Bengaluru’s Varalakshmi pooja. As Diwali approaches, Dunzo will look to up its 75,000-personnel strong delivery fleet, says Oke. Also read: Festive season demand for home appliances, white goods subdued in H1 2022; likely to pick up in H2v
But as companies add seasonal jobs, the challenge will be to ensure that retention rates—notoriously low for the industry—remain high, just like the season’s expected demand.
Amazon, Flipkart and others saw blockbuster festival season sales of about $9.2 billion last year, surpassing pre-pandemic sales of $5 billion witnessed during the festival months in 2019, according to a report by consulting firm RedSeer.

Tweets by @forbesindia
'Our strategy is connecting people with what they are passionate about': Mastercard's CMO
Auto, real estate and ecommerce feel the festive cheer