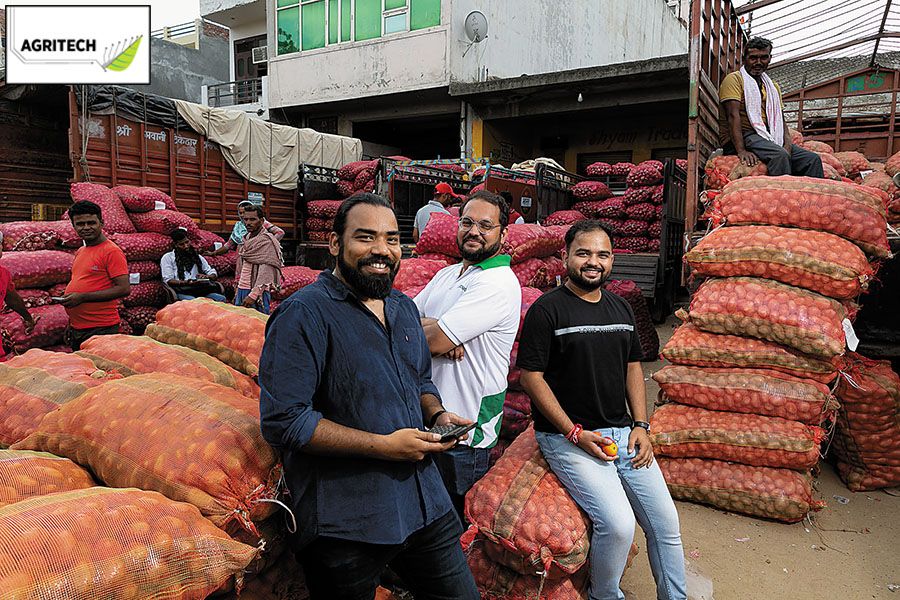 The ‘middlemen’ or arhtiyas, agriculture traders, commission agents and wholesalers, are often seen as an obstacle in the agriculture economy because it is said that due to these agents, farmers don’t get the price they deserve for their produce. But farmers have been selling to agents for ages and the processes and trading practices in this sector have remain unchanged for decades.
A bunch of friends saw an opportunity here and decided to make things easier for traders as well as farmers. Rather than changing anything, they decided to leverage and make use of the existing farming ecosystem. According to them, the problem is so complex and the market so fragmented that they need the support of the prevailing network. The idea is to focus on gaps like data analysis, and bridging financing gaps using technology, without changing anything for the unorganised workers in the supply chain who can continue to focus on their own processes developed over generations.

In April 2019, Nukul Upadhye, Jitender Bedwal, Nikhil Tripathi, Mahesh Jakhotia and Daya Rai co-founded Bijak, a B2B marketplace for agricultural commodities that connects buyers, sellers, traders, wholesalers, food processors, retailers and farmers. It allows producers to sell their produce at real-time prices to wholesalers and retailers. The startup also offers loans for buyers and working capital for producers. It provides aggregated logistics services to eliminate wastage and avoid partial truck loads. Other features include digitising transactions with electronic book-keeping, advance payments, and an individual rating system. Bijak’s mobile application is available on iOS and Android platforms.
“Traders have built their domain expertise over generations and we thought leveraging this skill is important. These agriculture traders have been acting as a backbone in the agriculture value chain for years and they are an integral part of the ecosystem. We can optimise the value chain without eliminating them, maybe by making them more accountable, by leveraging technology,” says Tripathi, one of the co-founders. 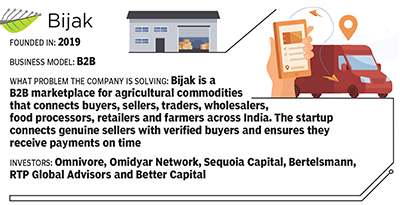 Today, the Gurugram-based startup claims monthly transactions worth over Rs 300 crore, with a presence in more than 1,200 regions across 27 states. The Bijak app has a huge data pool of transactions and enables any kind of seller—a farmer, trader or an aggregator—to find more information about the counterparty and trade with them in a seamless way.
There is a lot of trust deficit between buyers and sellers due to various reasons like sellers finding it difficult to discover buyers, then not receiving the payment on time and at times not receiving the payment at all even after the delivery. The sellers also have limited access to the buyers, mostly only within their region. According to Bijak, there are around 40 lakh sellers and only 5 lakh buyers in India, out of which 75,000 buyers and sellers trade on the Bijak platform.
“We solve the economies of scale problem. A seller who was dealing with 10-15 buyers now gets a chance to deal with more than 100 players on the Bijak platform. A potato seller from Agra who was working with only one buyer from Bengaluru now has the option of selling in Khammam in Telangana, a place he would have not even heard about. Plus a lot of times there’s no guarantee of getting payments. So finding a credible buyer has been a problem and that is our USP, suggesting credible buyers across India and a variety of commodities,” explains Tripathi.
Vikas Nagawade, an agriculture trader from rural Pune who deals in sugarcane, pomegranates, strawberries and other vegetables, used to find buyers in Pune market mandis. His reach was limited to the local market and at the most South India. Last year, 36-year-old Nagawade found out about Bijak through a news channel and decided to register on the app. Earlier, he used to sell 50 tonnes in two months, which has gone up four times to 200 tonnes because he is now connected to buyers across India and selling the produce has become easier with access to more buyers. “The best part about using this platform is the transparency and receipt of payments as soon as the goods are delivered. Finding genuine buyers has always been a challenge. But through this app, trading has become convenient. Bijak charges 1-5 percent commission on each transaction,” he adds. Most of the company’s revenue is generated from discovery fees.

Within six months of inception, in September 2019, Bijak managed to raise seed funding of $2.5 million from Omnivore, Omidyar Network and Sequoia Capital India. The company has managed to raise a total of $35 million—the latest round was in January, in which the company raised $20 million in a Series B funding round led by Bertelsmann with other existing investors participating. Bijak’s current valuation stands at $180 million. The startup says their platform oversees trade in over 100 commodities every day and now sees an annualised gross merchandise value of Rs 3,500 crore.
“We loved the vision of Bijak, the speed of adoption and the team. They develop the product so fast and they are true fighters through a lot of challenges the business has undergone during the Covid-19 pandemic,” says Galina Chifina, partner at RTP Global, who is also one of the investors in Bijak as well as agritech company DeHaat.
In the months ahead, Bijak plans to double down on solutions to remove friction points like trust deficit among traders and lack of access to credit, among others. The startup is creating a massive database that can be used to deploy artificial intelligence solutions to create a more responsive platform. Apart from the Bijak app, they’re expanding into other ventures like JUST Fresh Produce, Bijak Global and ChargeERP. JUST Fresh Produce will focus on selling farm-fresh fruits and vegetables to retailers and direct customers. Bijak Global will be a one-stop platform for all agri-sourcing needs of global buyers. This platform also intends to connect Indian agri-traders with potential buyers from across the world and help expand their business opportunities. ChargeERP is a mandi accounting software specially designed for commission agents, merchants and traders.
“There is still a long way to go. Our work is not relegated to nailing the next big funding. Some of our biggest achievements were centred on being of service to the greater community and we will continue to focus on that while growing our business,” says Tripathi.

Tweets by @forbesindia
How Agrowave is building a farm-to-market business
Festive season demand: Residential real estate on the rise