How Agrowave is building a farm-to-market business

Farmers spend day and night travelling to mandis to sell their produce, haggling over prices, dealing with traders and middlemen, and worrying about storage. Agrowave is trying to solve these problems 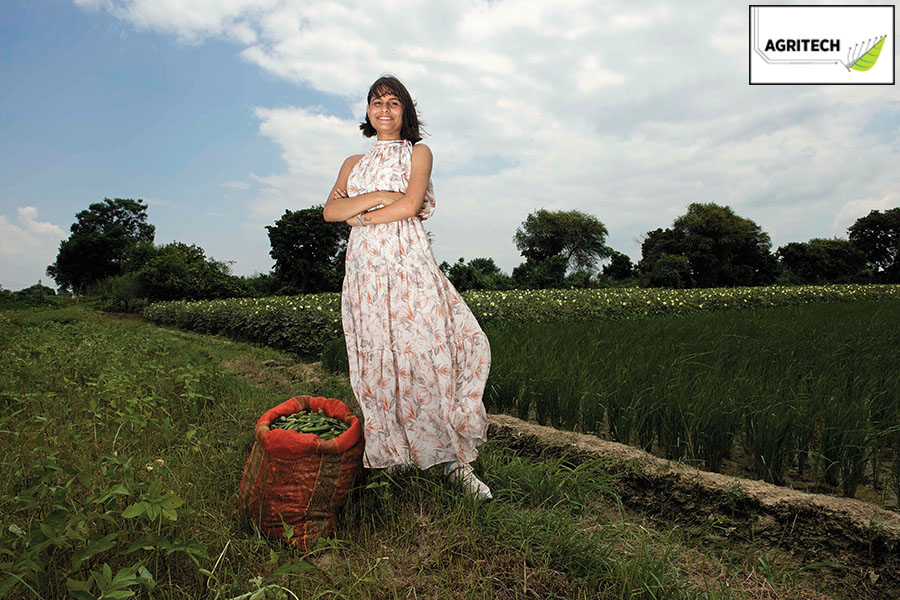 Anu Meena had spent her childhood on farms in Manoli village in Rajasthan. Her grandfather was a farmer selling wheat, vegetables and pulses. She attended school, and tended cattle. Although too young to notice, she understood that selling produce was a difficult task. To spend day and night traveling to a mandi (marketplace), haggle over prices, deal with middlemen and traders, and worry about storing produce, especially with rising temperatures, was every farmer’s nightmare.
With an aim to solve these problems, in 2017, she launched agritech startup Agrowave. The farm-to-market business model helps farmers sell their produce from their farm gates through mobile pickup stations. Farmers can choose the mandi they want to sell the produce at, the pickup timing, the buyers or traders, the amount of produce they want to sell, all through an app.
Agrowave, which sends pick-up vans and takes the produce to the mandi the farmer has chosen, is connected with 5,000-plus farmers across Rajasthan, Haryana, Madhya Pradesh, Punjab and Maharashtra.
But the journey hasn’t been smooth, says Meena. “I wanted to help my grandfather and farmers like him, but I knew that all I wanted was to get into an IIT,” she recalls. A bright student, she travelled five km from her village by foot to her school in a town. Not only was she the first person to score the highest in Grade 10 in her village, she also became the first to crack the IIT entrance exams. “My father earned Rs 8,000 a month. And we were six siblings—five sisters and a brother. My mother pushed him to take me to Kota for coaching,” she says. She got into IIT-Delhi for biochemical engineering and biotechnology. “It’s not considered a good stream, but I wanted the exposure, learn new things, and experience a culture outside my village.” 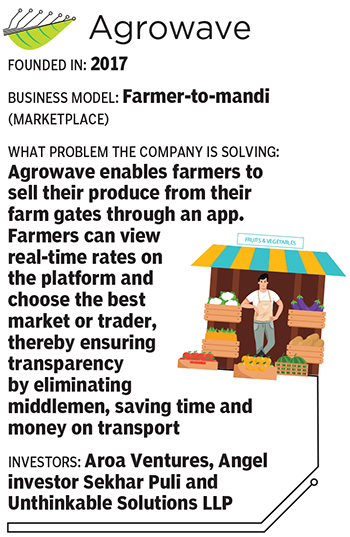 However, the first challenge for the Hindi-medium-educated student was the language of instruction at IIT. “I used to translate everything from English to Hindi and then try and understand concepts. My confidence took a major hit,” she says. To overcome that and motivate herself, she enrolled into sports. At the inter-IIT events, she bagged gold and silver in athletics, which not only boosted her confidence, but also got people to notice her instead of being mocked at. “I didn’t win for people. It was to better myself,” she says.
After graduating in 2016, she worked for a month in a logistics startup, but wanted to do something for farmers. When approached by another agritech startup to set up a unit in Rajasthan, she decided to take the plunge herself and went on to launch Agrowave. Again, she became the first person in her village to do so. “The experience was a stepping stone for me towards understanding logistics, processes and team building, so it certainly helped although I hadn’t even thought of the startup at my stint in the company,” she says.
All of 23 then, Meena went on to look for an investor, at a time when she was borrowing money from friends to pay rent. Through friends at McKinsey & Company, she got help in making presentations, and with a LinkedIn post, started the search for investors. The first funding of Rs 1.5 lakh helped her hire interns, do some groundwork to prove that her model—then B2C—had buyers, and register the company. The same investor, on Meena’s insistence, funded the startup again, but at a high equity. The challenge was to fix this. “It has to be my worst memory in the journey so far. I wasn’t getting funds from the market because I had diluted so much equity. It was a tough phase,” she says. But with help from her mentors, the problem was resolved. “Although that is the best memory, I think about where we’d have been if I hadn’t lost those two years. But it also taught me to stay patient and read people better.”
As of date, the startup has raised three rounds, the latest being a $2 million funding in pre-Series A in January from Aroa Ventures, the family office of Oyo founder Ritesh Agarwal.
Explaining the revenue model, Meena says a trader is charged a 2 percent commission, and the farmer pays Rs 50 per transaction. The topline for FY22 (GMV) stands at Rs 150 crore.
As an entrepreneur, some days are hard. “As a graduate from IIT, I could have had a cushy job. But my struggles can’t be compared to what a farmer faces in India today,” she says.
On the one hand, in 2021, India ranked 101st on the Global Hunger Index, out of 116 countries. On the other, every year, 40 percent of food produced in India is wasted, amounting to a loss of up to $14 billion, as per estimates by the United Nations Food and Agriculture Organization.
Despite the progress in technology, India’s ranking means that the level of hunger is alarming, thanks to lack of proper storage facilities, transportation, and unorganised mandi regulations.

“Prices at the mandis fluctuate randomly, for small-and-medium-sized farmers, transportation also becomes an issue. Hence, through Agrowave, we’re trying to get a system in place,” she says.
However, changes are not always welcome. While farmers do understand the concept, it’s difficult to gain their trust. “Therefore, we need a lot of physical presence and handholding.” Then there are unions. “These groups, along with villagers, have tried to oppose new systems but we try our best to work along with them and use our platform for their business.”

Masroor Ahmed, a trader from Sahibabad in Ghaziabad, Uttar Pradesh, says, “I’ve been using Agrowave for 1.5 years, and it has benefited me a lot. Everyone is aligned, rates are predefined, things are smooth now.”
In the near future, Meena wants to raise another round of funding, to strengthen the reach and logistics, and focus on building transportation.
“The agriculture sector is going to be booming globally. And India is undoubtedly one of the topmost agriculture-based economies. But unlike others, India and Africa are places where technology hasn’t taken on a major role. So it is a ripe ground for agritech startups that tackle a major problem of food loss like Agrowave,” says Sekhar Puli, investor and advisor, adding that besides Meena, who is ambitious and tenacious, it’s the team’s ability to be able to pivot under different circumstances that keeps investor interest alive.
Meena is also working on a farm-to-office model to supply fresh fruits to office employees. “I want to scale, reach millions of farmers so they don’t have to waste time going to a mandi. I want to improve their quality of life because I have lived it and it is very tiring.”