Niramai: The bot will see you now 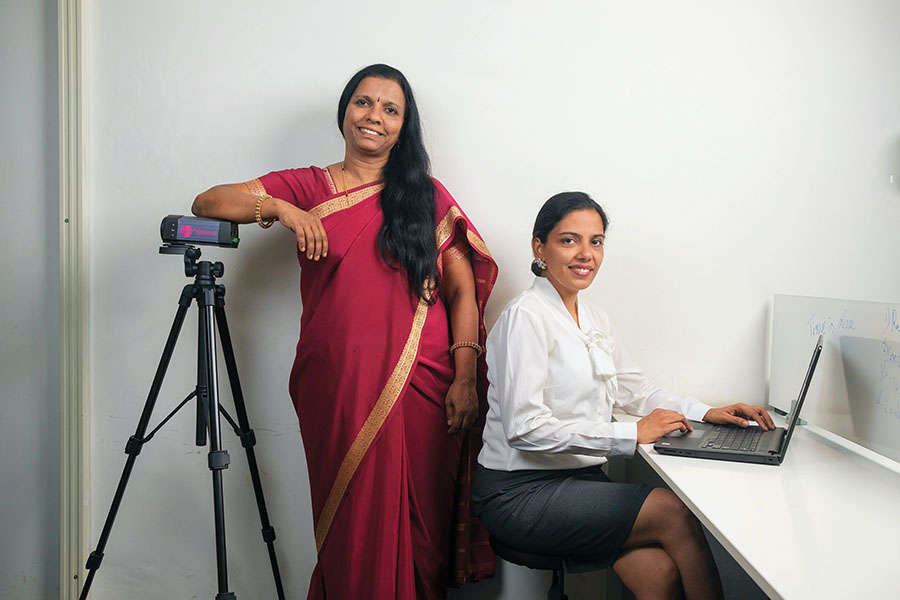 In 2013, as head of the data analytics team at a multinational technology company in Bengaluru, Geetha Manjunath was fathoming ways to unleash analytics and artificial intelligence (AI) in health care.

At the time, her team was running a pilot to measure the heartbeat of newborns using web cameras at Manipal Hospital in Karnataka’s Udupi, 400 km west of capital Bengaluru. Manjunath was pondering over broader applications of the cameras in medical diagnosis.

She learnt about how thermal imaging was being used in detecting breast cancer. “We started experimenting with breast thermography as an exploratory project. Initially we used just image processing algorithms for identifying the tumour’s location. Later, we thought why not use AI to identify benign and malignant tumours?” recalls Manjunath, now the CEO of Niramai, a health care startup she launched in 2017, borrowing a page from the side project she commissioned at her former employer, whom she declined to identify citing non-disclosure clauses. Her Linkedin profile, however, suggests she was employed with Xerox during this time.

Between 2013 and 2015, Manjunath and her team worked on conflating AI and breast cancer screening, eventually figuring out a way to non-intrusively locate a tumour. The logical next step was to get into diagnosis.

This was also a time when Xerox was undergoing a churn. Under pressure from activist investor Carl Icahn, the US company was in the process of carving out its business process outsourcing wing into a separate entity called Conduent. The restructuring would have brought the curtains down on Manjunath’s work.

She started toying with the idea of using the technology developed at Xerox to launch a startup that could accurately detect a malignant tumour in the breast. By then, she had convinced Nidhi Mathur, a senior product manager at Xerox, and two other colleagues, Himanshu Madhu and Siva Teja Kakileti, to strike out on their own.

In March 2016, Manjunath put forth a proposal before the senior Xerox management to let her walk away with the technology to forge a startup focussed on cancer detection.

Manjunath spent nine months negotiating with the Xerox management for control of the technology. Eventually, Xerox relented. “It was definitely not an easy discussion. But, they realised that the strategic fit was loose. This idea needed a single-minded focus and execution. A lot of clinical work was required and customer segments that are traditionally not their customers, had to be engaged to make it a success,” says Mathur, chief operating officer at Niramai.

On January 2, 2017, the first working day of that year, Manjunath, Mathur, Madhu and Kakileti flagged off Niramai. “We had reached a fairly good level of accuracy in a research lab setting. We saw a lot of value in this project. So, instead of shutting it down, I thought, why not create a startup and provide the solution to women who need it,” says Manjunath.

In hindsight, it is evident she wasn’t off the mark in her assessment of the project’s value. Breast cancer has been spreading its tentacles in India fast and has been identified as the most prevalent of all cancers among Indian women in a joint report by EY and industry body Federation of Indian Chambers of Commerce & Industry (Ficci) in 2017. According to the 2016-17 annual report by the National Centre for Disease Informatics and Research, about 1.34 lakh Indian women were afflicted with breast cancer in 2015. The number is projected to balloon to 1.79 lakh in 2020.

The most common method of breast cancer detection, mammography, besides being intrusive, has other limitations. Mammograms are essentially X-rays and frequent exposure to such radiations is not advisable. Second, mammography shows lumps, essentially high density tissues, in the breast as a white spot on the X-ray plate. “Women under 45, and a subset of women even above 45, have fibro-glandular tissue, which constitutes dense tissue. This means, in a mammogram, the whole breast will appear white. Then how do we find a white spot in it?” asks Manjunath. Moreover, every lump is not malignant.

This is where Niramai assumes significance. An acronym for Non-invasive Risk Assessment with Machine Learning and Artificial Intelligence, Niramai remains true to its name. It uses a thermal imaging device to measure temperature distribution in the chest and a cloud-based analytics solution that parses the data to identify if a tumour in the breast is malignant.

In all of this, AI continues to remain at the core. “We mark the area of potential malignancy based on an analysis of temperature distribution in the chest. We [also] take demographic information like age and history of cancer in the family etc under consideration,” explains Manjunath.

“ Instead of shutting it down, I thought why not create a startup [focussed on breast cancer detection]?”
Geetha Manjunath, CEO, Niramai

Says Manish Singhal, founding partner at pi Ventures, “Reading images accurately to distinguish a normal thermal activity from an abnormal one is a computer vision problem. That is where the AI comes in because it can do pattern-based recognition.”

“Thermal imaging has been around for many years but a thermogram is difficult to read conclusively with the naked eye, accuracy is about 70 percent. Hence thermal detection of breast cancer with manual reading has never progressed. With AI, Niramai has increased the accuracy to over 90 percent,” Singhal adds.

Niramai, which imports its thermal imaging devices from Sweden, currently works with seven hospitals and diagnostic centres in Bengaluru, Pune and Dehradun. “We provide end-to-end solutions to the institutions, including equipment, training, report generation, and doctor certification service. They can either pay for the hardware upfront or lease it from us. We then charge a revenue share for every report provided,” says Mathur.

Niramai is also working closely with gynaecologists to offer thermal screening to women who are more comfortable approaching their gynaecologists for consultation on breast cancer symptoms. The goal is to make breast cancer detection accessible to every woman, and of course, make money in the process.