How a husband-wife duo started an indigenous, affordable watch microbrand for the discerning buyer 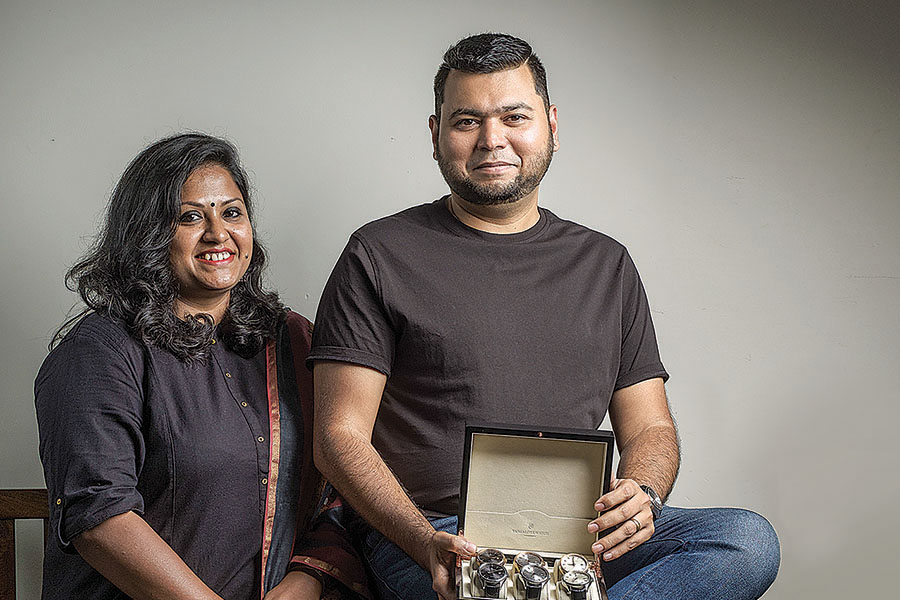 In mid-2016, Nirupesh Joshi (37) and Mercy Amalraj (37), husband and wife, spent close to 10 weeks touring various countries on rail—two weeks in Japan, six weeks on the Trans-Siberian Railway Network and another two in Vietnam. For Joshi, it was a sabbatical, after having worked at cloud service provider Akamai Technologies for 10 years across Boston, Seoul, Tokyo and Hong Kong.

Joshi, who was Akamai’s director of services for the Asia Pacific region based out of Hong Kong, had quickly risen within the company, which he had joined as an engineer in Bengaluru a decade ago. Amalraj, an IT professional, gave up her career in Bengaluru to accompany Joshi around the world. She did, however, take up a few freelancing assignments related to software quality assurance in the countries the couple stayed in.

“The next jump for me was going to be Singapore and that’s when we decided to take a break,” recalls Joshi at a cafe in Bengaluru’s JP Nagar suburb. After their rail sojourns, they visited Madurai and Rameshwaram, both cities in Tamil Nadu, to spend time with their families. “It was also a time to reflect,” adds Joshi.

That period led the couple to launch the Bangalore Watch Company (BWC), an affordable luxury watch microbrand, in January 2017.

Globally, there is a growing tribe of watch enthusiasts who are launching their own microbrands for the discerning buyer. As Joshi explains, microbrands have independent ownership — predominately by watch enthusiasts such as themselves; they manufacture and sell directly to customers, mostly online, and don’t have offline distribution and a retail presence. Given their direct selling approach, these watch microbrands don’t carry the retail markups that many luxury brands do. For example, says Joshi, if you buy an Omega for ₹3 lakh the retailer takes a 35 percent margin. “It’s a steep margin because the retailer is putting money upfront, placing the product on the shelf and waiting for it to be sold. So that margin is justified.”

That apart, for Joshi and Amalraj, the whole build-up to BWC happened in Hong Kong, known to be a paradise for watch enthusiasts and collectors. “You throw a stone and it can hit a Patek Philippe or an A. Lange & Sohne lounge; it’s so congested with watch boutiques,” says Joshi, who along with his wife spent their weekends at these boutiques. “I had a colleague who used to buy these brands. We used to tag along with him.”

This April, the couple launched BWC’s first collection ‘Renaissance Automatic’, which is a tribute to one of the country’s well-known watch brands that went bust a few years ago. It’s a gentlemen’s collection of six automatic watch models with only 500 pieces being made. “To our surprise, a lot of women have bought them because the trend is for women to wear large watches,” says Joshi, who didn’t wish to disclose sales figures.

The collection takes inspiration from the erstwhile HMT Janata watch, which came out in the late 60s. Emblematic of the Janata, the Renaissance Automatic collection features dauphine hands, a tapered triangle shape with a distinct line down the middle, a domed crystal glass, and dials embellished with stainless steel indices as hour and minute markers. There are no Roman or Arabic numerals on the dial.

“It’s a really elegant watch; timeless design and a well-finished product. I’m quite impressed,” says Dilip Sivaraman, an independent clockmaker from Bengaluru. “It’s really encouraging that more people are getting into horology (the art of making clocks and watches), especially those from the IT field.” And he is quick to point out: “You’d rather have watch lovers starting a company because you have a lot more passion built into the product.”

Abhishek Jakate (29), a consultant at Lausanne Hospitality Consulting in Switzerland, is a self-professed horology geek. “I am always reading magazines and websites like aBlogtoWatch, Hodinkee, Monochrome and Fratello that discuss watches, watchmaking, and also upcoming brands,” says Jakate, now based  in Lausanne, an hour away from Geneva. In March, he stumbled upon an article in aBlogtoWatch about BWC, which led him to their website. “I just casually registered without being really sure if I wanted to purchase anything,” he recalls. A day or two later, Joshi called him and spoke about the philosophy behind BWC and the story of how the company started. As an Indian living abroad, Jakate says, “I was keen to have an Indian brand on my wrist and was very intrigued by his story.”

Jakate has a collection of nine watches, including one from BWC, of which the most expensive is a Jaeger-LeCoultre Reverso at over ₹4 lakh. Commenting on his BWC watch, which is about one-tenth the price of the Jaeger-LeCoultre Reverso, he says, “I bought the Grand Ivory stainless steel model that, to me, is a great example of a product that is understated in luxury.” And adds, “Though the watch itself is outstanding in quality and feel, the appeal to me is an emotional one with its Indian heritage and story.” 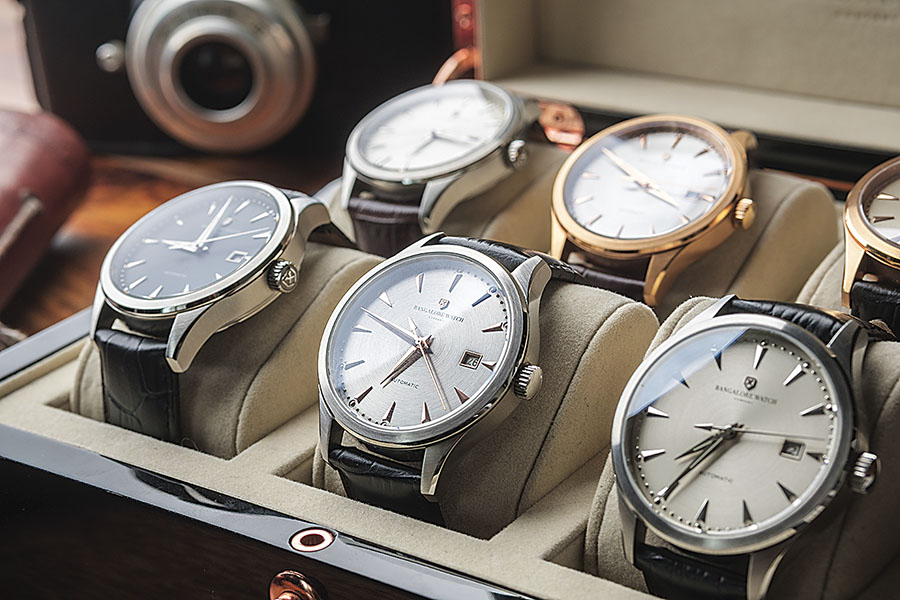 The limited edition watches made by the Bangalore Watch Company


BWC’s Renaissance watch collection comes in a standard 40 millimetre diameter case that is made from surgical grade stainless steel (316L). There is a rose gold-plated stainless steel case variant as well. On the front of the case is a domed sapphire crystal, while the back has an exhibition case, whereby one can see the movement inside the watch. The movement is made by Citizen, Japan. “The stainless steel case comes from Hong Kong and the crystal from Switzerland. We source leather and a few other small components from India,” adds Joshi, who is also head of design at BWC. The final assembly happens at a contracted watchmaking facility in Bengaluru.

According to Joshi, the Indian watch market is bipolar: On one hand, you have the Swiss watches (₹60,000 plus) for people who can afford them, while, on the other, you have the mass-market watches (Timex, Fastrack, Sonanta) which are mostly ₹2,000 and below. There is also a mid-segment priced between ₹10,000 and ₹20,000, which is dominated by fashion brands such as Tommy Hilfiger, Michael Kors, and Esprit, among others. “The bridge-to-luxury segment is what we are targeting. Our watches currently are priced at ₹38,800,” says Joshi.

Further, as per his estimates, there are hundreds of watch microbrands around the world. One example that he easily relates to is the Melbourne Watch Company, which was founded in 2013 by Sujain Krishnan, a former IT consultant of Indian origin. “There are at least about six to seven brands in Singapore alone,” says Joshi.

Watches as a category is among the top crowdfunded ones on Kickstarter, a leading crowdfunding platform. A quick search reveals that there are over 3,500 watch projects on the platform. “People who buy these watches are typically enthusiasts. Some microbrands differentiate by the materials they use, some differentiate by telling a story. We like to think we are the latter,” says Amalraj.

For 36-year-old Adarsh Srinivas, a real estate developer and restaurateur based in Bengaluru, BWC fulfils a long cherished dream of Indian watch enthusiasts. “To me, it [the brand] is what discerning watch lovers in India want from an indigenous, independent watch brand and couldn’t find till now.” For a person who flits between a Rolex, a Montblanc and a Jaeger-LeCoultre, Srinivas says, “The aesthetics [of the BWC watch] really struck me and I’ve grown to love it as an everyday watch. I hope BWC can mature into an independent watch brand like Kikuchi Nakagawa of Japan or Farer in England.”

Do Joshi and Amalraj have the vision to take it there? Time will tell.

Tweets by @forbesindia
Luxury on your wrist
Robots at your service