The managing director of Xiaomi India and VP at the Beijing-headquartered smartphone maker, who previously co-founded etailer Jabong, analyses the company's rise in the country 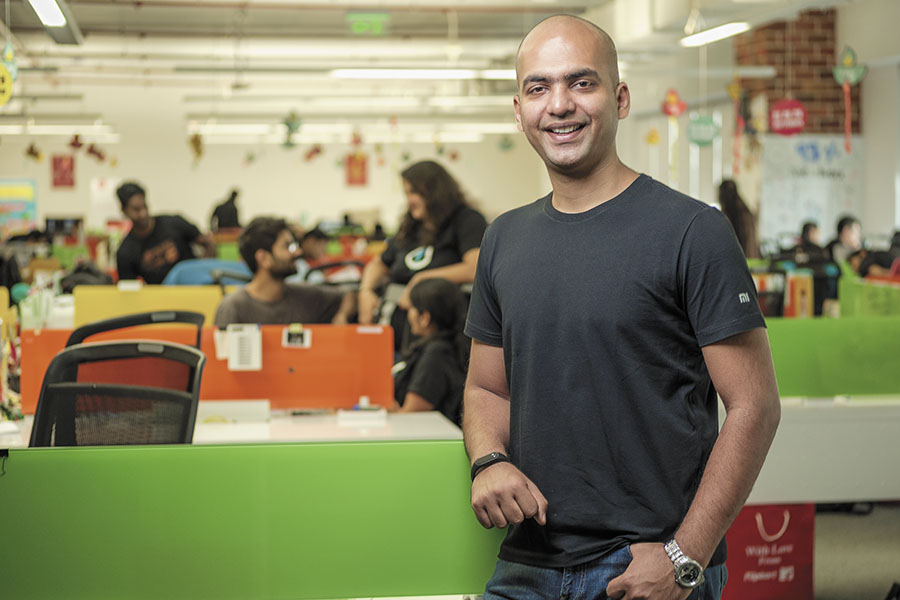 Q. What helped Xiaomi’s rise in India in a short period of three-plus years?
We were a small, young startup with competitors that had thousands of employees working for them for over a decade. Now, we have either overtaken them or reached the same level with just 300 employees. So, of course, a lot of things have gone right for us.

First, the ability to bring to the market really high-end, high-quality products at very affordable prices. That is the core. If you’re not able to do that, nothing else will help. Redmi Note 4 is a great example.

This year, all the top three selling phones in India are Xiaomi’s. Note 4 is No 1, No 2 is Redmi 4 and No 3 Redmi 4A. For each of these phones, we were able to do something remarkable. For example, phones with similar specifications as the Redmi Note 4 were being sold at ₹25,000 to ₹30,000. We were able to launch it—with 4GB RAM, 64GB internal storage and Snapdragon 625 processor—at ₹13,000. We launched a 10,000 mAh power bank on November 21, our first made-in-India power bank. It has a lithium polymer battery, and a full PCB [printed circuit board] inside, providing nine levels of protection. The case is made of anodised aluminum, versus the plastic bodies of competing products. And we have launched it at ₹799.

The second thing that has worked for us is our investments and commitment to India. We have two big factories now [Foxconn’s facility in Sri City in Andhra Pradesh] and have launched a third [in collaboration with contract manufacturer Hipad Technology in Noida] for power banks. We have set up an R&D centre in Bengaluru, we’re designing features specific to India, we’ve set up three big call centres in India—in Indore, Bengaluru and Chennai. We also have five big warehouses—two in Bengaluru, two in Delhi-NCR and one in Mumbai—26 smaller warehouses, and more than 600 service centres across the country. A lot of infrastructure development has happened over the last three years. And we’ve brought the entire ecosystem to India: Whatever we’ve done in China, we’ve done here. Infrastructure, R&D, services, logistics, we’ve built end-to-end and that has helped us a lot.

Our business model has helped us bring down costs drastically without compromising on quality. We have just-in-time manufacturing, whatever we produce every week we sell every week, and the leanest distribution structure in the country. We have had a very low marketing budget for the first three years. Now, we’ve started doing a few things, we’ve had a few TV ads, we’re working with actor Katrina Kaif on the Redmi Y1 series.

We cut down all these costs to pass on the benefit to our customers, and, of course, we had very little margin. We make money from the internet. We make small amounts over a long period of two to three years, rather than as a one-time amount. It’s a difference of philosophy and of business model.

Three years ago, while everybody wanted to go offline, we wanted to go online. And even when we went offline, we did it differently. In Bengaluru, some competitors will have their phones available in 1,000 stores. We are selling only through 50 stores and we have close to 25 percent market share in the offline part in Bengaluru. So we’ve gone very deep, instead of wide. Today, every other phone sold online in India is a Xiaomi and overall, in India, we have 23.5 percent market share (July-September 2017 period). 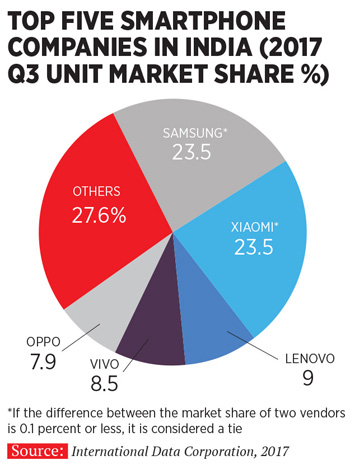 Q. You also have an active fan base and community.
We’ve built an Mi community with 2 million active users, who discuss not just Xiaomi products but also everything related to technology, including various products from other makers and internet companies. The app has had a million downloads. We now have official Mi fan clubs in 20 locations, with office bearers, and they meet and discuss and help us spread the word about Xiaomi.

We’ve started college chapters. We have one in IIT-Madras, and we’re setting up more in many of the big colleges in the country. The last thing, of course, is the team—only 300 people with an average age of 29. At 36, I’m considered to be an oldie. Many of them have joined without any functional experience, and have risen to the challenges placed in front of them.

I myself didn’t have a mobile- or smartphone-industry experience, and when the Xiaomi founders recruited me, they were pretty happy with that. They were expecting me to have an internet mindset and background instead.

Q. About becoming more of an internet company, in China you are quite big on that front. Where are you at in India?
[Holding up his phone] This is a theme we partnered with [the makers of] Justice League. We have a lot of apps in India. Xiaomi has its own browser and there are paid icons as well, which if a user clicks on, will result in Xiaomi getting a bit of money. We have content services as well, with ads interspersed.

If you search for Xiaomi on the Google Play Store, there are multiple apps. Users have organically downloaded many of them, from a calculator to the TV remote control app to Mi Wi-Fi, MiHome and Mi Community. Many of these have been downloaded in the millions, so we’re basically building a full ecosystem of apps and services. The aim is to eventually make money from these apps, services and MIUI rather than just from hardware.

Just like we have a big content library and service in India, at some point, we will also launch a content service, which will add revenue via content downloads, pay-per-use services and so on. And because we have a local content business team here, we believe we can provide really good customised services to fans on our browser and app store. It’s still early days for us, and we’ve started focusing on the internet services only recently, so give us a few quarters.

Q. Xiaomi’s founder Lei Jun recently spoke about investing a billion dollars in India. How would it help you expand your ecosystem here?
We have already made a few investments in India. Hungama Digital Media Entertainment and KrazyBee, a fintech company, are two that we’ve publicly mentioned. But there are a few more as well, with the total being in the high single digits. In China, we have invested in more than 300 companies and probably a few billion dollars. In India, we’d like a similar ecosystem of companies building mobile apps, technologies or services that can be integrated into our phones.

The broad aspiration of Lei Jun is that he would like to invest in about 100 companies in India, give or take, collectively becoming a strong portfolio of mobile tech and services businesses over the next five years. If you think about it, 100 companies and a billion dollars mean an average of $10 million per company, which makes it a realistic aspiration.

Tweets by @forbesindia
Ten interesting things that we read this week
Xiaomi: In-store and in India