Every global crisis is an opportunity for India: Amitabh Kant 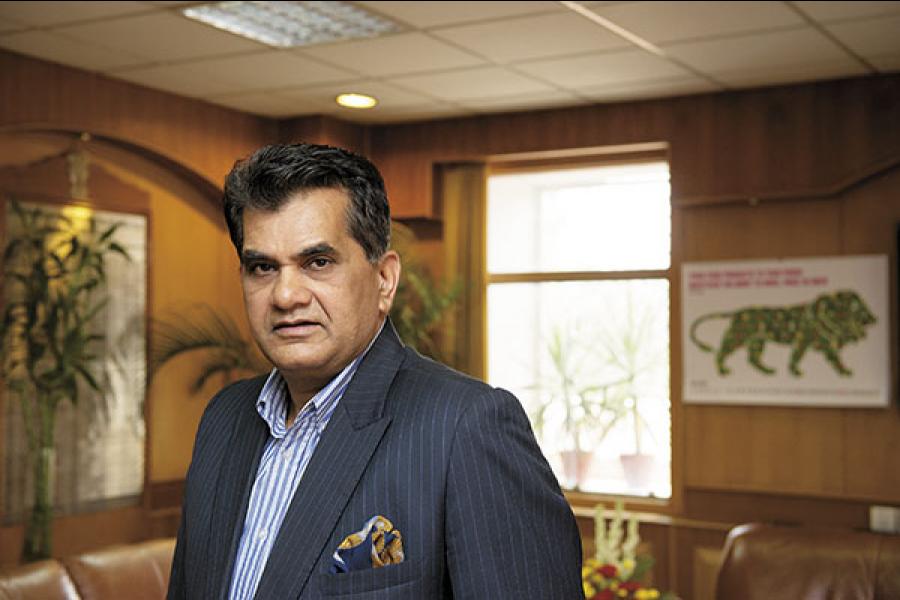 Q. Is this the right time for Make In India given the global surplus in capacity?
This is the perfect time. Every single global crisis is a huge opportunity for India [and] it must use it to the fullest. If India doesn’t seize this opportunity now, we’ll never get another chance. Japan penetrated the global market when there was a slump in the global economy, when it was completely demolished after World War II. Look at Korea; [it also] penetrated the markets when there was a slump in the global economy. What did China do? [In the] initial period, it went in at a point when there was a slowdown in the economy. And when the economy grew, it had perfected itself to penetrate markets. You can’t get a better opportunity than now. What is our share in global exports? It is just 1.5 percent. India must pursue it [the opportunity] aggressively.

Q. What are the key differences between the UPA’s National Manufacturing Policy and the Make In India initiative?
I am not a great believer in policies. I am a believer in action-oriented plans. In Make In India, we don’t have a policy, it’s just an action plan. We’ve just got cracking. We said we’ll improve ease of doing business. We started opening up the economy: Defence, railways, construction, medical devices, insurance and pension funds. The only policy that we have drafted is the Intellectual Property Rights Policy, which is now going to the Cabinet. Even on startups, we don’t have a policy. India needs to get cracking with implementation rather than drafting policy measures.

Q. Will Make In India provide a push to infrastructure?
Over the last 18 months, our strategy has been to make India a very simple and easy place to do business. We did that with the government of India and we are doing that with all the states. We are making it easy and creating a sense of competition at the state level. We’ve kept opening up the Indian economy more and more. We are now saying that we need to create top-class infrastructure to have a better turnaround time at ports. We are [in fact] focussing on better quality infrastructure everywhere, which will drive India’s growth story over a long period of time. Infrastructure creation is the key to good quality manufacturing.

Q. How has the Make In India Week translated to actual work on the ground?
The Make In India Week was about putting all the players who are critical for Make In India together because many people kept saying that very little has happened. So I said we should showcase what India has achieved in the world of manufacturing. This was nothing but Indian manufacturing on display. It was important to put the private sector players and governments together. That’s why we had around 3,000 business meetings. This was a platform for doing business.

Q. The ultimate push to Make In India will come from the states…
Seventeen states and the chief ministers of 12 states, cutting across political lines, were selling and marketing themselves [at the Make In India Week]. Nowhere has that ever happened. All Opposition-run states were there. From Kerala, Himachal Pradesh and Telangana to Odisha, all are forcing themselves to become more and more efficient.

Q. What will India’s ranking be next year on the ease of doing business index?
Next year we will jump about 30-40 positions.

Q. Do you see the global slowdown impacting foreign direct investment (FDI) inflows?
We’ve grown by 48 percent [as far as FDI is concerned] when globally there has been a decline of 16 percent. That’s what we have achieved. We are the most open economy in the world today. Other than multi-brand retail, we have opened up everything else. So if there’s anything more you feel that needs to be opened up, tell us, we will do that as well.

Q. You are known to be a man of action. Which has been your most favourite campaign undertaken till now?
I quite loved Kerala’s God’s Own Country campaign. I loved the Incredible India and Make In India campaigns too. I do things with passion and I’ve enjoyed every single thing I’ve done. After Make In India, I enjoyed doing Start-Up India. All four [campaigns] have their unique charm and I’ve grown and evolved with them. All this has been possible because of great officers who have worked with me. Atul Chaturvedi (joint secretary, DIPP) was the key driver of the Make In India Week. All of us have worked as a team.

Q. You will be moving on to Niti Aayog as CEO. What can we expect from your new role?
The role of Niti Aayog’s CEO is about transforming India and to my mind, we need to do a lot of work on social sectors. Our indices there must improve and, so, a lot of outcome-based monitoring [must happen]. I will try and reinvent Niti Aayog and myself towards social sectors and infrastructure.

Q. Any parting advice to your successor (Ramesh Abhishek) at DIPP?
I have a dynamic successor who is replacing me. Ramesh is an outstanding officer. He will do much better than what I have done. He will provide even greater momentum to DIPP.