The Covid-19 pandemic is not the first infection in the past two decades to spur disruption—the SARS outbreak in China in 2002 spurred its internet economy and saw Jack Ma grabbing the opportunity with both hands. Now, coronavirus may have provided a once-in-a-lifetime launchpad for Indian companies 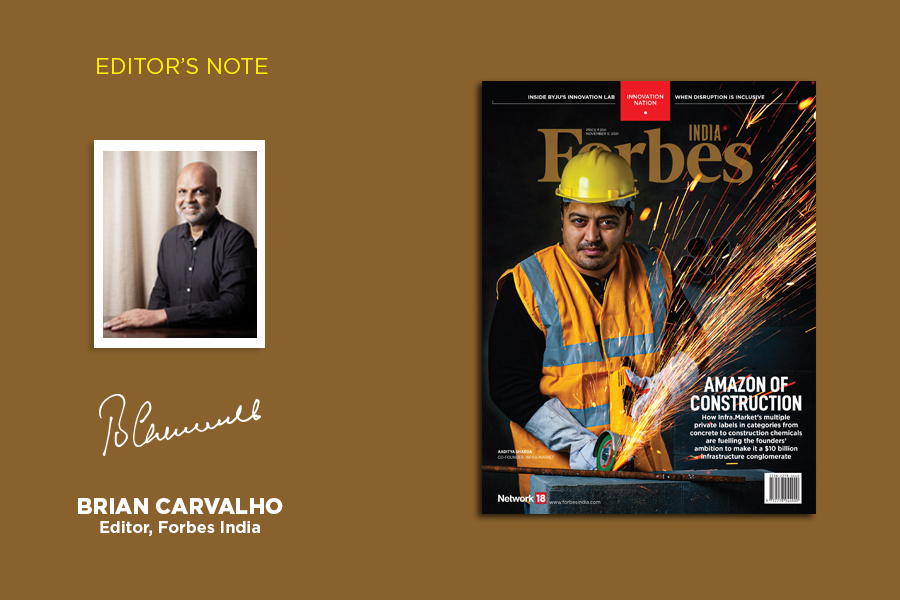 That the Covid-19 infection has triggered unprecedented digital transformation, pivots in business models, and unforeseen opportunities for tech startups has been a theme Forbes India has been on top of for the past one and a half years. The pandemic may be a once-in-a-century phenomenon, but this isn’t the first infection in the past two decades to spur such disruption.

The SARS (severe acute respiratory syndrome) virus outbreak started in southern China in 2002, spreading to at least four other countries. Face masks, sealing of offices, work from home, isolation and quarantine were the order of the day. At the heart of an “innovative startup culture” in that period was Jack Ma, who launched Taobao Marketplace to complement flagship Alibaba and to take on eBay in the Chinese consumer ecommerce market. The SARS outbreak provided Chinese tech and internet companies an opportunity to innovate for growth, and Jack Ma grabbed it with both hands.
As Duncan Clark, author of the riveting Alibaba: The House that Jack Ma Built (2016)—which is as much a story about the emergence of Chinese tech and internet giants as it is about ‘Crazy Jack’—writes: “Although it sickened thousands and killed almost 800 people, the outbreak had a curiously beneficial impact on the Chinese internet sector, including Alibaba. SARS validated digital mobile telephony and the internet, and came to represent the turning point when the internet emerged as a truly mass medium in China.”
As Clark notes, cellphones and PCs became the windows to information about the virus for the Chinese and how to protect themselves at a time when reliable information about SARS was hard to come by. “Crucially for Alibaba, SARS convinced millions of people, afraid to go outside, to try shopping online instead.” The stage was set for Taobao, which offered free listings to sellers, and “adopted a series of guerrilla marketing techniques, including reaching out to hundreds of small but fast-growing sites and online communities that eBay had deemed unimportant”. eBay exited China in 2006.
Taobao by then had 30 million users, which shot up to 170 million in three years; sales had surged from $2 billion to $30 billion.
The short point of the Alibaba-Taobao blast from the past is that there is always opportunity in a calamity. Of course, opportunity may mean different things to different people, from reining in costs to bump up bottom lines year-on-year, to riding on the coattails of punters during a no-holds-barred bull run. The real opportunity, though, is for outsized growth that, like the pandemic, may also be a once-in-a-lifetime launchpad.
The Forbes India cover story is on a startup that’s uniquely poised for such a leap. The five-year-old Infra.Market is in the unglamorous construction-tech sector—think fly ash, concrete, construction chemicals, bath fittings, sanitary tiles. But here’s the deal: Its backers reckon the startup, valued at $2.5 billion at last count and with rapid growth in top and bottom line (it has been profitable since the first year), could go on to be the next big ecommerce story out from India. The estimated worth of the multi-segmented market it is chasing with an array of FMCG-like private labels is $200 billion. The only reservation is whether the startup is doing too much too soon. But, as the founders tell Rajiv Singh, who has penned the cover story, they never think small, risk and reward go hand in hand, and that their ambition is to build a $10 billion global conglomerate. For more on how seemingly dreary categories like concrete and cement can attract innovation and be disruptive, ‘Core to Hardcore’ on page 20 is a must read.Best,
Brian Carvalho
Editor, Forbes India
Email: Brian.Carvalho@nw18.com
Twitter ID: @Brianc_Ed

Tweets by @forbesindia
Three reasons why Infra.Market is on the Forbes India cover
Analysts, Ugly Duckling & Mr India: A peek into the rise and rise of Infra.Market