When Aaditya Sharda and Souvik Sengupta wanted to scale their bootstrapped venture in early 2019, they couldn't find takers. Finally, when venture capital came, the friends managed to save 2.5 percent stake. The Infra.Market story, though, did not get diluted 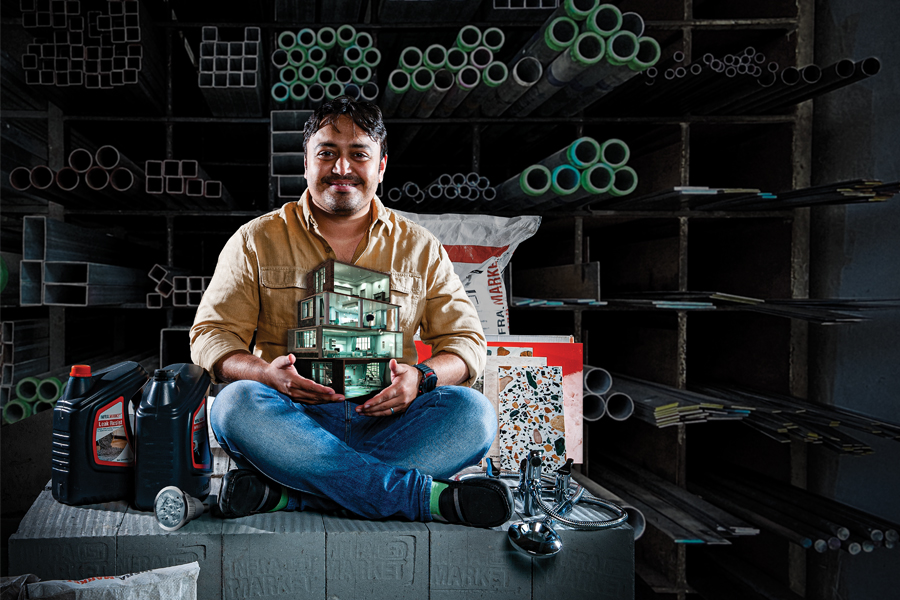 For three years, Aaditya Sharda and Souvik Sengupta slogged hard to make a mark. In fact, they did more than that to ensure that Infra.Market—an online B2B construction material procurement platform mainly dealing with aggregate and concrete—makes some noise.Look at the numbers. While revenue for FY17 stood at Rs 12.54 crore, the next fiscal it more than doubled to Rs 28.5 crore, and closed FY19 with Rs 63.21 crore. The icing on the cake, however, was not sales. The three-year-old bootstrapped venture posted profits right from the first year: Rs 28 lakh, Rs 53 lakh and 1.74 crore, respectively.The friends thought they were building a solid business—call it hard core business, if you will, as it was profitable—and wanted to scale the business by raising venture capital.Apart from concrete business metrics, what also gave them an edge was the fact that a slew of funded startups in construction material had shuttered 2018 onward. “There was a steady stream of failures,” recalls Sharda. By March 2019, investors had lost their appetite for any ‘brick and mortar’ business. The friends, though, were confident. “We were an ugly duckling,” recalls Sharda. Infra.Market, he adds, had ticked all the boxes to get noticed. Investors were also eager to spot a venture with early signs of success. There was only one problem, though. Sharda, Sengupta and Infra.Market had turned out to be Mr India. “We were invisible,” recounts Sharda. Almost all the analysts across VC funds approached by the duo failed to see any promise in the budding story.The reason was that the B2B business model of Infra.Market did not have precedents. So for most analysts, armed with top consulting firm backgrounds and a pedigree of Ivy League business schools, the unorganised and fragmented business of concrete and aggregates did not make sense. “There was no data for them to analyse,” says Sharda. Infra.Market had a business, but they lacked an example.Then in 2019, entered Kanishk Tyagi, who was at the time an analyst with Accel and is now with Falcon Edge Capital. An entrepreneur-turned VC, Tyagi knew he had spotted diamonds in the rough. He made a compelling case to Prashanth Prakash, founding partner at Accel, to back Infra.Market. Prakash had a hard look at the promising greenhorns, saw merit in what the duo was building, and decided to speed up the process.After an exhaustive IC (investment committee) round of over two hours at Accel’s office in Bengaluru, Sharda and Sengupta were spared some time to grab lunch.When the famished friends finished their food, Prakash put a firm proposal on the table. “He said ‘itna paisa, itna equity and no discussion’ [he mentioned the amount and the equity to be diluted],” recalls Sharda, who wanted to try his luck with negotiations. “Nahin, sir. Itna dilute nahin karenge (No, sir. We will not dilute this much),” he remembers having responded at the time. The deal closed in five minutes, both parties shook hands, and the friends saved 2.5 percent stake. “We were supposed to dilute 25 percent, but we did 22.5 percent,” Sharda grins.  Back in June 2019, a 2.5 percent might have looked pony as Infra.Market raised $3.5 million (Rs26.4 crore) at a valuation of $15 million. Cut to 2021. The startup is now valued at $2.5 billion. “Value of 2.5 percent in 2019 is not the same in 2021,” smiles Sharda. Though Sharda and Sengupta managed to save 2.5 percent in 2019, there was somebody in the story who could not.Before Accel came into the picture, the duo was in talks with Nexus Venture Partners. The analyst at the VC firm had declined to invest. After five months, in December 2019, Nexus invested in Infra.Market at a valuation of $60 million. For Nexus, what could easily have been a bet at a valuation of $18 million, ended up as an investment at a valuation that had bloated by over four times!To get early access to the fully cover story, subscribe to Forbes India

Tweets by @forbesindia
Innovation during infection: On finding opportunities during a calamity
Gender and climate change: Meet the women of Sanjay Gandhi National Park, Aarey, and beyond