Forbes India's special package this fortnight is on education—online and offline, school and home, urban and rural, real and fake. Plus, is a duopoly emerging in edtech, and a lot more 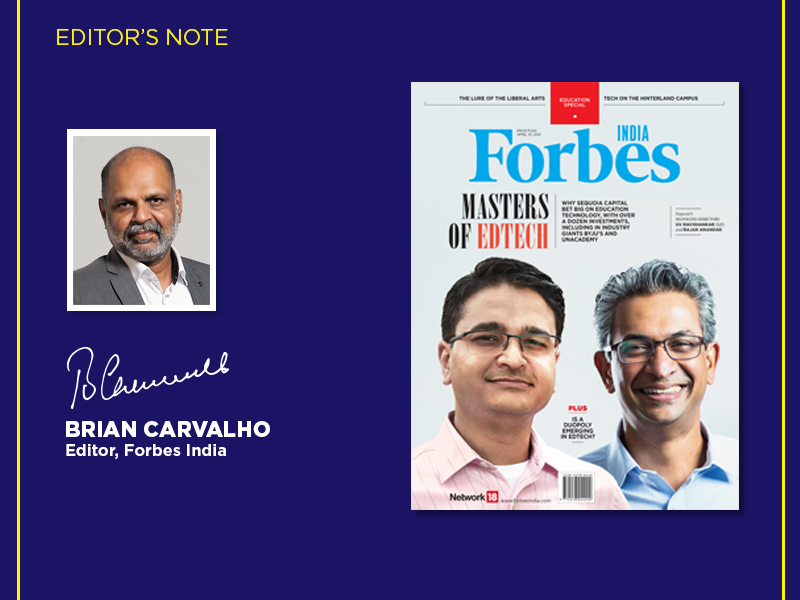 If you go strictly by what ‘edtech’ expands into, you’d realise that education technology goes back to the 40s, when computers entered school and college campuses to prepare youth for the world we live in. THE Journal, launched in 1972 and perhaps the first magazine to cover education technology, captured the journey of pre-internet edtech back in the late 90s.

It may have well begun with the MARK 1 in 1944 at Harvard. As THE Journal notes: “Early use of computers in education was primarily found in mathematics, science and engineering as a mathematical problem-solving tool…” Then in the early 60s, professors at Stanford established an R&D programme on computer-assisted instruction in math and reading, allowing students to correct their responses through rapid feedback. And, soon enough, powerful computers and high-bandwidth networks were helping take the knowledge and information to the world.

Today, edtech has evolved to include modern technological implementations, from massive open online courses and in-classroom tablets to interactive projection screens and whiteboards. And, in a pandemic-stricken world, as learning from home became the norm, broadband, laptops and smartphones became the gateway to education—at least for those who can access and afford them.

Edtech doubtless has been one sunrise on the wider bright horizon of pandemic-induced digital transformation. Entrepreneurs go where the opportunity is, and funders where the entrepreneurs are. But edtech is a bit different from, say, food delivery or ride sharing or leasing living spaces: It can’t be just about the marriage of technology and content. Which is why the origins of edtech can be traced back to institutions like Harvard and Stanford.

Forbes India’s special package this fortnight is on education—online and offline, school and home, urban and rural, real and fake. Our cover story is on a venture capital firm that entered the sector early, perhaps before it was a gleam in most Veecee’s eyes. Sequoia’s first edtech funding round took place almost 15 years ago, but it wasn’t until a decade later that it could claim to have got the education bit between its teeth. And that’s because, as Sequoia India’s Managing Director GV Ravishankar tells Rajiv Singh, who has penned the cover story, most entrepreneurs in the first wave may have had the tech education but little background in educating.

Sequoia stayed the course, and it’s a different story today, as it sits pretty on over a dozen investments in edtech, including the two 800-pound gorillas, Byju’s and Unacademy, and a handful in Southeast Asia.

Another big edtech story is on the rise and rise of Byju’s and Unacademy, both of which are widening the gap from the rest of the pack with dollops of funding and a never-ending string of acquisitions. Are we looking at the emergence of a duopoly in edtech? Naini Thaker and Naandika Tripathi, who take stock of the action, have an answer: There will be consolidation, but that won’t stop new players from entering the lucrative fray.

What good are entrepreneurial ambitions and the billions of dollars fanning them if the bulk of India’s students cannot benefit from them? When over 10 lakh government schools were forced to go online last March, millions were left out of the learning process, as they lacked access to digital devices. Divya Shekhar captures this grim reality, and what a handful of non-profits—along with a few edtech majors—are doing at the grassroots to bridge this widening gap.

Tweets by @forbesindia
Time spent with yourself is the greatest gift: Manish Malhotra
Photo of the Day: Holy month amid a pandemic