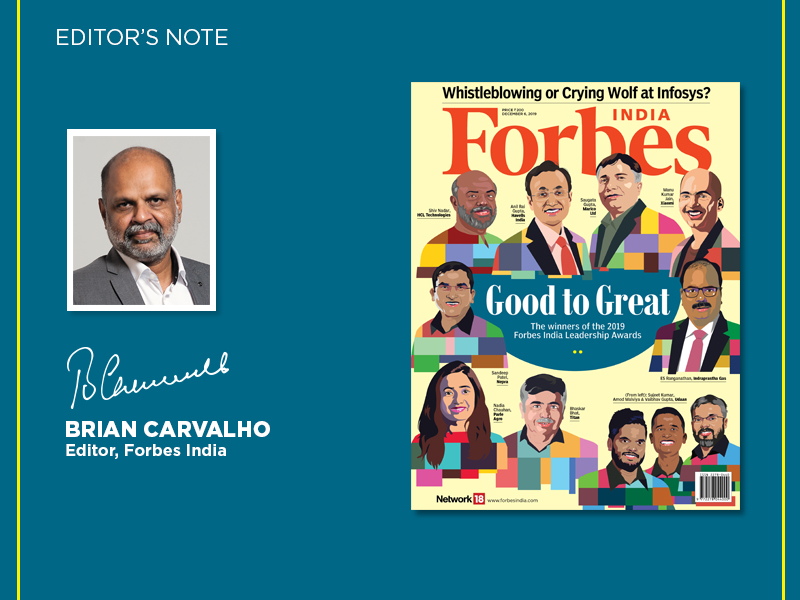 Lists abound of the greatest leaders of the modern world. The names may vary here and there but a handful make it to most of such lists. Bill Gates makes the cut, as might Walt Disney; but most conspicuous are those who changed the destiny of nations and their people by challenging the status quo, articulating a vision and inspiring millions to work towards executing it. Think Martin Luther King Jr, Mahatma Gandhi and Nelson Mandela—and, if charisma, empathy and the ability to drive change (via armed struggle, in this case) are essential attributes of leadership, the countercultural icon of rebellion Che Guevara cuts the mustard, too.

Gandhi or Guevara or Gates, leaders across the spectrum—from politics to sports to business—share common attributes. And it’s these traits that are in ample display in the winners of the Forbes India Leadership Awards 2019.

Honesty coupled with the ability to inspire people is one of them. Our winner for Best Multinational CEO, Xiaomi’s Manu Jain, displayed plenty of that. “We made a lot of mistakes in our offline journey,” he tells Rajiv Singh. The context: Xiaomi’s attempt to take the online-only brand offline, for which it tried and erred more than once by following what others were doing. Jain eventually decided it was time to devise his own strategy and exhort his team to play by the rules laid down by him. The results have been spectacular.

The recognition of the need to empower is also what sets apart winning leaders from the rest of the pack. If Saugata Gupta is the Best Private Sector CEO this year, a part of the credit should go to Marico founder Harsh Mariwala. As Salil Panchal writes, Gupta was three years in Marico when Mariwala reckoned he had found the man to lean on in the transition from a family-run commoditised business to a professionally-run consumer products entity. Almost five and a half years after the board appointed Gupta as CEO, Mariwala has adequate reason to pat himself on the back.

Great leaders, to be sure, have a good gut, and back that up with perseverance and the willingness to stay the course. The winner of the award for Lifetime Achievement, the 74-year-old Shiv Nadar, fits in that mould. He is, after all, the man who in the 70s saw the advent of the microprocessor, which drove him to launch HCL in 1976. “I have a strong instinct, but most of the time it is backed by some solid work,” Nadar tells Harichandan Arakali in a rare interview.

There are other winners too, from this year’s Outstanding Startup and GenNext Entrepreneur, to the Entrepreneur with Social Impact and the crowning glory—the Entrepreneur For the Year. I won’t give away any more. The package on the Forbes India Leadership Awards helmed by Panchal, who also put together a stellar jury to pick the winners, the awards are Forbes India’s way of honouring the outperformers in Indian business at a time when the going has been tough. But you know who gets going at such times…

The big story of this issue is Infosys’s by-now frequent run-ins with whistleblowers—since 2017, the IT services giant has been at the receiving end of at least six anonymous emailed complaints of misgovernance. Kunal Talgeri dives deep to explore whether such frequent blowing of the whistle may be a case of crying wolf.