'Sanitiser sales have zoomed, but profit is far': Scott Edil

The issue, the pharma company says, is that the government has capped the price on sanitisers but not on raw materials 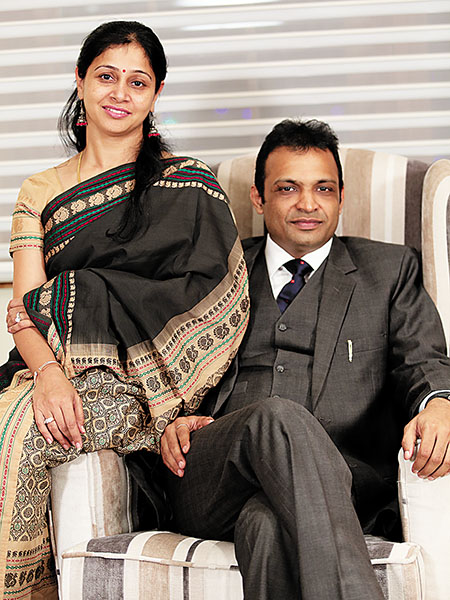 Vaishali and Sanjeev Aggarwal of Scott Edil, which sold 15 lakh bottles of sanitisers in March

Coping with rising demand has been tough for makers of hand sanitisers, given that most consumers have been panic buying. The main concerns—for large FMCG companies as well as small players—are the same: Procuring raw material during the lockdown.
Some 45 distilleries have been granted permission to produce hand sanitisers, according to a March 26 release from the Ministry of Consumer Affairs, Food and Public Distribution. This is in addition to 564 other manufacturers who got the go-ahead. Besides, local schools and institutes like the IITs have begun to produce their own do-it-yourself hand sanitiser variants.
In this series, Forbes India speaks to sanitiser manufacturers—large and small, old and new—across India to find out how they’re coping.
One night, soon after the coronavirus pandemic hit India, Vaishali Aggarwal, technical director at the Chandigarh-headquartered Scott Edil got a frantic phone call from one of the city’s chemists in Chandigarh, “Madam, sara sanitiser ka stock bik gaya!” (Madam, we have run out of stock for the sanitiser).” That was just the first of what would be hundreds of such desperate dial-ins over the next few days.

Till then, Scott Edil’s primary focus was on oral liquids and injections. Now it is sanitisers. “Sanitisers were always a part of our product portfolio, but earlier the sales were about 20,000 bottles per month. And now, in March alone, we have sold 15 lakh 100 ml bottles,” says managing director Sanjeev Aggarwal.

The story of Scott Edil goes back to the mid-70s when 21-year-old pharmacist Balram Kishan Aggarwal, who ran a small chemist shop in Kurali in Punjab, saw a massive business opportunity in pharma manufacturing. In 1995, after the company got a licence, Scott Edil set up a small facility manufacturing external preparations like ointments, creams and lotions in Chandigarh.

In 2005, the company set up its first unit in Baddi in Himachal Pradesh. As their operations grew, Scott Edil set up another unit there. In 2017, the company acquired Alembic Pharma’s Baddi facility, which has one of the largest liquid manufacturing capacities in the country. Today, the company has four manufacturing facilities in Baddi.

Although they launched sanitisers about five years back, the Aggarwals never dreamed of demand like this—that too for a product that only brought in 0.5 percent of its total revenue. “In order to fulfil the demand, we had to get another licence for one more facility. Currently, we are manufacturing 400,000 bottles daily,” adds Vaishali Aggarwal, the wife of Sanjeev Aggarwal.

Paradoxically, though, although sales have zoomed northward, the sanitiser segment barely manages to show profits. Reason? A price-cap on sanitisers, as directed by the Ministry of Consumer Affairs, Food and Public Distribution. “The issue is that they [government] have put a cap on sanitisers but not on the raw materials,” Aggarwal explains adding that the company can no longer pass the price on to the customers. “Earlier our MRP for the 100ml bottle was ₹150, which we had to bring down to ₹50. And it costs us ₹45 to make one bottle, so there is barely any margin left.”

Scott Edil may have now have to count on a high-volume, low-margin strategy as demand picks up, not just in India but from across the globe. It is now seeing demand for sanitisers from countries like Saudi Arabia, the United Arab Emirates, Ethiopia, Tanzania and Sri Lanka. However, as the MD points out, “Due to the ban on exports, we are unable to sell sanitisers—an essential commodity worldwide—to our customers abroad. I believe the government should have allotted at least 25-30 percent for exports.” Aggarwal, though, is quick to point out that it’s not only sanitiser exports that have been banned at this time. “Apart from sanitisers, the Directorate General of Foreign Trade has banned export of surgical and disposable masks, all ventilators and textile raw material used for making masks as well.”

Meanwhile, as demand spurts, IPA, a key raw material in sanitisers, is in short supply, and Scott Edil has started looking for alternative raw materials like ethanol that are approved by the World Health Organization (WHO). WHO regulations stipulate that IPA content in sanitiser formulations should be 75 percent.

So what’s the future for sanitisers once the Covid-19 crisis subsides? Says Vaishali Aggarwal: “We have received great feedback for our sanitisers. So we will not only continue production, but will also market it more aggressively going forward.” She adds jokingly that they might start calling Scott Edil a ‘Hand Sanitiser Company’ since that’s all they are producing these days.