Companies across sizes and sectors are tapping into the increasing demand for hand sanitisers, but survival in a crowded market will be an uphill task 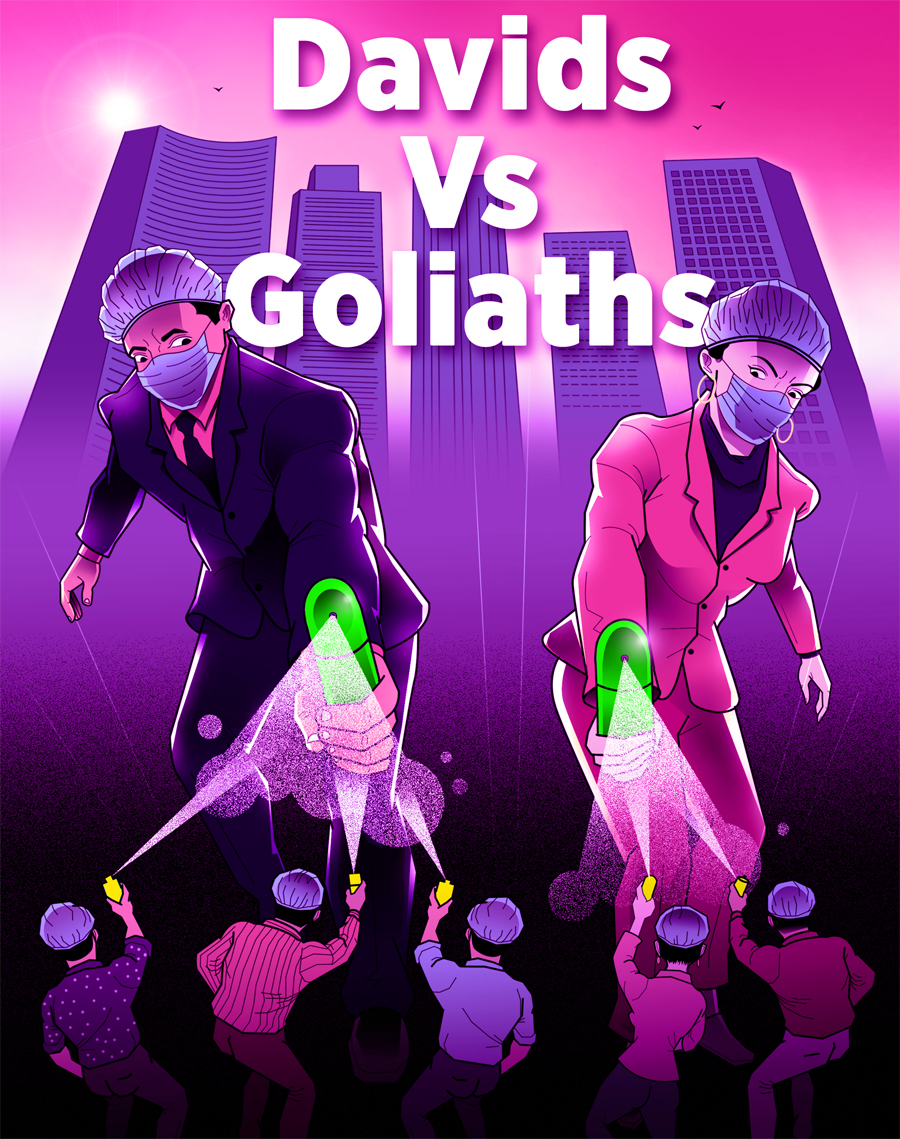 Nitin Totla recognises a business opportunity when he sees one. After dabbling in multiple small-scale ventures in the manufacturing industry, including making e-rickshaws, renting out JCB machines and forging metal, the businessman from Indore turned towards the sanitiser market earlier this year. When a nationwide lockdown to tackle the spread of the coronavirus was announced in March, the 48-year-old saw people frantically buying hand sanitisers to prevent infection, and there was a huge gap between demand and supply. Without wasting time, Totla set up Farmacium India Pvt Ltd to secure his place in the growing personal hygiene market.

A report by data analytics company Nielsen India states that as many as 152 new players entered the sanitiser manufacturing market in March. Totla’s brand, ‘Dr Sanitizer’ was one of them. The businessman’s strategy to survive the competition was to meticulously follow World Health Organization (WHO) guidelines, which mandated that sanitisers must have over 70 percent alcohol content to be effective. One bottle of Dr Sanitizer contains as much as 80 percent alcohol, and Totla manufactures sizes ranging from 90 ml to 50 litres. Declining to reveal sales or revenue numbers, Totla explains that he sells to various government offices across Madhya Pradesh.

“I know sanitiser manufacturers who add 10-20 percent alcohol but claim it has over 70 percent. Those sanitisers are easily available but don’t solve the purpose,” he tells Forbes India. Given an encouraging initial response, Totla—whose friends from the local hygiene and alcohol market of Indore helped him with the technical knowhow—is now planning to start retailing his product.

There were two main reasons for new players to enter this market, according to Charu Sehgal, partner and leader, life sciences and health care, at Deloitte India. “First, the huge demand for and the relative ease in making sanitisers made sure many new players entered the industry. Second, a lot of small-scale players who lost their regular business entered this space,” she says. 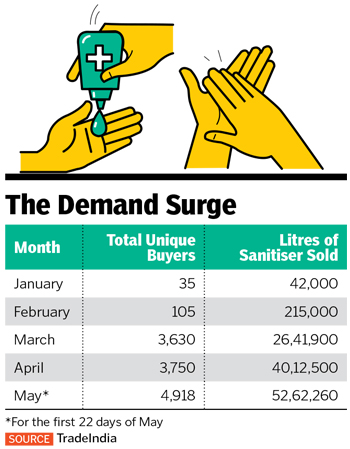 Experts, however, believe the sanitiser market is unlikely to remain so crowded in the long run: While a few players are in this business with a vision to stay and expand, others, particularly the smaller ventures, have entered the market only to reap the benefits of the sudden surge in demand and profit margins created by the pandemic, and are likely to exit as soon as things normalise.

Since mid-April, the company has sold approximately 200,000 units of sanitisers, priced at ₹250 for 500 ml and ₹2,500 for five litres. “As new entrants, we were able to develop a product that was purpose-built to address the [need created by] Covid-19 pandemic,” Ahluwalia says, explaining that he was able to leverage the existing supply chain and distribution networks built by his company over the years to help the sanitisers reach the market more efficiently.

Legacy FMCG players like Marico who have entered this space in the last two-odd months believe their brand equity and recall will help them carve a niche in the sanitiser market. The company has launched a sanitiser in April under its 50-year-old brand Mediker, which currently offers hair oil and anti-lice treatment shampoo in the personal hygiene portfolio.

“While this launch was already a part of our plan, the timelines were moved up in order to meet the hygiene demands of consumers during the crisis. The product was launched in record time, keeping in mind the urgency of the situation and the need of the hour,” says Koshy George, chief marketing officer, Marico.

The company also launched Veggie Clean in April—a fruit and vegetable cleaner containing no harmful preservatives, soap, chlorine or alcohol—when it realised that people were looking for ways to sanitise fresh produce without chemicals.

Other players in the market include distilleries, who have easy access to the extra neutral alcohol (ENA) that is required to make sanitisers. According to a Livemint report, the consumer affairs, food and public distribution ministry on March 26 stated that it had already given permission to about 45 distilleries to start manufacturing sanitisers, and was likely to grant permission to about 55 more.

That is how Diageo India, among the largest alcohol manufacturers in India, joined the bandwagon in March with an aim to produce around 300,000 litres. Separately, the company, as part of its corporate social responsibility (CSR), is also donating about 500,000 litres of ENA.

Alcohol manufacturing giant Radico Khaitan also started supplying to government authorities and primary health workers as part of their CSR programme. Soon, however, the company realised the business potential of the segment, and set its sights on a commercial product. “The use of sanitisers will be an essential part of our living now,” says Amar Sinha, chief operating officer, Radico Khaitan.

The manufacturing process came with its own share of challenges. “Every organisation is used to a plan, a prediction, and a capacity they have created. Smaller organisations can get up and start producing whatever they want, [but] for larger organisation the constraints are greater,” says Sehgal of Deloitte. Some of these challenges included overcoming transport restrictions, procuring PPE kits for the staff, maintaining social distancing in factories etc.

The survival game
According to the Nielsen India report quoted above, the market share of three dominant brands—Dettol, Lifebuoy and Pure Hands—fell from 85 percent in January and February to 39 percent in March. This was not because of lack of sales, but due to an unprecedented rise in demand and panic buying among consumers, where they settled for a product without caring much about the brand.

Even with the growing competition affecting their overall market share, established sanitiser brands stand to benefit because of economies of scale and volume, given that the government has capped the price of sanitisers at ₹0.5 per ml. “In future, a lot of the demand will come from institutional buyers. The larger, established players will be able to capture that market because buyers would want to go to just one or two suppliers,” says Sehgal.

Arjun Ranga, managing partner at Mysuru-based N Ranga Rao & Sons, producer of the Cycle brand of agarbattis and a new entrant in the sanitiser segment, believes it is only a matter of time when the traditional leaders re-capture the market. “Local players like me have come up during this emergency and the market has welcomed us, but in the long term, we can’t survive with only this. These [dominant] players will come back, maybe not to the 85 percent market share they had earlier, but they will regain a significant share they have lost,” he says. Ranga is drawing on the seven-odd decades of experience his company has in working with perfume fragrances and agarbattis to produce a range of ayurvedic sanitisers certified by the ayurveda, yoga and naturopathy, unani, siddha and homeopathy (Ayush) ministry.

Other smaller players agree that capturing and retaining market share will be an uphill task. “Our strategy will be that which has already given us considerable success in the first few months [of operations],” says Ahluwalia. “We will innovate and develop purpose-built products and delivery systems that cater to the evolving need of consumers. We would also like to look at specific areas of usages. For instance, creating a product that helps in disinfecting shoes as you enter a building.”

Totla’s survival strategy is to develop PPE kits made of surgical cotton, and expand offerings to include disinfectants and floor cleaners. George of Marico says the company will explore innovations in the health foods segment, since the global shift towards them seem like a permanent one. With public hygiene standards becoming more stringent, there will be innovations in sanitiser dispensing mechanisms too, says Rajiv Gupta, country business leader, health care business for 3M India, a hygiene product manufacturer. The company claims to have seen a huge surge in demand for their range of hand sanitisers, for which the manufacturing capacity of their plants was “increased by about 50 percent”.

Ahluwalia believes that with its robust R&D systems, India has the potential to create more advanced sanitisers and delivery mechanisms. “Globally, companies can take a page out of Indian manufactures’ books and develop economic solutions to serve and reach all segments of society.”

Tweets by @forbes_india
EMI-linked products are getting popular. But can people repay?
Photo of the Day: An opera for plants