How big? The last startup that had Michael Moritz and John Doerr on the same board was Google 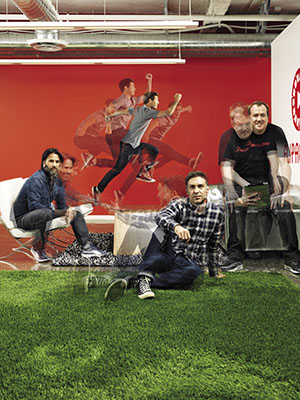 Farhad Mohit wasn’t panicking (he’d started and sold two websites before), but at the end of 2013, the entrepreneur realised his startup was going to run out of money by February. Two days before Christmas, his wife gave birth to their second child at home, with the midwife stuck in traffic. He promised his wife that, if the company ran out of cash, he would stop adding more of his own to keep it going.

But Mohit’s prospects were not as grim as the bank account indicated. His startup owned an app called Flipagram, which lets people make ‘Flips’, a mashup of videos, photos, text and 30-second snippets of hit songs. Starting in October, a series of updates to the app, including making it free, were already pushing Flipagram up the app charts. By the time his baby arrived, Flipagram had reached No 1 in iPhone downloads in 87 countries and had millions of users per month. Before Mohit even had a chance to hit up new investors, Sequoia Capital called to meet right away. Too busy, Mohit pushed it into January, when Sequoia sent its billionaire partner Michael Moritz and colleague Tim Lee to Los Angeles to meet Mohit at his home, which doubled as Flipagram’s office. They chatted over a homemade lunch of Persian food. By February, Sequoia, Kleiner Perkins Caufield & Byers and Index Ventures combined to invest $70 million. What they wanted was a piece of the next social growth monster. By the end of 2014, Flipagram was up to 30 million users per month. Facebook took at least three years to get that far. Snapchat took two years.

Flipagram did it in one. The app is still in the top ten of photo and video apps by iOS downloads in the US, and the number of Flips made in the app rose by 165 percent from the third quarter of 2014 to the same period this year. “The [music labels] really believe that Flipagram will be a major media creation and sharing company on the order of a Twitter or more,” says board member John Doerr of Kleiner Perkins. “Farhad is visionary.” Flipagram’s big insight was that people want a way to make videos faster than one can post on YouTube and with more creative freedom and depth than Twitter’s Vine or Facebook’s Instagram.

“It’s a human thing,” Mohit said. “Everyone has stories worth telling.” Flipagram’s big difference is in letting people add 30-second snippets of music (increasing to 60 seconds as of December) to their videos from a searchable catalogue of tens of millions of tunes. Mohit used some of that $70 million to strike global licencing deals with nearly all of the major record labels and publishers. Instagram doesn’t let users add music to videos within the app. Vine limits users to a small set of featured music or music they own. Flipagram also adds a prominent link to buy the entire song on iTunes or Spotify.

Not surprisingly, recording artists have taken to Flipagram mightily. Garth Brooks, for example, posted a Mother’s Day video on Flipagram and that weekend got 17,000 likes, comments and shares. The identical Flip got only 10,000 on Facebook and about 8,000 on Instagram, even though he had 66 times more followers on Facebook and five times more followers on Instagram. A recent Flip by Britney Spears dancing in the car with her children got half a million views.

While you can find serious content like remembrances or videos of the Paris terrorist attacks, most of what you see on Flipagram is a stream of holiday trips, teenagers dancing in their rooms and how-to videos. Some users, called ‘Flipastars’, attract more than a million views to Flips about their dogs or families. Says Moritz: “You look at Flipagram, and you suddenly realise how small the audience is for American television.”

Mohit, a 46-year-old Iranian-born immigrant with a salt-and-pepper beard and jet-black hair, oversees this burgeoning realm from an inconspicuous office on Santa Monica Boulevard in Los Angeles. Two open steamer trunks filled with vinyl records inherited from his mother are pushed against a wall next to a few unhung paintings. “We’ve designed this for mass visual storytelling. Every man, woman and child should be able to use it,” Mohit says, speaking quickly and intently. “And they don’t have to be literate, just have the ability to tap. I’m more interested in the life of a sex worker from the eyes of a sex worker.”

Mohit left Tehran at the age of nine with his family, fleeing the revolution for France and England before settling in southern California. He took math and applied science at the University of California, Los Angeles and went into consulting before getting an MBA from Wharton. In 1996, just before he graduated, a class project grew into Mohit’s first company, Biz Rate, one of the first online business ratings sites, which then spawned retail site Shopzilla, whose price-comparison feature made it one of the largest shopping search engines in the world. Mohit led the sites to profitability while the dotcom bubble popped and sold both sites for $525 million to Scripps in 2005.

He went on to start a series of failed social media apps, mostly self-funded. When the last one, a positivity app called Cheers, ran out of momentum, Mohit told his team he was flat out of ideas. His chief technology officer, Brian Dilley, introduced Mohit to Josh Feldman and Raffi Baghoomian, who had made a 99-cent iOS app called Flipagram in their spare time while working day jobs at a digital ad agency. The four met in September 2013 at a sushi place in Studio City and hit it off. Within a few weeks, Mohit bought Flipagram for an undisclosed amount. Over the next month, the four co-founders made the app free, simplified the interface and added a Flipagram branded “watermark” that shows up on all videos. The changes paid off in app downloads and the number of Flips created, fetching the startup its $70 million venture round.

Mohit has had to answer some nettlesome questions after Flipagram laid off 17 people, about 20 percent of its employees, in October, a move that fast-growing startups don’t often make. He said most of the cuts were a result of automating product-testing jobs. A person close to the company said that Flipagram cited poor user retention and that high legal fees and music-licencing costs were also a factor. Flipagram says the source was misled but declined to comment further. It does say that user numbers are up from its last announcement of 33 million.

Mohit says the next big move is to turn his creation tool into a real social network and build a relevance algorithm that shows users the right Flips at the right time. Revenue is still a secondary concern. The startup makes a bit of money through a one-time $1.99 fee users can pay to remove the Flipagram watermark and referral fees for song sales on iTunes. Facebook and Twitter will take aim at Flipagram (or try to buy it), and Mohit faces competition from new apps such as Musical.ly and Dubsmash. “We’re just at the beginning of a huge vision,” Mohit says. “It’s going to have its bumps.”

Tweets by @forbes_india
What India Inc could gain from the Paris climate summit
India can do impressive things: Lawrence Summers