Your flying car is finally here

With nearly a billion dollars in funding, Joby Aviation promises to have its air taxis aloft by 2023 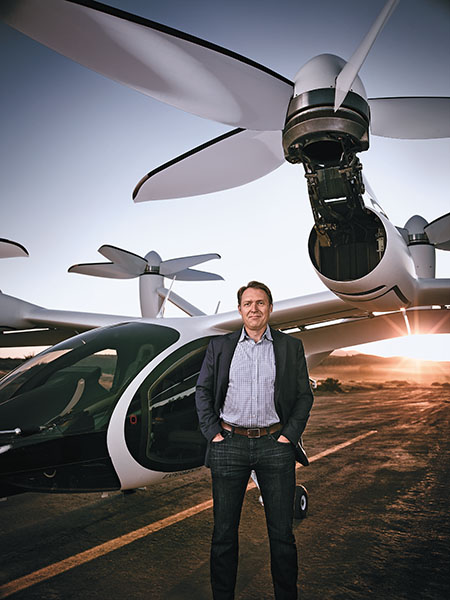 Joby Aviation founder JoeBen Bevirt with the final prototype of his electric tiltrotor aircraft— the product of 11 years of work, nearly all of which was engineered in-house
Image: Ethan Pines for Forbes

JoeBen Bevirt first thought about building an airplane that could take off and land like a helicopter in second grade while trudging up the seven km road to his family’s home in an off-grid hippie settlement among the redwoods in Northern California. “It was a lonnnnng hill,” Bevirt says, laughing. “It made me dream about a better way.”

Four decades later, Bevirt is closing in on that goal. On a ranch outside Santa Cruz, California, the surfing magnet near where he grew up, Bevirt has secretively developed an electric airplane with six tilting propellers that he says can carry a pilot and four passengers almost 400 km at up to 320 km/h, while being quiet enough to disappear among the hum of city life. He envisions the as-yet-unnamed aircraft, which experts speculate could cost $400,000 to $1.5 million to manufacture, as the foundation for a massive rooftop-to-rooftop air-taxi network—one he plans to build and run himself. His aspiration is to free urbanites from snarled roads and save a billion people an hour a day at a cost (he hopes) on par with booking an UberX, or about $1.60 per km.

It sounds crazy, but Bevirt, 47, has some powerful believers. Toyota pumped roughly $400 million into his Joby Aviation in January, joining investors, including Laurene Powell Jobs and Jeff Skoll’s Capricorn Investment Group, which was also an early Tesla backer. In all, Joby has raised $745 million, most recently at a valuation of $2.6 billion. Toyota CEO Akio Toyoda told Bevirt he hopes, through Joby, to realise the flying-car dreams of his grandfather Kiichiro, Toyota Motors’ founder, who developed aircraft before World War II.

Joby is the best-funded and most valuable of an explosion of startups leveraging advances in batteries and electric motors to try to wean aviation off fossil fuels and create new types of aircraft, including autonomous ones, to serve as air taxis. No one knows how big the industry could get—or if it will get off the ground at all—but Wall Street is spitballing some big numbers. One report from Morgan Stanley estimates the category could generate $674 billion a year in fares worldwide by 2040.

“If we can fly, we can turn our streets into parks and fundamentally make our cities much nicer places to live in,” Bevirt says. 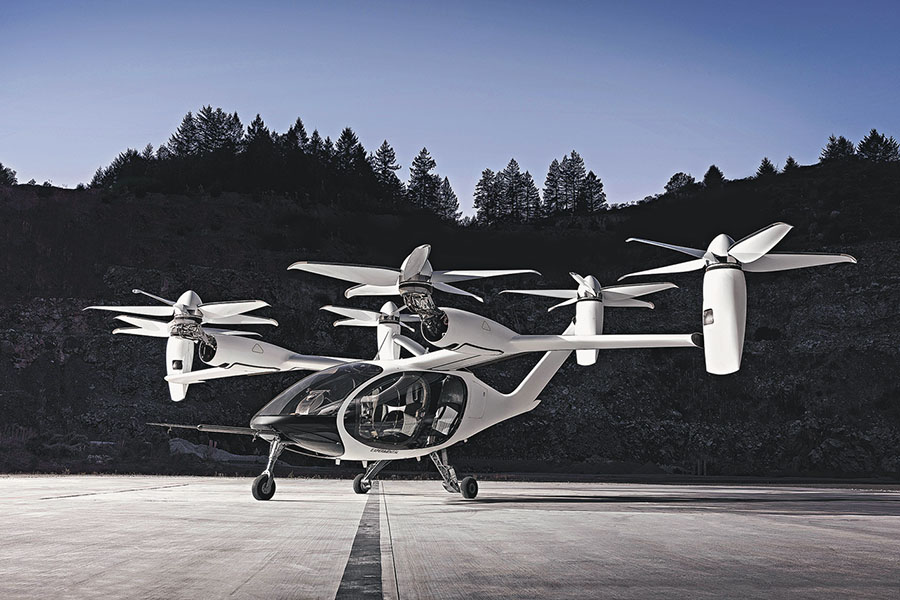 Joby’s aircraft has six propulsion units that enable it to stay aloft even if a motor fails. The propeller blades are shaped to make it quieter than a helicopter when taking off or landing vertically, and virtually silent when tilted forward in flight
Image: T Revor Jolin

Dreamers have been trying (and failing) to build flying cars for 100 years. Sceptics think Joby and its competitors are still at least a decade too early: Today’s best batteries pack 14 times less usable energy by weight than jet fuel. Given how much brute power is needed to propel an aircraft straight up, they say, until batteries improve, electric air taxis will have too little range and carrying capacity to make business sense. Then there’s the tough task of convincing regulators they’ll be safe to fly.

Bevirt says he can produce a viable, safe aircraft now with the top-of-the-line lithium-ion battery cells that currently power electric cars. And Joby is the only startup to commit to Uber’s ambitious timeline of launching an urban air-taxi service in 2023. Bevirt says he’s on track to win safety certification from the Federal Aviation Administration that year, which would likely make Joby the first electric air-taxi maker to clear that daunting hurdle.

Bevirt was raised in a back-to-the-land community in which he got an early education in engineering, helping fix farm equipment and building homes alongside his father, Ron Bevirt, who was one of the LSD-tripping Merry Pranksters back in the 1960s. (JoeBen is named after a character in Sometimes a Great Notion, written by Pranksters ringleader Ken Kesey, famous for One Flew Over the Cuckoo’s Nest.)

As an adult, Bevirt recreated that community with a decidedly capitalistic twist on his secluded 178 hectares of woodlands and meadows overlooking the Pacific. The property, which he purchased with the proceeds from selling earlier businesses—such as Velocity11, which built liquid-handling robots used for testing potential drugs, and the company behind GorillaPod, a flexible camera tripod—includes a former quarry where Bevirt conducted test flights. Employees have lived in small cottages on the property and built houses nearby. Before locking in on developing an aircraft, he incubated other startups there, with everyone working together in a cavernous barn. Bevirt started an organic farm to feed them, with chickens and bees yielding eggs and honey, and hired a chef to prepare it all.

“It’s a high-fiving, hugging culture, and that really flows from JoeBen,” says Jim Adler, managing director at Toyota AI Ventures, who convinced his colleagues to invest in Joby in 2017. “He’s high-energy, and it’s contagious.”

A big part of Bevirt’s business model involves running his own ride-sharing network. That helped attract investors. “If it was just a vehicle, I would not have been moved to invest if there wasn’t a service wrapped around it,” Adler says.

Building the required landing pads, booking software and other infrastructure, though, will require a lot more cash—and patience—from investors. Joby has no plans to sell its aircraft outside of building its own fleet, further delaying the day when investors can recoup the billions required to scale up.

size: Weight. A big part of that heft comes from the batteries, and it’s unclear if they’ll have enough juice to do the job, according to modelling by the lab of Carnegie Mellon battery expert Venkat Viswanathan, based on aircraft specs Bevirt shared with Forbes.

For Joby to achieve the 240km range it says the 2,180 kg gross weight aircraft is capable of (but has yet to achieve in flight testing), plus FAA-required reserves, Viswanathan’s team estimates it needs a 1,000 kg battery pack. Subtracting roughly 450 kg for five passengers leaves only about 730 kg for the airframe, seats and avionics—a slim 33 percent of gross weight. That’s 35 percent lower than any certified production airplane. The upshot: Either Joby has built an unprecedentedly light and efficient airframe, as Bevirt maintains, or its range will turn out to be lower.

Another concern: Getting approval from the FAA might require safety tweaks that weigh it down.

“What we’re doing, it’s an insanely hard undertaking,” Bevirt says. “Not only the technical challenge of the aircraft [but] then changing the way everyone on Earth moves around on a daily basis.”

Tweets by @forbes_india
The SAT fails its biggest test
Did You Know: You are at your productive best on Mondays