Bay to Baug: Mumbai's luxury hotspots go across the sea 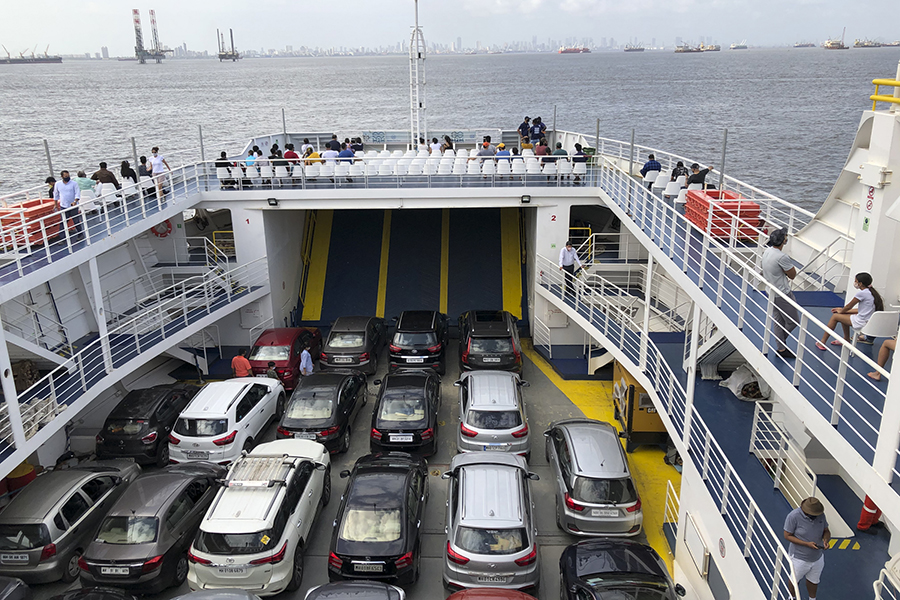 Cars travelling between Alibaug and Mumbai on the RoRo ferry
Image: Mexy Xavier

Every morning, a car leaves Magazine Street Kitchen, the 2,500 sq ft co-cooking space in Mumbai’s Byculla owned by foodpreneurs Gauri Devidayal and her husband Jay Yousuf, and zips to the nearby ferry wharf from where the spanking new, all-season, roll-on-roll-off (RoRo) ferry sails off to Mandwa jetty, the gateway to Alibaug. In 50 minutes, as the RoRo drops anchor at its destination, Devidayal is at the parking lot waiting for her staff member to disembark and hand over an insulated bag stacked with food from Iktara, the Magazine Street Kitchen  bakery and Miss T, the ventures in her portfolio. With nine packed orders the day we meet her, she drives back to her farmhouse in Sasawane, about 15 minutes from the jetty, and sends out WhatsApp messages about the arrival of the food and her location pin. Soon thereafter, diners trickle in in cars for pick-up.

It’s a routine Devidayal has been following since July, when a friend jokingly asked if she could get her food in Alibaug and she thought, “why not?” She put up her menu on the local WhatsApp group and with the overwhelming response that followed started a weekly service by road. On August 20, the RoRo launched, “and it became a game changer”, says Devidayal, reducing travel time from over three hours to less than an hour. From once a week and just her bakery, she now ships daily and from all of her brands (except her first and probably most well-known, The Table in Colaba, “as the food on its menu doesn’t travel well”). “Almost all of our clientele is from Mumbai, people who have turned Alibaug into their first home during the lockdown months,” she says. “Our revenues from Alibaug delivery have grown by 500 percent.”

Devidayal herself belongs to the troop of Mumbaikars who have shifted base to Alibaug— often called Mumbai’s answer to The Hamptons for being the preferred retreat of the city’s swish set—during the pandemic months. She and her family first came for a weekend and ended up staying for several weeks. Between chasing her seven-year-old daughter for her online classes and her own work calls and Zoom meetings, Devidayal digs the privilege of daily walks, green patches and clean air that Alibaug affords her, a far cry from the frenzied pace of Mumbai. 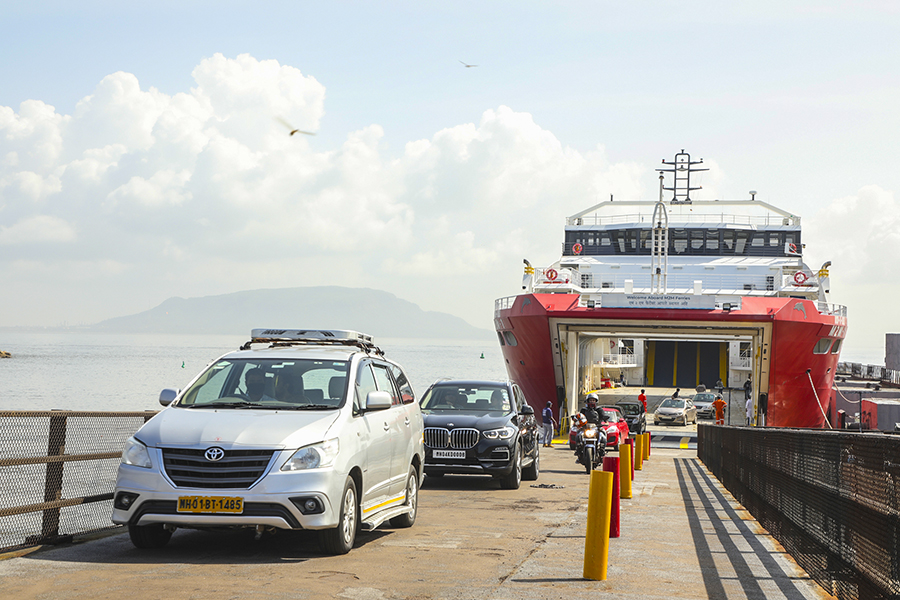 The ferry, which carries both cars and passengers, reduces travel time between the two places by over two hours
Image: Mexy Xavier

Alibaug has similarly turned on its head the daily routine for Aditya Munim, the managing director of McLube Asia Pvt Ltd, who came here in March and stayed on. With an early start at 6 am, Munim walks, swims and nurtures hobbies, while also catching up with his Mumbai office that starts at 8, with Europe post-lunch and the US late in the evening. “Without the traffic and the commute, there’s always time for everything,” he says.

Besides those that have homes already, Alibaug has also seen an uptick in guests booking luxury villas for long stays, for anywhere between four and seven days instead of the earlier weekends. SaffronStays, which offers serviced private villas and estates on rent and has 30 such properties in Alibaug, is booked out for October. “Guests these days look for the luxe factor. For them, we are in the middle of launching an uber-rich brand called Xanadu—two such properties are in Alibaug and come for ₹70,000+ per night. Even before we have launched officially, we are getting inquiries for this,” says Devendra Parulekar, founder.

(Left)Alex Sanchez, chef and owner of Americano, sends out an average of 10-15 orders in a refrigerated vehicle to Alibaug every Friday; Orders from Mumbai being loaded onto restaurateur Gauri Devidayal’s car at Mandwa jetty in Alibaug
Images: Mexy Xavier

With chic Mumbai seeking refuge in Alibaug during the Covid-19 outbreak, a clutch of top-end restaurants from the city, like Devidayal’s, is foraying into it to bring to its newest set of residents a taste of the Maximum City minus its grunge. For most of these restaurants, Alibaug now is merely an extension of their Mumbai market—but also a new revenue channel at a time earnings had dried up due to the Covid-induced shutdown.

That Alibaug had an F&B market waiting to be tapped was evident for Keenan Tham, founder and managing director of Pebble Street Hospitality that owns restaurants like Koko and Foo, when he was locked down in the coastal town for three and a half months with limited dining options, let alone premium ones, and pined for Mumbai’s food. “I started getting the restaurant food for myself, then my friends, and eventually decided to make it a proper offering,” he says. Tham has repurposed his Alibaug home kitchen to store the food that is being cooked and transported from Mumbai. “Earlier, we couldn’t do any raw stuff, no sushi. We sent dim sums with instructions on how to steam them. But with the RoRo, everything is much easier.” 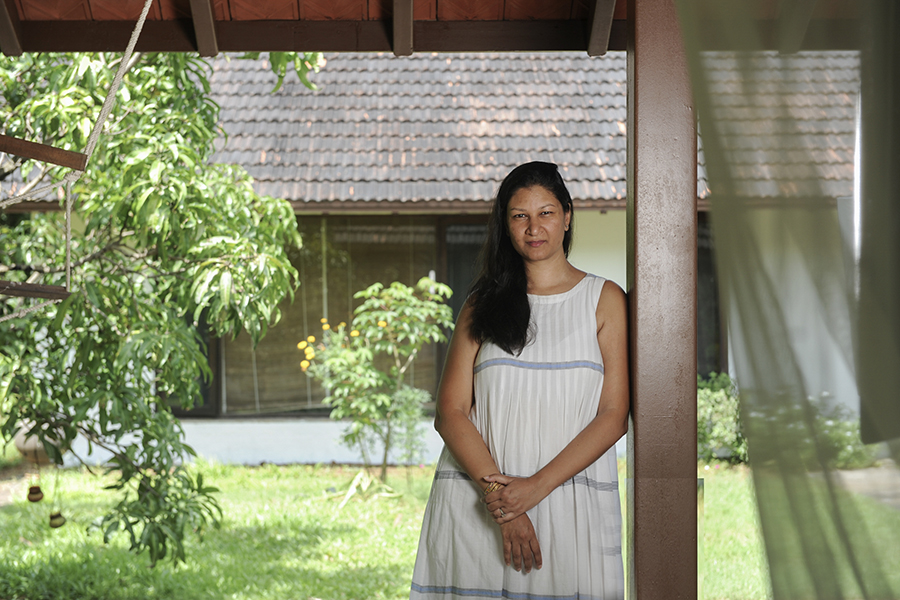 Will the food travel well? This is a question these restaurateurs have asked themselves repeatedly before taking the Alibaug plunge. A ‘restaurant experience’ that was much-desired by diners at premium outlets risked being ruined with outstation delivery. It made Masque gravitate towards comfort food—burgers, salads, Malwani—instead of its ingredients-driven, fine-dining menu, with the last mile expected to be assembled at the diner’s home for a semblance of freshness. “Our burgers have to be reheated at a certain temperature in an oven. If we are sending a salad, the ingredients have to be thrown together for the final mix just before eating,” says Prateek Sadhu, executive chef and co-owner, who’s doing an average of 20 deliveries every week.

The higher benchmarks of experiential dining forced Karyna Bajaj, the executive director of KA Hospitality that runs restaurants like Yauatcha, Hakkasan, Nara and CinCin, to invest a month’s R&D to prepare a pared-down delivery menu. It meant eliminating delicate chart-toppers like Yauatcha cheung fun, while leaning towards wok dishes or dim sums without a skin—like the water chestnut prawn roll that’s wrapped in spinach. And Alex Sanchez, the chef and owner of Americano, went through multiple trials of pizza doughs and pastas to ensure they tasted like the ones served at the Kala Ghoda outlet. “We underbaked the pizza slightly and put raw cheese instead of cooking it with the pizza. It turns out perfectly when it’s reheated in an oven or on the tawa in Alibaug. For burgers, I didn’t want to send raw meat, so we pre-seared them here and sent them medium-rare so that by the time our customers melted the cheese on it, it was perfect,” says Sanchez, who sends out an average of 10 to 15 orders every Friday. 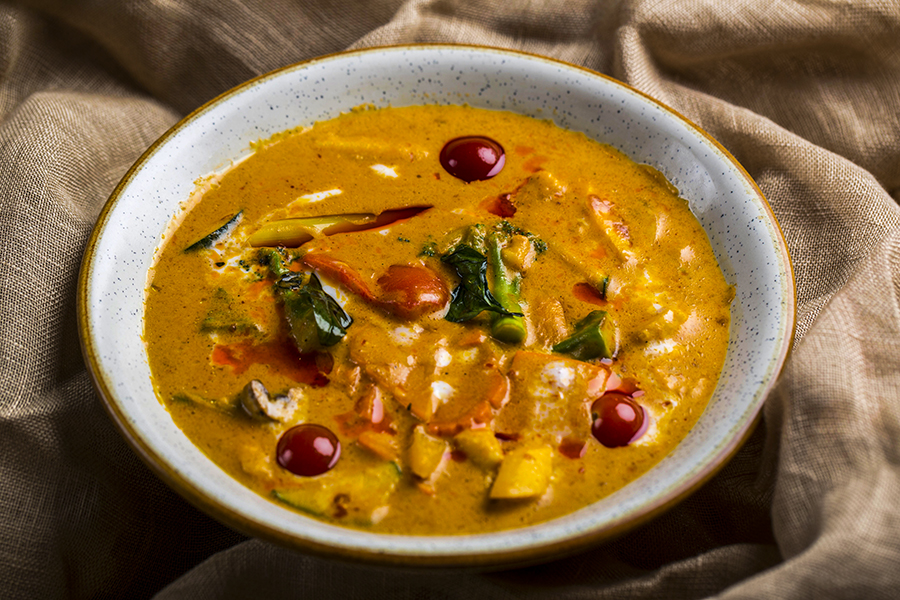 Despite laying the ground by perfecting delivery in Mumbai, and choosing to go via the road instead of the RoRo—so the entire journey can be done at 2°C in a refrigerated commercial vehicle to keep the food hygienic—Sanchez faced trial by fire on his first run on a day the region was awash in a torrential downpour. The promise of doorstep delivery fell flat due to inclement weather and multiple apologies later, he decided to organise a pick-up from a single point. “Now, everyone’s happy,” he says.

The challenging logistics of sending out deliveries on time in an area that’s geographically expansive is why Devidayal feels it’s necessary to have a base in Alibaug. “People underestimate how spread out Alibaug is and the bungalows are all over the place. There needs to be a lot of coordination in delivering across Alibaug,” she says. That she’s familiar with the lay of the land and has a car at her disposal allows her to drive up to her customers’ houses and deliver herself if there’s a hitch in the chain. 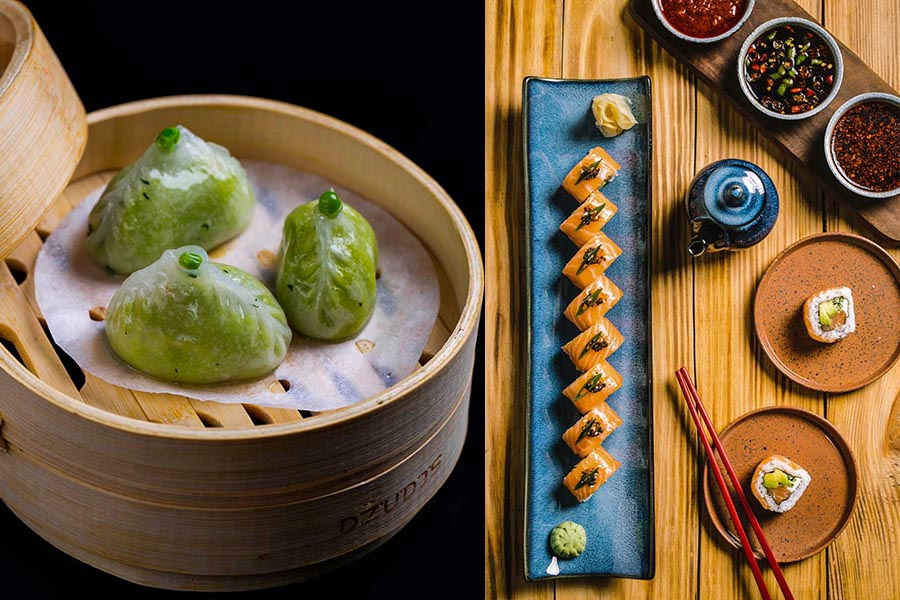 Starting deliveries in Alibaug has also helped Janki Thackersey, a self-taught baker who began a home-based venture, Flour Girl, in Mumbai in December, graduate from weekly menus to large birthday cakes. As a stringent lockdown forced birthday celebrations to turn muted, Thackersey, who had moved here to be with her in-laws, received a request for a cake from a friend. “It helped me expand my repertoire and I realised I really enjoyed making birthday cakes. This week, I made four and three the previous week,” says Thackersey. She initially had trouble sourcing ingredients, but once the RoRo launched and travelling to Mumbai became a cinch, she’s even managed to bring in Callebaut chocolates.

The numbers for the RoRo service tell a story: In the first fortnight of launching operations, it ferried 5,000 people, 1,200+ cars and 270 two-wheelers, even while running at a 50 percent capacity due to social distancing. “While we started with a single journey each way, we increased it to two boats for the weekends and now run three services each way,” says Devika Saigal Kapoor, the director of M2M Ferries, which runs the service.

With the RoRo bringing Alibaug within a stone’s throw from Mumbai, the demand for properties has shot up. Nikhil Gupta, proprietor, Kapital One Real Estate, is now looking at Alibaug to expand his operations as real estate prices go on an upward spiral. “Bungalows that were earlier between ₹8 crore and ₹11 crore have moved to the bracket of ₹11 to 14 crore, and land prices that used to be quoted at ₹2 crore an acre are now between ₹2.7 crore and ₹3 crore,” says Gupta, who has lived here since March.

“Alibaug was mostly considered a second home option, but with extended remote work, buyer preferences have changed. Many are now mulling the possibility of living and working from here, with travel to the city when required, making it their primary residence rather than being holed up in smaller homes in the city,” adds Anuj Puri, chairman, Anarock Property Consultants. “For this reason, despite Covid-19, property prices have largely maintained status quo over the last year.” As per Anarock research, average property prices in Alibaug range anywhere between ₹6,000 per sq ft and ₹12,000 per sq ft.

The growth of camaraderie through WhatsApp groups that exchange notes on issues ranging from plumbers and electricians to doctors and even trading extra RoRo tickets has facilitated community-building that may draw even more Mumbaikars in the days and months to come. Will the city’s premium F&B ventures continue to explore this new frontier? Too early to tell, is the unanimous verdict. Sanchez of Americano, for instance, is mulling an auxiliary kitchen that could facilitate delivery in the future—“Not a restaurant, since there’s not enough business to justify that” —while Sadhu of Masque isn’t keen to turn Masque into a brand that delivers in the long run. But, by helping them fight for survival (read pay salaries to the staff and keeping the businesses going), Alibaug has turned into the most pleasurable getaway for Mumbai’s luxury F&B brands for now.