Having grown over four times in two years, HungerBox was gunning for more. Then came Covid-19. Can the institutional foodtech startup now keep the fire in its belly intact? 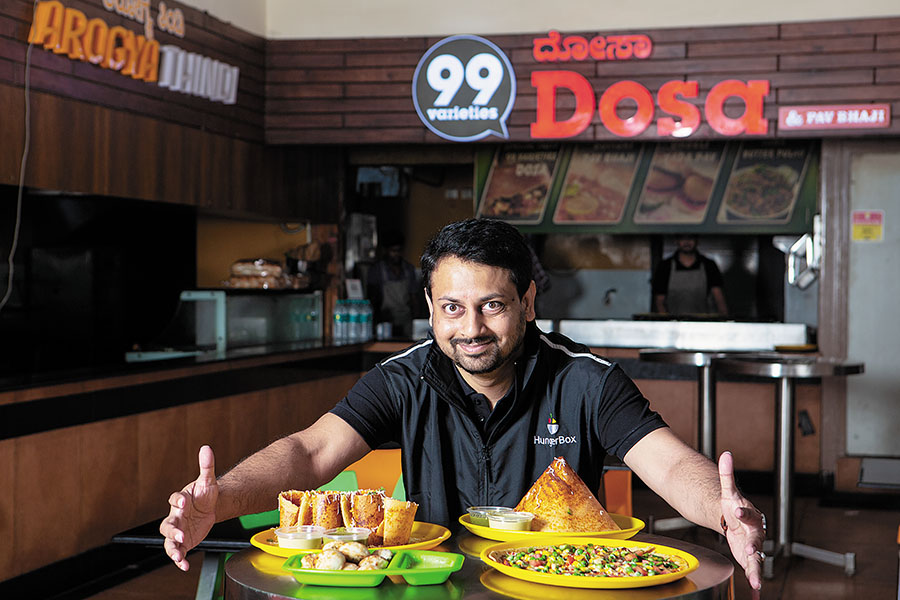 I know treacherous quarters are ahead of us. But we will stay hungry and rebuild quickly: Sandipan Mitra, co-founder and CEO, HungerBox
Image: Courtesy HungerBox

The virtual townhall was scheduled for lunch time on a damp Friday in July. Food, though, was the last thing on the mind of Sandipan Mitra, who was addressing his staff for the first time since the lockdown in March. The soft pitter-patter amplified the inner turmoil of the chief executive officer who was ready for a trial by fire. ‘There would be a glut of questions’ but ‘do I have the right answers?’ mused Mitra who, along with Uttam Kumar, started HungerBox in August 2016.

Around 450 employees logged in through Google Meet at 1 pm. They were hungry for answers. Business for HungerBox, the biggest institutional foodtech startup that provides management solutions to companies to run their cafeterias, and food and beverage business, had tanked by 75 percent. Thanks to the prolonged lockdown, work from home had become the new norm, offices were still limping along across the 18 cities where HungerBox is operational, and cafeterias largely wore a deserted look. From a high of processing over 6.1 lakh food orders every day—the startup was set to touch the million mark by mid-year and make an overseas foray—the numbers had dipped to around 1.5 lakh.

Mitra started his address gingerly, but didn’t mince words. “It’s a challenging environment for us,” he said in a solemn voice. Four years ago, the co-founder added, clearing his throat, there were just four people in HungerBox. “There was no business model, no customers, no brand.” What the co-founders and the team had was an immense belief to pull off something spectacular on the corporate side of foodtech. Mitra’s confidence stemmed from his past. He had built India’s first online foodtech platform HungryBangalore in 2006. Renamed HungryZone soon after, the startup was acquired by UK-based foodtech player JustEat in 2011. After four years, Foodpanda bought out the India operations, exhibiting its hunger to get into a space ruled by Swiggy and Zomato.

Back in HungerBox’s Bengaluru office, Mitra continued with his galvanising talk. “There are treacherous quarters ahead of us,” he said. What will help us survive, he asserted, is the hunger to succeed. The fire in the belly emanates due to a slew of reasons. First, a proven business model: From ₹9.6 crore in revenue two years back to ₹48 crore in March 2020; second, over 158 clients, including seven of the top 10 IT firms; third, HungerBox is the biggest brand in the institutional foodtech space now. “We will rebuild quickly. We will not let the fire die out, and we will stay hungry,” he emphasised, as he gazed on to a picture of Dwayne Johnson plastered on one of his walls. “I’ll never, ever be full. I’ll always be hungry,” reads the quote by the Hollywood actor and former wrestler, popularly known as the Rock. 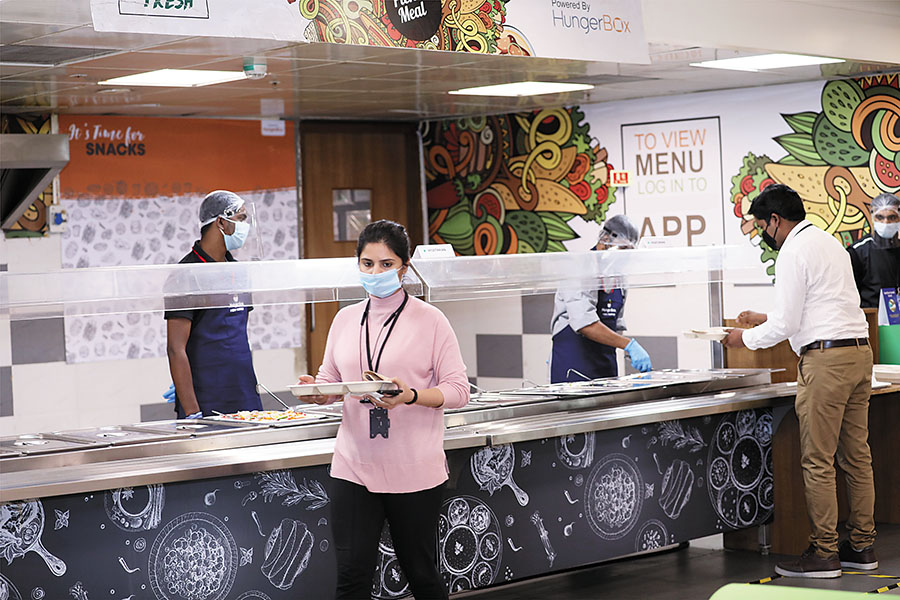 HungerBox is adapting to the new normal of corporates with its digital cafeteria model; Image: Courtesy HungerBox

HungerBox investors, meanwhile, seem to be rock solid in their support as the startup digs in for the long haul. The company was impacted in the early stages of the pandemic, but the management’s agility, tenacity, product innovation and expertise in digital cafeteria management will see it through, says Rajiv Maliwal, founder and managing partner at Sabre Partners, which is one of the backers of HungerBox along with Paytm, LionRock Capital, and Kris Gopalakrishnan. Last December, HungerBox raised $12 million from four investors, including Paytm.

Maliwal is optimistic on two counts. First is the business opportunity. Traditionally, F&B within an institutional setting has been a large market globally, and will continue to remain so. The co-founders, Maliwal lets on, are vastly experienced and by using technology and a thorough understanding of the space, they have scaled the platform impressively. HungerBox’s business—running safe, healthy and tech-led cafeteria—is now more relevant than before, he reckons.

Post-pandemic, HungerBox has rolled out a host of offerings to cater to the new normal. From safe café modules, which include monitoring inflow at cafeteria and food courts, and maintaining social distancing norms using RF (radio frequency)- and Bluetooth-based solutions, to contactless food ordering to tracking the vitals of the kitchen staff, HungerBox is gearing up to meet the needs of a new world.

For Mitra, rolling out new products on a war footing was not easy. Reason: He and his team failed to gauge the magnitude of the crisis. “We thought it’s a month’s phenomenon, or at best for a quarter,” he confesses. Nobody in the world, he reckons, saw it coming or could have predicted the trajectory. The thought process was that post lockdown, people would go back to their offices and things would be normal again. “We never imagined things going this south.”

Food experts reckon that though HungerBox is well-capitalised to tide over the crisis, it will be an uphill task to go north again. Reason: The institutional food market is in a deep flux. “One can get clarity only when the dust settles down,” says KS Narayanan, a food and beverage expert. Covid-19, he underlines, has brought out seismic changes: Work from home is the accepted norm, and reduced out of home consumption is another reality. “HungerBox will have to necessarily factor in these changes in the new evolving model. Till then uncertainty continues,” he says.

For Mitra, his first tryst with uncertainty came early in 2001, when he had a tiff with his father over pocket money. The youngster, who came from Jamshedpur to Bengaluru for college education, landed a part-time job at a restaurant chain on the busy Brigade Road. From serving consumers to working in the kitchen and handling the front desk, Mitra worked in all departments for six months. “It was a great learning experience for me,” he recalls. After finishing college, he joined a call centre, which gave him a peep into night shifts and handling high-pressure jobs. That stint also lasted six months. For the software engineer, the next stop was Wipro, and then Yahoo. 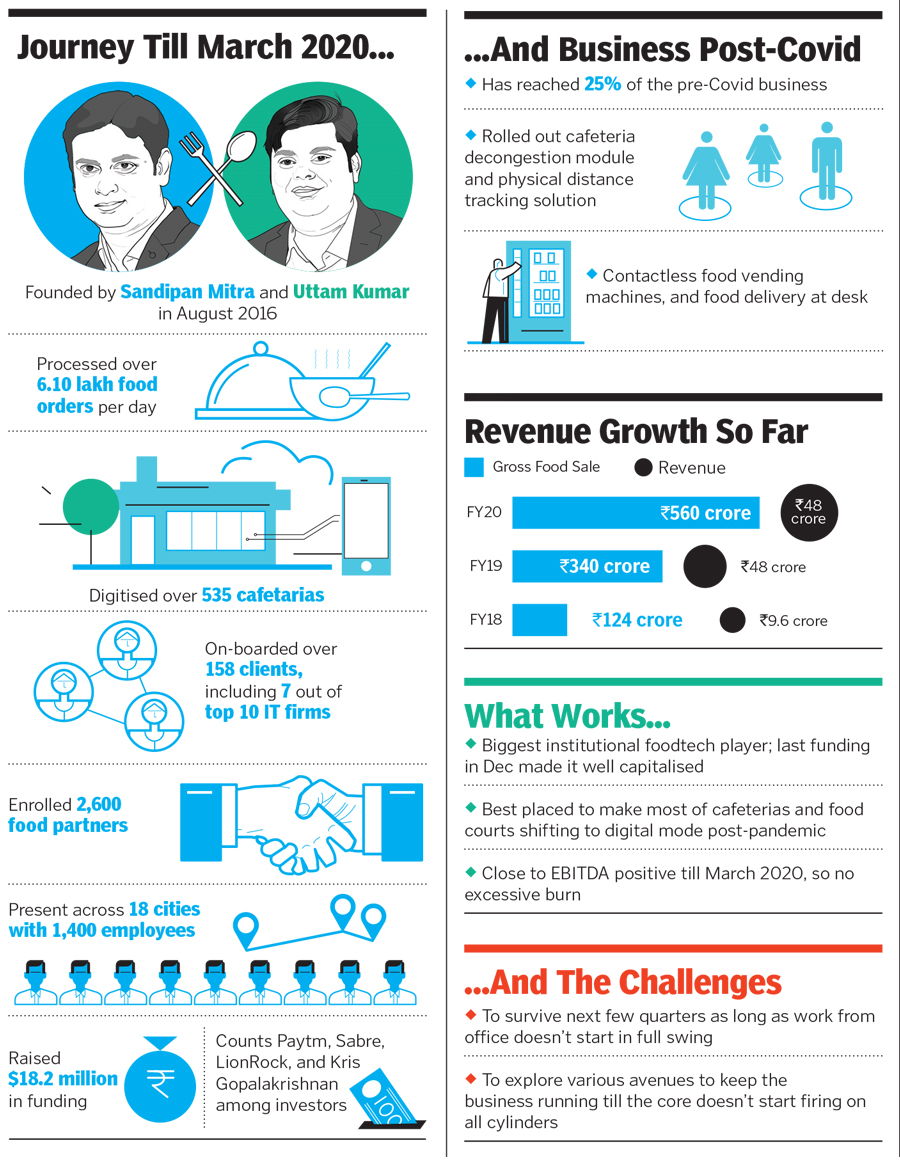 By 2006, Mitra had tried and tested all conventional professional jobs. But the hunger to do something different and out-of-the-box made him start his own venture. The same year, he rolled out online food ordering startup HungryBangalore. The newbie entrepreneur instantly cooked up trouble. His parents flew from Jamshedpur, camped in Bengaluru for over two weeks and tried to dissuade him. “Bengalis mein risk appetite thoda kam hota hai [Bengalis have a slightly lesser risk appetite],” he laughs. Mitra stayed with the company till 2015 when it was acquired by Foodpanda.

In 2016, he joined hands with Uttam Kumar and started HungerBox. The entrepreneur, who thought that a second stint in the food business would be a cakewalk, was soon jolted out of his paradise. Though the business opportunity was massive—the unorganised cafeteria business in institutions and offices across the country was plagued with pilferage, food fatigue and nil innovation—HungerBox had to contend with a food mafia. “There was deep collusion between food partners and junior administrative officials of companies,” he recalls. Mitra, and his venture, were outsiders.

The next big problem was validation from investors. Not being a copy of a business model in the US turned out to be a big handicap. “Some of them wanted to place safer bets, which a consumer food delivery business was,” he recounts. Not having an IIT and IIM background also proved to be a disadvantage. Gradually, Mitra managed to find the right backers in NPTK, Sabre Partners and Neoplux and raised over $4 million till last December.

Then came a turning point—HungerBox raised $12 million from a clutch of investors, including Paytm. What impressed Paytm Founder Vijay Shekhar Sharma was the numbers clocked by HungerBox: Over 2 lakh orders a day. “Numbers bolte hai [numbers speak]. When you will reach a million orders, everybody would notice,” was the one-liner from Sharma. In February, HungerBox leapfrogged to 6 lakh orders per day, and was close to turning Ebitda positive. “We were on course to hit the million mark by August this year,” says Mitra, whose dream run was cut short by Covid-19. In March, the numbers halved; in April they were almost nil; now they’re at 25 percent of  pre-Covid levels.

Can HungerBox survive the torrid phase till companies see the majority of the workforce going back to office? Mitra looks at the silver lining. “We signed 15 clients. This is our best sales quarter [June-August],” he claims. Institutions, schools, colleges, food courts, he lets on, are not going to disappear. The second plus for HungerBox, he underlines, is the need to digitise cafeterias. The companies, which were reluctant to come on board, will now embrace us. “We just need to keep our hunger intact.”

Tweets by @forbesindia
Underwriting prickly patriots for an era of Atmanirbharta
Schools, cinemas, swimming pools: Find out what unlock 5.0 means for you