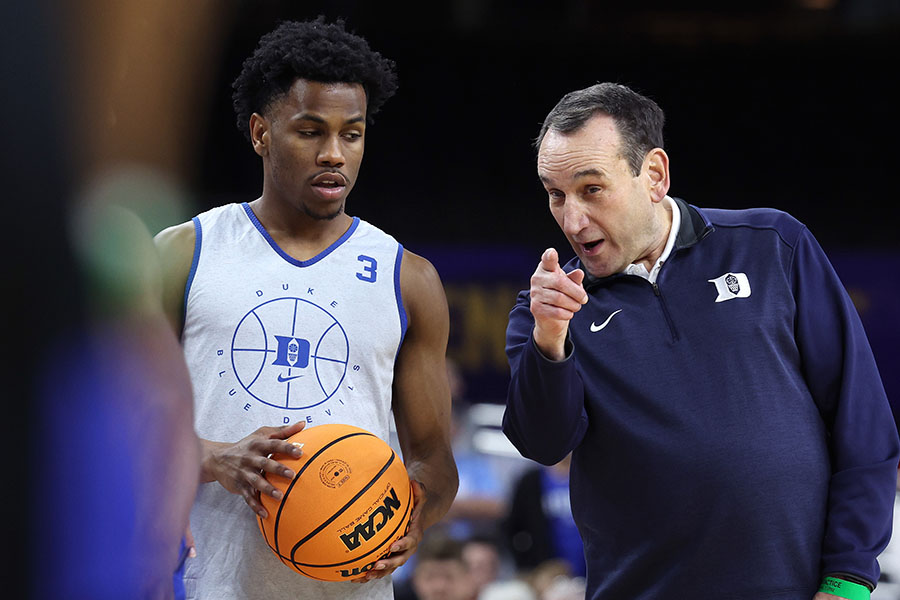 Mike Krzyzewski may be retired as Duke men’s basketball coach after 42 years at the helm, but as he is quick to point out, “I’m not retiring from life.”

Krzyzewski, will continue his two-decade-long relationship with Duke’s Fuqua School of Business, where he is the namesake of the Fuqua/Coach K Center on Leadership and Ethics.

In a conversation with Fuqua Dean Bill Boulding as part of the school’s Distinguished Speakers Series, Coach K, the all-time winningest coach in Division I men’s college basketball, spoke about effective leadership, offered career advice for business school students, and shared personal anecdotes about some difficult moments in his Hall of Fame career.

Surround yourself with the right people

Throughout his life, Krzyzewski said he has sought advice from people who know him well and who have his best interest at heart. As an example, he spoke about his parents’ persistence that he attend the U.S. Military Academy because they felt that would be best for their son’s future, even though he wanted to attend college elsewhere.

He said having people in your life who aren’t afraid to tell you hard truths is so important because, when faced with a difficult decision, you can confidently ask them, “What do you think?”

Don’t be afraid of difficult conversations

Krzyzewski, a former captain in the Army, said if someone is not living up to the standards of your team, you must address the matter immediately.

As coach of the U.S. Olympic men’s basketball team, Krzyzewski felt he needed one of his stars, the late Kobe Bryant, to adapt how he was playing. Krzyzewski said he worried about how the conversation would go, but Bryant not only agreed to change, he agreed that change was needed.

Also read: Take 5: How to be a better mentor

A recipe for success

Coach K said he knew at age 16 that his passion in life was to be a coach. He encouraged people to follow their dreams by staying hungry, trying their best, creating the right team – and then respecting and empowering that team.

After several years of coaching, Krzyzewski decided the best way to build a winning culture was to set standards for his teams, versus hard rules. He trusted if players knew the standards, they could make the best decision in the moment.  This approach worked not only at Duke, where his teams won five national championships, but with star-studded U.S. Olympic teams, which as its head coach he led to three consecutive gold medals.

After a loss in the ACC Tournament at the end of his third season at Duke, many called for Athletic Director Tom Butters to fire Coach K, who at that point had a losing record at Duke. Instead, Butters signed Krzyzewski to a contract extension that set the stage for a career of unparalleled success.

Then, during the 1994-95 season, Krzyzewski underwent back surgery, then tried to return to the bench only to encounter both physical and mental health issues. He credits Butters and former Duke President and noted psychiatrist Keith Brodie for helping him regain his equilibrium.

Also read: How leaders can build resilience in teams

Ending a chapter in his career

Even though his coaching career ended with a Final Four loss, Krzyzewski said he was not sad with the result, but rather proud that his team had advanced to his sport’s biggest showcase.

As he exited the floor that night, he said his thoughts were focused squarely on his players, many of whom were crying, because they wouldn’t have a chance to play for a national championship.

Tweets by @forbesindia
As per JPMorgan, 13 percent of people in the U.S. have held crypto at some point
The Mayor of NYC stands by his pledge to make the city a crypto hub