The name "Evergrande" has barely been mentioned by top state-run news outlets in recent weeks, even as the company's uncertain fate has rattled global financial markets 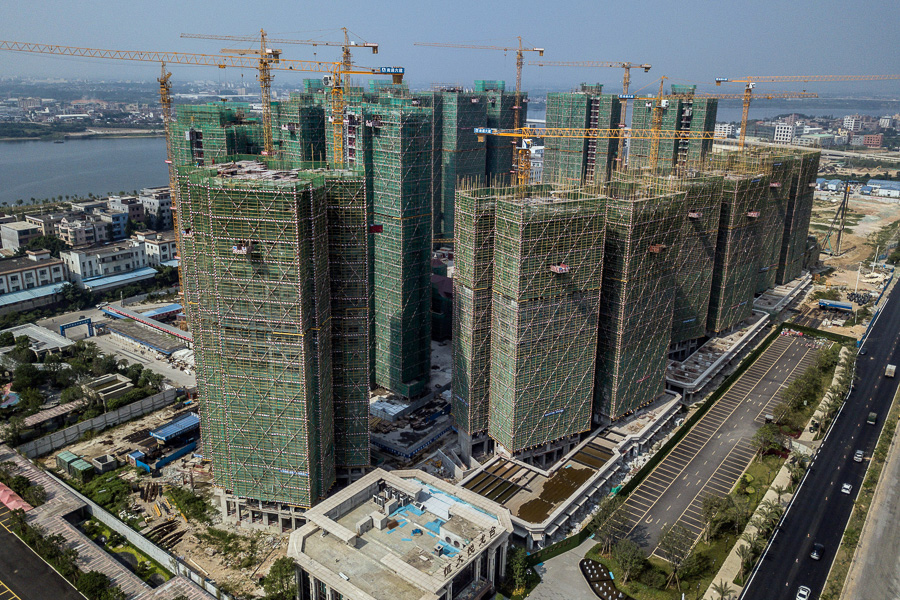 A China Evergrande Group construction site in Dongguan, China, on Sept. 28, 2021. Officials want to avert public panic about the property developer’s financial woes, but they also want to send a message to spendthrift corporations.

Image: Gilles Sabrié/The New York TimesAs China Evergrande Group teeters on the edge of collapse, videos of protesting homebuyers have flooded social media. Online government message boards teem with complaints and pleas for intervention to save the huge property developer. The hashtag “What does Evergrande mean for the real estate market?” has been viewed more than 160 million times on one platform.
But if trouble threatens for China’s economy, you would not know it from reading the country’s front pages.

The name “Evergrande” has barely been mentioned by top state-run news outlets in recent weeks, even as the company’s uncertain fate has rattled global financial markets.
Coverage of its recent troubles has been concentrated in a handful of business publications.
Only on Friday did the country’s central bank comment on the company by name, more than a month after anxiety about its debt crisis began lighting up the Chinese internet — and then only to say the situation was under control.
The split screen reflects the tenuous balance that the ruling Communist Party is pursuing when it comes to the property behemoth, which is straining under $300 billion in debt. On the one hand, Evergrande’s crisis is too big to suppress completely. With concerns about the developer still spreading, China’s housing market is slumping, with potential ripple effects for the entire economy.
On Monday, China reported that its third-quarter growth had slowed significantly, hit by problems in the property market, tight supplies of electricity and other problems.
But authorities are also eager to avert public panic, which could be triggered by too much publicity of Evergrande’s woes. The official silence could also send a message to spendthrift corporate executives about facing the consequences of their actions — a message in line with Beijing’s broader attempts to rein in the private sector.
“Why should we tell you we’re going to bail you out? We might not,” Ting Shi, a lecturer at the University of Hong Kong’s journalism school, said of the government’s mentality.
“We’re not going to show our cards right now.”
So far, the approach seems to be working. While speculation about Evergrande’s fate has remained a popular topic on social media, the tenor of the discussions does not seem overly alarmed, Shi said. When the U.S. secretary of state, Antony Blinken, urged China to act “responsibly” in managing Evergrande earlier this month, citing the potential global ramifications, many on Weibo joked that Blinken must have invested in the company.
The official media’s approach to Evergrande has evolved as the crisis has ballooned.
This summer, before the developer’s troubles had drawn so much attention, state media did raise alarms about its practices. China Central Television, the state broadcaster, and People’s Daily, the Communist Party’s main newspaper, published articles in August about central bank officials summoning Evergrande executives to discuss its debt. China National Radio also reported on suspended construction at certain Evergrande sites, citing contractors that had not been paid.
But last month, what had been a somewhat niche concern exploded into public view as rumors spread that Evergrande was about to go bankrupt. Hundreds of the company’s investors, employees and vendors gathered in cities around the country to demand their money back. Images of the protests were shared widely on social media. Some users issued calls for others to join.
The fervor was so intense that Evergrande issued a statement blaming “sustained negative media coverage” for exacerbating its financial problems by driving away homebuyers.
Government censors began stepping in. Calls for demonstrations disappeared from social media. Virtually no state media outlets covered the protests. Some articles about Evergrande’s history of risky lending practices, by independent-minded financial outlets such as Caixin, were censored on WeChat.
Global Times, a stridently nationalist tabloid, shared an article with the headline “Western mainstream media likes to exaggerate any of China’s smallest problems into a crisis.”
“No, this country is not facing a ‘Lehman Brothers moment,’” the article said.
Still, the restrictions have been porous. Some photos of protesters occupying Evergrande offices remain online; so do hundreds of posts under the Weibo hashtag “Evergrande headquarters is under siege.”
Caixin’s article, though censored on WeChat, was still available on its website.
And on government comment forums, posters around the country have asked when construction will resume on apartments they already paid for.
Grace Leung, a scholar at the Chinese University of Hong Kong who has studied China’s media landscape, said allowing some expressions of discontent could serve as a sort of safety valve to prevent even larger protests if the crisis spiraled out of control.
“If you suppress everything, all of a sudden if the company has some big problem, then people will find it difficult to digest,” she said.
Indeed, the propaganda strategy appears to have shifted slightly again in recent weeks, as public concern has remained high and the housing market has continued to suffer.
In late September, China’s central bank issued a statement promising to “safeguard the legitimate rights and interests of housing consumers,” without mentioning Evergrande.
People’s Daily immediately reported it.
Then, on Friday, central bank officials mentioned Evergrande by name for the first time.
Zou Lan, the director of the financial markets department, said at a news conference that the risks posed by Evergrande were “controllable” and that the overall real estate market was healthy. He promised that local governments would ensure construction resumed.
“The problem of Evergrande Group is an isolated phenomenon in the real estate industry,” Zou said, in remarks widely covered by state media. (In fact, other Chinese developers have reported financial troubles.)
The central bank’s governor, Yi Gang, echoed those comments at a separate conference Sunday. And Monday, Fu Linghui, a spokesperson for the National Bureau of Statistics, downplayed the property market’s impact on China’s economic slowdown.
But if officials at Evergrande were hoping for similar reassurance, Zou offered none.
“In recent years, the company has been managed poorly and was unable to operate prudently according to changing market conditions,” he said. “This has caused serious deterioration in its operating and financial indicators, and ultimately risks broke out.”